Share All sharing options for: Ricky Stanzi Has Loved America Since At Least The Waning Hours Of Last October

From the FanPost section, Old Glory gets gloryerer: 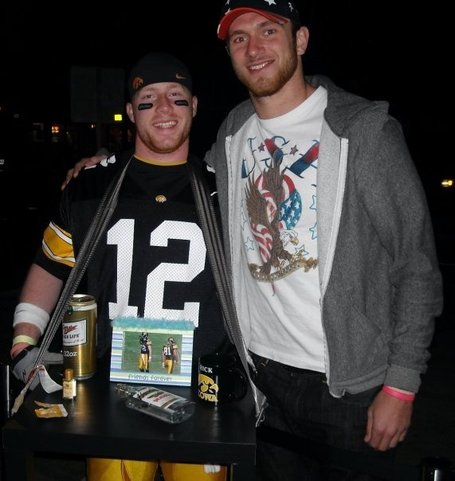 Commenteur Ill Jukes says it's "from a friend of a friend's Facebook," so there's that. We'll go ahead and assume this picture took place last Halloween; there would really be no other reason for a man to dress up like the unidentified gent on the left. At first we thought it was the old "one night stand" costume gag, but then the whole Stanzi motif to it all made the double-entendre really weird. We're not going to think about it too much longer. All we know is costume = Halloween = guy never wears that again.

On the other hand, we hope Ricky Stanzi wears that outfit every day, because holy shit yes. On its own, that t-shirt is all sorts of white trash fabulous, a divine mix of Ed Hardy and Pat Angerer's right arm.

But that hat; my God, that hat. We don't know where he got it, only that he either spent under $2 or over $100 for it. There's really no inbetween. We knew Stanzi was up on that USA Number One, but we never knew he could accessorize it like that. You know whose company this places him in:

Knock knock. Who's there? America.

Damn straight; the boss himself. But we have a serious question, one we can't answer ourselves. Which one of these is better? You a hat man or a tie man? Whose sartorial salute to the stars and stripes shines supreme?