Share All sharing options for: It's Not Plagiarism If You Link To It Is Already Pining for September

Well, so much for that decade.  I don't think anything really cool happened, right?

Have we looked into whether or not Stanzi is color-blind?  Seriously?
In case you're not done reliving the Glorious Orange Bowl Triumph (we predict we'll be done celebrating it around July), our blog-buddy Bama Hawkeye has a great recap over at the always-excellent The Rivalry, Esq.:

4) Ricky Stanzi is so predictable.  In the eleven games that he played in, he completed a touchdown pass, or handed off the ball for a touchdown, to the white-jerseyed team in nine of them.  This is ridiculous, but look at the teams that wore white

He's been maddening, but he's also been brilliant.  The first two drives of the Orange Bowl were literally perfect.  8-8, two TD passes.  His scramble away from Derrick Morgan, who hardly seemed like a first round draft pick on Tuesday Night, was clutch.  Finding Trey Stross for a third down reception that kept the final touchdown drive going was beautiful.  Is it too much to hope that he takes another step forward for next year?  Probably not.  To be safe, should Iowa consider wearing the white jerseys at home as well as on the road? Probably.

Bama also notes that Iowa has now gone 30 games without allowing an opposing team to score 30+ points, the best-such streak in FBS football.  So just in case you weren't impressed enough with our eight-toed genius at defensive coordinator, doff your cap again in appreciation of Norm Parker and his ironclad defense.  The last team to crack the 30-point barrier against Iowa?  The Fightin' Wilford Brimleys in 2007.

Now, if you had told me that the bowls were operating under Opposite Day rules, I would have picked differently. 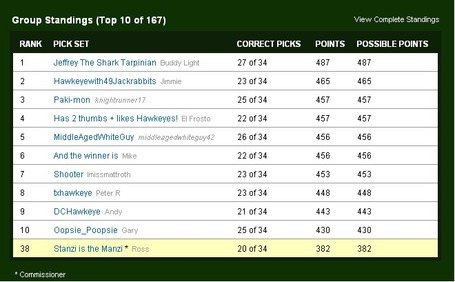 That's all just commissioner-speak for "How my ass taste?"

This was the season of Big Ten revenge.

"We did better than we were predicted to do. We won a lot of big games, lost some close games but I would say it was a very good postseason, certainly better than the past couple years," Big Ten commissioner Jim Delany said by phone from the national championship game Wednesday.

That's a public statement befitting the most powerful man from our very Midwestern conference: modest, slightly humble, understated.  Privately, of course, Jim Delaney is lighting victory cigars with $100 bills from the Big Ten media deals and calling the other BCS commissioners at 2 A.M. to play this song. 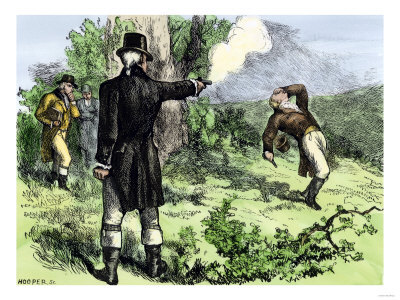 Did he really just shoot him in the eye?  That's just cold.

Does this mean they're giving Metcalf a loaded gun?  I don't think they thought this "duel" thing through.
The Iowa wrestling team is back in action this weekend at the National Wrestling Coaches Association (NWCA)/Cliff Keen National Duals in Cedar Falls, IA.  As the name implies, it's a tournament to determine the best dual meet team in the nation.  Or at least the best dual meet team among the 16 teams in attendance -- and since the field includes eight of InterMat's top ten teams (#1 Iowa, #2 Iowa State, #3 Ohio State, #5 Minnesota, #6 Central Michigan, #7 Maryland, #8 Cornell, and #9 Boise State), it's pretty fair to say the winner is the best dual meet team in the land.  Iowa is the two-time defending champion and the 1-seed; the full draw is here.

Iowa is the favorite to win, despite uncertainty at some weights.  Dan Dennis is apparently good to go at 133, but 141 is still unclear, since Joe Slaton's eligibility issues remain apparently unresolved.  If he can't go, Montell Marion will get the nod.  157 remains as muddled as ever, Luke Lofthouse will be filling in at 197 for the foreseeable future, since Chad Beatty is out until March with a fractured foot, and Dan Erekson probably still isn't quite ready to go at heavyweight.  Last year, Iowa defeated Nebraska, 22-11, in the finals of the National Duals; this year they meet in the first round and Nebraska will be without their stud, 157-lber Jordan Burroughs (out for the season with an imploded knee).  Iowa should win that dual fairly comfortably, but it could get interesting after that.  Boise State should be their second-round opponent and they have top-tier guys at 133, 157, and 184.  Iowa could meet either Minnesota or Central Michigan in the semifinals and likely either Ohio State or Iowa State in the finals.  LiveSportsVideo is purportedly offering a free webcast on Saturday and Sunday.  ESPNU will have tape-delayed coverage of the finals at 3 P.M. CST on January 15.