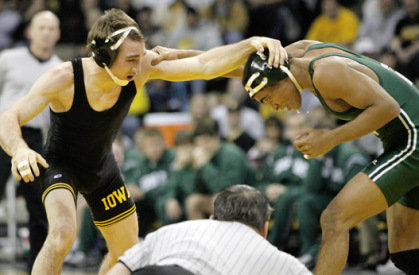 The #1-ranked Iowa wrestling team continued their scorched earth march through the season, dispatching unranked Michigan State 37-0 for their 56th consecutive dual meet victory (23rd in a row at CHA) and sixth shutout of the season (a new school record).  Hell, it was their second shutout over a team from Michigan this year, having done it to Big Blue nine days ago, 36-0.  Something tells me home mat advantage isn't going to help Sparty or Michigan too much at the Big Ten Tournament a month from now.  If a 37-0 winning margin doesn't properly convey how thorough this ass-kicking was, consider this: Michigan State got one takedown the entire meet (against Luke Lofthouse at 197 lbs.).  ONE.  Iowa usually reserves that level of bitchmaking for the likes of Cornell (not the good one) or Iowa Lakes.  In fact, guess who scored more team points against Iowa than Michigan State?  Coe.  Kohawks represent!

FINAL RESULTS (analysis and whatnot after the jump)
(rankings from InterMat)

The most significant win of the night was #6 Dan Dennis' dramatic 3-2 win over #1 Franklin Gomez at 133 lbs.  Dennis was one second away from securing securing a riding time point when Gomez escaped with thirteen seconds left in the third period; Dennis went on to win the match in overtime.  Given the rankings, Gomez's unbeaten streak (he hadn't lost a match since last February), and the fact that Dennis was just a few weeks returned from a lengthy injury lay-off, this does qualify as an upset.  Still, as Andy Hamilton pointed out, Dennis had won three in a row against Gomez heading into this dual, so it's not exactly a stunning upset -- Dennis kinda seems to have his number.  Hopefully he can avoid imploding down the stretch like he did last year, when early exits in the Big Ten and NCAA Tournaments prevented him from having a chance to beat Gomez when it really matters (with Dennis out of the way, Gomez went on to win both titles).

Beyond that, there's not a great deal to say about this meet.  MSU looked like a badly overmatched opponent heading into this dual and the final result exposed the truth in that sentiment.  To Iowa's credit, they did exactly what they needed to do and didn't mess around or wrestle down to their opponents' level; two guys recorded pins (McDonough, Metcalf), and four guys didn't let their opponents score a single point on them (Marion, Janssen, Morningstar, Borschel).  That's pretty complete pwnage.  McDonough once again got the meet started with a bang, Marion kept things rolling after Dennis' big win (and bounced back nicely from his own upset loss in the PSU dual on Friday), Metcalf was his usual MURDERDEATHKILLPIN self (and notched his 12th pin of the year in the process), Morningstar recorded one of the most dominant 3-0 wins you're ever going to see, Borschel smothered his way to a solid win (and wasn't too far from picking up a third pin on the night for the Hawks), Keddy looked like the Keddy of old in steamrolling his opponent, Lofthouse successfully finished his shots and got a solid win, and Erekson came out on fire to lock up the shutout.

If you wanted to quibble, you could point to Erekson's lackluster second and third periods (although that's almost certainly a result of his lack of conditioning after the long injury lay-off and should improve over the course of the season) or Keddy's failure to secure a major decision (but he only failed because he gave up an escape in order to try and secure more takedowns -- hard to fault a guy for staying aggressive to the very end).  The only real concern is the same we've had all year -- the quagmire at 157 lbs.  Janssen got the nod here since Jake Kerr wrestled in the PSU dual on Friday night, but he didn't do much to impress.  Beating a guy with a losing record by a score of 1-0 is not exactly a good way to lock down a roster spot, especially when Kerr knocked off #5 Cyler Sanderson on Friday.  Kerr would seem to be the favorite to take control of the spot now, but don't write that in ink -- inconsistency has been the order of the day all year at 157 lbs.  But that's some pretty minor shit to complain about; wins don't get much better or more dominant than this one.

UP NEXT: Um, Utah Valley on Saturday, February 6 at 8pm CST; no live TV (lol) or even BTN.com live streaming coverage for that dual.