Gabe Kaplan and his amazing Jewfro pwn you too, Cael.

Cael Sanderson, the other Iowa State wrestling legend to leave them in the lurch to coach a BXI school, brought his new team, the #13 Penn State Nittany Lions, to Carver-Hawkeye Arena on Friday night to take on #1-ranked Iowa.  How'd it go?  Well, just like every other time a Cael Sanderson-coached team took on a Tom Brands-coached Iowa team: he lost.  This time, in fact, he didn't just lose -- he got his ass straight up handed to him and Iowa got its 56th straight dual meet victory.  And just like it did when he coached Iowa State, it felt gooood.  If beating Cael ever stops being fun -- nah, fuck that, it'll never stop being fun.  Still, while the outcome of the meet wasn't really in doubt (especially after 157), the meet wasn't without drama.  Three of the matches ended in upsets (including both of Penn State's wins) and four of the matches (141, 157, 165, 184) went right down to the final whistle (or beyond, in the case of 141).

Oh, and props to the student section for some of the chants tonight.  "Cael's for sale," "Cael's a sellout, " and "Cael's no Gable" were pretty great.

(all rankings from InterMat)

Marion followed up the victory against Parks by throttling Michigan's Mark Weber 19-6 and decking 17th-ranked Archuleta on Sunday. He said it's helped to break things down to a simple philosophy: I've done the work, now go perform.

"(The coaches have) given me some helpful things, but mostly, it's just me figuring out what it takes and what I need to do and the mindset I need to be in that's gotten me to another level," Marion said. "At this point, I feel like it's going to be hard (for opponents) to deal with that level and that confidence when I go out there and wrestle that way."

Something tells me that confidence took a hit after his performance tonight.  To his credit, Lynch wrestled pretty well: he defended Marion's shots well for the most part and his own moves were well-taken.  His winning takedown was controversial, but that's largely irrelevant: Marion has beaten guys far better than him in recent weeks and should have been able to beat Lynch as well.  But he looked like a guy who'd been reading his own press clippings and was convinced that as the #5-ranked wrestler in the country he'd just roll through an unranked kid with a losing record overall.  Unfortunately, it still hasn't clicked for him that he needs to have the same mindset against lesser opponents that he has against the big boys.  Consistency remains his biggest flaw. 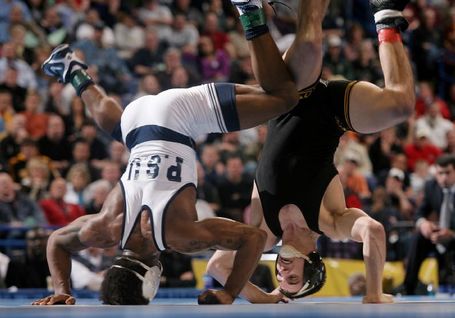 Yes, Bubba's gone, but I've been dying for an excuse to run that pic for months.  So nyah.

Unranked Michigan State at 6pm CST on Sunday, January 31.  No IPTV coverage; just live streaming on BTN.com for $2.99.  The bout to watch is Dan Dennis-Franklin Gomez at 133 (Gomez is #1 in the nation); other than that it should be an Iowa rout.