Share All sharing options for: We Must Break You: PENN SCHTAAAATE WEEK / Iowa-Penn State OPEN THREAD

PROGRAMMING NOTE: Let this thread also serve as your open thread to discuss the PSU-Iowa meet tonight.  We'll be here with results and as much mocking of PSU and Cael Sanderson as we can manage in two hours.

Iowa always makes Cael Sanderson feel SO WELCOME when he comes to CHA.

SHARK WEEK hits Iowa City?  Andy Hamilton checks in on Nate Moore to see how he's coming after that nasty staph infection earlier in the month.  The details are a bit gruesome:

Nate Moore’s right knee looks like he could have been the victim of a shark bite. There are a couple incision marks on his right wrist where he underwent surgery, and there’s a wrap on his left shoulder where he had yet another operation.
But three surgeries and 11 days of hospitalization later, the Iowa wrestler is recovering after a staph infection knocked him into the intensive care unit at University of Iowa Hospitals and Clinics.

He's still recovering his strength (and even the simple ability to walk without a limp), so it's hard to see him returning to the mat anytime this season.  But good luck to him in his continued rehab; see you back on the mat next year, Nate.  In other injury news, Chad Beatty's foot injury is apparently progressing well.

As expected, Erekson shoots into the rankings after finally making his season debut; he should keep steadily climbing the rankings if he performs to expectations the rest of the way.  Good to see Marion's recent great form recognized as well.

PENN SCHTAAATE chatter after the jump...

Maybe Sanderson is lacing their corn flakes with powerful hallucinogens?  Poor Frank Molinaro.  The sophomore 149-lber for Penn State, fresh off a 5-3 defeat to #3 Lance Palmer of Ohio State gets thrown right back into the shit this weekend, facing #1 Brent Metcalf on Friday and #2 Kyle Ruschell on Sunday.  He seems optimistic, which means he's probably been drinking his denialjuice this week:

Though the rankings suggest Molinaro is the underdog in these matchups, he believes he's just as talented as his opponents, and teammate Adam Lynch said Molinaro's mental strength may equal his physical strength.

You get Metcalf fresh off his DQ win last weekend; I'm sure he won't feel like he has anything at all to prove.  Nope.

Meanwhile, after some inactive third periods, there's some concern over the level of conditioning among the PSU wrestlers:

Penn State coach Cael Sanderson admitted after the match he may have ran his wrestlers too hard in practice, which led to decreased energy, but Pearsall thought his third-period performance came from a mental lapse. Pearsall wasn't the only Nittany Lion to fade off in the third period this weekend -- all who did thought a lack of conditioning wasn't a factor in less-energetic third periods.

Sanderson can protest until he's blue in the face (school pride!), but it's not like this is anything new for his teams.  His ISU teams regularly seemed more fatigued later in matches than Brands' Iowa teams when they went head-to-head, so it wouldn't be a shock to see the same issues popping up at PSU.

As far as the meet this Friday against #13 Penn State (7pm CST at CHA; live on IPTV or streamed on BTN.com for $2.99), it should be another solid win for Iowa.  PSU is a step (or three) up in competition from last week's victims, but the matchups aren't very favorable for them (aside from 157).

PSU is badly outgunned at the lower weights.  Pataky is solid, but McDonough has been on such a tear lately, it's impossible to pick against him.  He's looked as good as anyone in his weight class thus far.  The result in Dennis' match could be even more lopsided, depending on how close Dennis is to regaining his pre-injury form; he looked much better against Purude last weekend, so he may really do a number to young Mr. Pearsall, I'm afraid.  Like McDonough, Marion is wrestling with a lot of confidence right now and should be able to take care of Lynch easily.  Despite the jabs up above, Molinaro isn't a scrub at 149... but Metcalf is Metcalf, y'know?  157 is the one weight where PSU has a significant advantage on Iowa and Sanderson should be able to make Janssen pay, unless Janssen wrestles very cautiously.  As always in Morningstar matches against a relatively equal opponent, the result itself is probably a coin-flip and it'll probably come down to the last minute of the third period; I gave Morningstar the edge since he's at home.  JayBo should cruise through poor Ortega.  Keddy looked much-improved last weekend, so I think he'll get by Erwin.  Lofthouse also looked a bit better last weekend, so I gave him the nod, although that match is also pretty close to a coin-flip.  The heavyweight result is largely dependent on Erekson actually wrestling; if Rasing or Johnson go, I'd probably flip the result (although they have proven fairly capable this winter, so a win over Wade wouldn't be the biggest sunner).

As for Sparty on Sunday (6pm CST; no IPTV; streamed live on BTN.com for $2.99), expect more dominance.  They have no one ranked outside of #1 Franklin Gomez at 133 and #13 David Cheza at 149.  Gomez-Dennis is a huge match, though, and should be an excellent measuring stick of how Dennis' recovery is going (it will be significant for the rankings, too, as well as potentially the seeds at the Big Ten and NCAA Tournaments).  But figure a pretty good blowout for Iowa in this one, too. 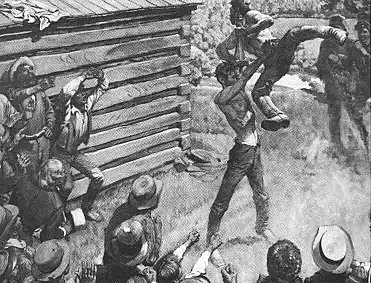 BAH GAWD, HE'S HOISTIN' HIM UP FOR THE EMANCIPATION CHOKESLAM!  IT'S ALL OVER NOW!

Let’s say Penn State wrestling coaches Cael Sanderson, Cody Sanderson and Casey Cunningham have to recruit 10 Civil War-era figures, and they come to me for advice.

Sherman would probably have been a (Iowa Head Coach) Tom Brands-like wrestler: out to break his opponent. Sherman once made a comment that summed this up: "War is cruelty. There's no use trying to reform it. The crueler it is, the sooner it will be over."

Brands once said, "When I come off the mat, I want to feel I got hit by a truck, but I want my opponent to feel like he got run over by one."