Share All sharing options for: Great Moments in 2000's Iowa Football, No. 4 -- The Rise and Fall of City Boyz, Inc. 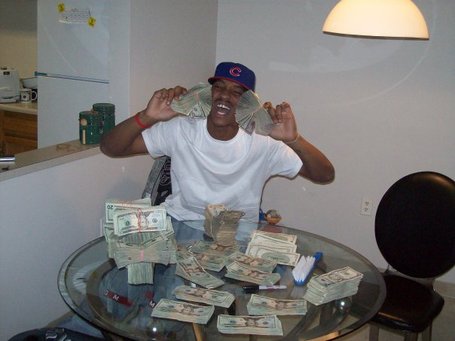 In August 2007, hope sprang eternal.  Sure, Iowa was coming off back-to-back disappointments, finishing one game over .500 for those two years combined, but the talent level was high.  The Hawkeyes returned wide receiver Dominique Douglas, who had been a third-team freshman All-American the season before.  Arvell Nelson was listed as backup quarterback and being mentioned as a Banksian change-of-pace option behind center.  Youngsters like James Cleveland and Anthony Bowman were cracking the offensive depth chart and competing for playing time.

Six months later, they were gone.

On August 20, Douglas and Bowman were arrested for stealing two credit cards, going to a computer at the athletic department, and ordering $2000 worth of hats.  No, I'm not kidding.  They were suspended that afternoon.

The next day, a warrant was issued for Nelson for failing to appear at a hearing on a traffic ticket.  Later that afternoon, the pictures began to surface.  We saw, and believed:  These four had formed a group dubbed City Boyz, Inc. (and get that spelling right), dedicated to liquor, cash, bling, and Dale Earnhardt Jr. jackets.  Because life is one fucking hustle, lawya.

The rest of the dominoes fell from there: Douglas was picked up for shoplifting DVD's out of a Wal-Mart and was officially kicked off the team by the end of September, reappearing in a new set of even-more-ridiculous pictures months later and eventually working his way into a Geico commercial.  Cleveland -- who wore "88" wristbands through the 2007 season as a show of solidarity with a petty thief -- and Nelson were arrested in late February on drug charges and dismissed a week later.  Bowman never saw another practice and quietly slinked off into the night.  Just like that, they were gone, leaving behind a trail of empty Grey Goose bottles and cubic zirconium the likes of which Iowa City has never seen.

We miss them so much.