The Aughts in Review: Still Don't Know What a Hoosier Is

Share All sharing options for: The Aughts in Review: Still Don't Know What a Hoosier Is

Continuing our look back at the decade that was in Iowa football, celebrating the highs and the lows -- and, hopefully, distracting us from the ongoing disaster that is Iowa basketball.  This series looks back at Iowa's results across the entire decade against every Big Ten foe, as well as Iowa State.  According to the alphabet, next up is the red-headed stepchild of Big Ten football, Indiana. 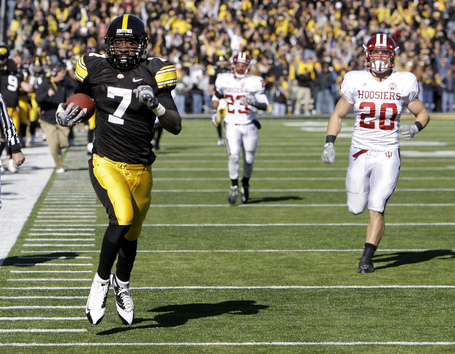 McNutt in yo mouf. 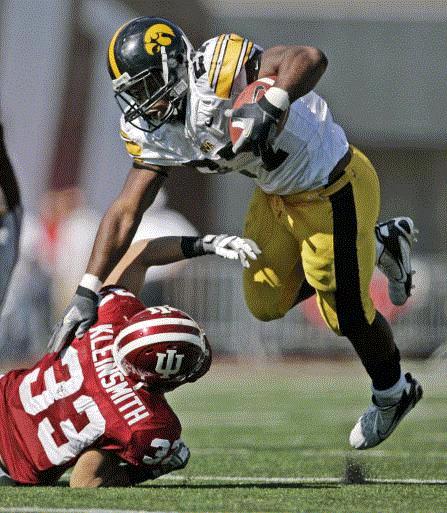 The '09 win was unquestionably the wildest and most exciting win over Indiana in the Aughts, between Sash's pinball pick-six and Stanzi improbably following up four third quarter interceptions with a pair of huge fourth quarter touchdowns, but the '08 win gets the nod because it was actually meaningful.  All wins are nice, obviously, but some wins mean far more for the program than others and this was one of those (at least compared to the other Indiana wins).  At the time, Iowa football was reeling a bit, having lost three straight heartbreakers and dropping the past two games against Indiana.  So they needed a win -- any win -- to stop the bleeding and get some confidence back.

What they got was pure domination.  Behind a punishing running attack (led by Shonn Greene and Jewel Hampton, who both racked up over 100 yards on the ground and a combined four touchdowns) and a solid passing effort from Ricky Stanzi and a defense that completely smothered the Indiana offense (though the fact the two main architects of Iowa's demise the past two years, James Hardy and Kellen Lewis, were gone or injured for much of the game certainly didn't hurt), Iowa got their most dominant conference win in almost six years.  It was just one game and "just" Indiana, but it was still the most impressive win in over two years and the first sign that this team might be something different than the middling outfits from the past few years. 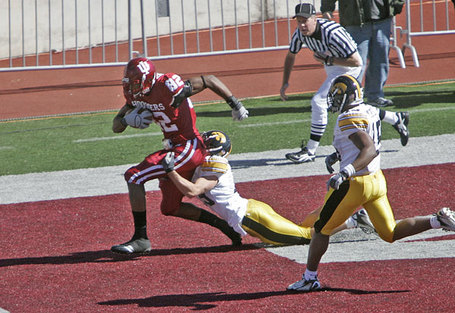 How my ass taste, Shada?

Conversely, this was the game that really sent things on a downward spiral in 2006-2007.  Some people pinpoint the much-hyped Ohio State game from two weeks earlier, but the Hawks actually rebounded to pound a decent Purdue team by 30 points the very next week after that letdown.  Things really went to shit against Indiana, when a couple key turnovers (including Iowa's final play, an interception that deflected off Andy Brodell's then-stone hands) and an appalling inability to cover James fucking Hardy (8 receptions, 104 yards, 3 TDs) led to an upset loss; more losses would follow in five of the next six games (including the bowl game; the lone oasis of hope was a Jake Christensen-led win over Northern Illinois that briefly spurred a QB debate -- yes, this really happened). Iowa was ranked 15th going into this game; they fell out of the polls after the loss and wouldn't return to the polls until the end of the 2008 season.

This wasn't even a loss to the halfway-decent Indiana outfit that went 7-5 a year later and made a bowl game.  This was a slightly-better-than-normal Indiana team (they went 5-7, although one of those losses was to I-AA Southern Illinois so yeah... not good), but still nothing that great.  They followed up their landmark win over Iowa (their first win over a ranked opponent in almost twenty years) by... going to Columbus and getting curbstomped by Ohio State, 44-3.

INDIANA IN THE AUGHTS 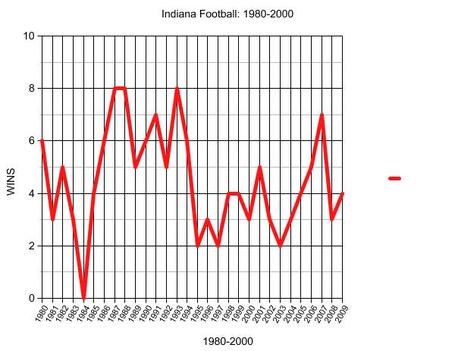 It's been a rocky, um, last three decades for Hoosier football.

It's tempting to say that the Aughts represented more of the same ol' crap from Indiana football, but that's actually not true -- they were noticeably worse than they were in 80s and 90s.  In those decades, Indiana's average record was 5-6; in the 00s, that dropped to 4-8 -- despite the fact that rule changes by the NCAA allowed teams to schedule a 12th game each year and count a win over I-AA opponents every season... changes which should have made it easier to pick up cheap wins.  In both the 80s and the 90s, Indiana went to three bowls in each decade; in the 00s, they made one bowl (the 2007 Insight Bowl).  Their high water mark in the 80s and 90s was a pair of 8-4 seasons (and an 8-3-1 season); in the 00s, they topped out at 7-6 (in that aforementioned 2007 campaign).  By any measure you want to look at, Indiana football was demonstrably worse than it had been -- and it wasn't particularly good to begin with.

Yeah, I'm just as amazed as you that none of these guys was the answer at Indiana.

Not surprisingly, Indiana burned through four head coaches in search for that elusive right fit -- although one of those coaching changes was precipitated by the tragic death of Terry Hoeppner.  The decade began with the end of the Cam Cameron Era, continued with the even more miserable Gerry DiNardo Experiment (his 8-27 mark at Indiana was arguably the worst coaching tenure in the BXI during the 00s; even Brewster's made a few bowls at Minnesota and Turner and Zook made a BCS bowl apiece at Illinois), started showing a glimmer of hope in the Terry Hoeppner Revival, and then began tumbling back downhill in the Bill Lynch Freakout.  The only highlights of the Aughts for Indiana football were a handful of spellbinding individual talents: QB Antwaan Randle El*, WR James Hardy, and QB Kellen Lewis, all of whom should be all-too-familiar to Iowa fans.  Randle El remains one of the most incredible athletes I've ever seen in Kinnick Stadium; he may have been a poor man's Mike Vick for them, but damn he was fun to watch.

*-- It's a travesty that Randle El played before the heyday of YouTube.  (Well, and also that Indiana football fandom is way too apathetic to make highlight videos of anyone, even a once-in-a-generation talent like Randle El.) 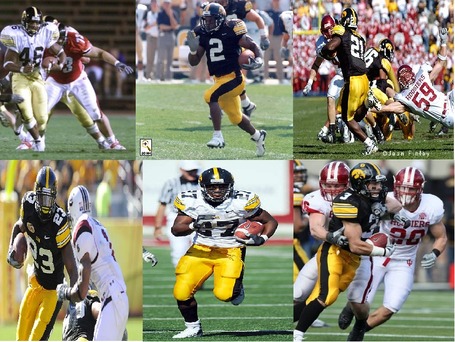 Running all over Indiana defenders: an Iowa tradition.

Yeah, it's a bit of a copout, but in each of Iowa's five wins in the series this decade, they had at least one running back go nuts.  Look at the stats and tell me who you'd pick to single out:

Iowa running backs made a good living pounding the hell out of Indiana's run defense in the Aughts.