Great Moments in 2000's Iowa Football, No. 5 -- In Which Kyle Calloway Proves That Drinking and Mopeds Do Not Mix

Share All sharing options for: Great Moments in 2000's Iowa Football, No. 5 -- In Which Kyle Calloway Proves That Drinking and Mopeds Do Not Mix 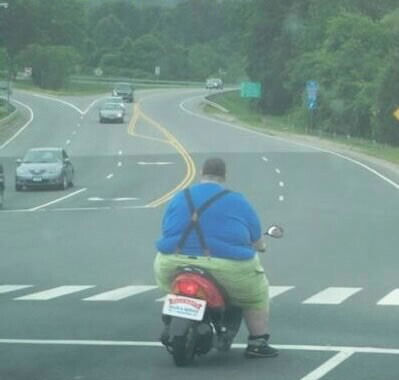 Recycling this pic because BHGP is eco-friendly.  Yep.  Not because we're lazy.  Nope.
Anyone who's lived in Iowa City for any extended period of time has probably had the delight of witnessing Iowa football players tooling around town on mopeds -- they're the personal transportation option of choice for many of our gridiron heroes.  While we salute them for being friendly to the environment, it's impossible not to break out in a gigglefest upon seeing a dude whose notoriety rests on expressions of speed and violence on the field riding a vehicle better-suited for ferrying teenage girls to school.  It's even funnier when it's a lineman, because a fat guy on a moped is, well, a fat guy on a moped -- how are you not gonna laugh at that?
So of course last summer Kyle Calloway decided to demonstrate just how funny fat guys on mopeds could be:

Calloway was arrested after officers stopped him while he driving a moped into a barricaded area.

Police say Calloway was given a field sobriety and a breathalyzer test, which registered 0.106. The legal limit in Iowa is 0.08.

Granted, he's also a world-class dumbass, since (1) driving while drunk is stupid (and dangerous, of course), (2) driving a moped while drunk is even dumber, and (3) driving past police cars responding to an accident while drunk and on a moped is really idiotic.  But no one was hurt, Calloway duly served his one-game suspension against UNI, and we can all point and laugh at a fat guy making a hilariously dumb lapse in judgment.