Mirror, Mirror on the Wall?

Share All sharing options for: Mirror, Mirror on the Wall?

If you are a fan of 1960s B-level sci-fi movies then you might have seen this one---although, even within the movie B world it is a painfully bad film.

The plot goes something like this: a new planet is discovered in the Earth's orbit but on the exact opposite side of the sun. Naturally, two astronauts are sent to investigate the "other" Earth. The plot thickens when the astronauts awaken from their weeks long induced sleep required to survive the long voyage, and crash-land back on . . . Earth.

The pay off sucks unfortunately despite the astronauts indeed landing on another planet, one that is identical to Earth in every way but one---everything on this version of Earth is done backward or in reverse or some such shit. In the end the film misfires at its attempt to be, I guess, Star Trek meets The Twilight Zone. The film was released initially under two titles but eventually the more hyperliteral title won out, Journey to the Far Side of the Sun.

Living here in New York this season has been a bit like living through a pigskin version of this kitschy film. Watching the New York Jets season parallel to the Hawkeyes season has been weirdly, and B-levelly, a lesson in doppelgangers (which, by the way, was the other title for the film).

Okay, doppelganger might be stretching it. I mean, are the Hawkeyes and Jets truly mirror reflections of each other? Not really, no. At least not in the German literature sense of the term. But, in the Journey to the Far Side of the Sun sense of the term, maybe. Is Shonn Greene the "reverse" of Brandon Wegher? Two new guy running backs who come on late in key post-season games to give their team a remarkable lift. Is Mark Sanchez the reverse Ricky Stanzi? Both riddled with interceptions and awkward fumbles during the season that repeatedly placed their steller defense in dangerous situations?

Comparing the teams player-for-player or even unit-to-unit might be an exercise in tedium, but what about their respective fan bases? Both have fans who are annually guardedly optimistic but easily prone to bouts of pessimism. Both fan bases often lament the lack of a national respect.

Bottom line...are the Jets the closest pro version of the Hawkeyes there is?

Okay, prediction time. I see this Colts v. Jets game very much along the lines of the Orange Bowl. The Hawkeyes Jets are facing a team that appears to have an unstoppable offense, that relies on quick, light offensive linemen. A team that also has quick, light defensive linemen. Meanwhile, the Hawkeyes Jets rely on excellent defense and a power running game that is intended to wear down their opponent. The Jets, much like the Hawkeyes did, want the game to go four quarters, and if it it does their confidence grows enormously while the wear and tear of their running attack usually shows in the poor play of the opposing team. Rex Ryan has brainwashed this team to believe they are the '85 Bears but with better corner play. Their QB has become, finally, an obeying muse of their very capable but quirkily conservative offensive coordinator, Ken O'Keefe Brian Schottenheimer. 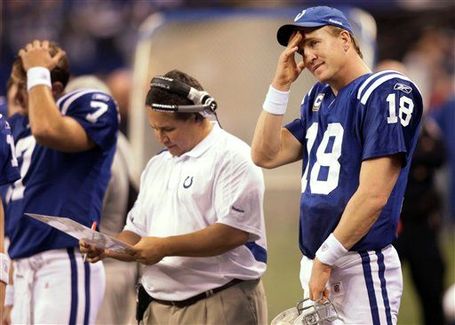 Jets win 19 - 17. Revis shuts down Wayne. No rushing attack for Colts. Jets eschew outside edge blitzes for up-the-middle bull rushes that throw off Peyton Manning. Mark Sanchez completes a long pass to Edwards early that leads to a Shonn Greene touchdown run and inexplicably puts the Colts in a catch-up frame of mind whereby they curiously forget about the run, only to wish later that they had not passed the ball 49 times. Rex Ryan cries in a post game interview.

Saints win 34 - 17. Superdome turns into the Pamplona Bull Run with 13 seconds still left in the game. 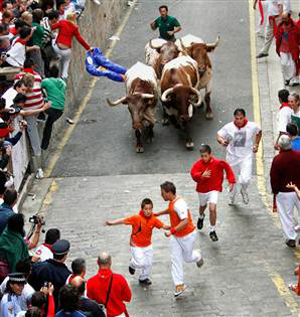