We Must Break You: Grappling News Round-Up

Share All sharing options for: We Must Break You: Grappling News Round-Up 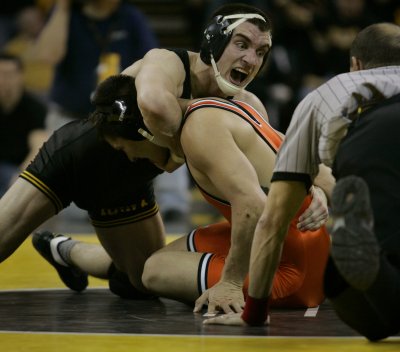 Moments later, Metcalf snapped his head off and paraded it around Carver-Hawkeye as a trophy.
What's Eating Phil Keddy?  The ongoing meh-ness of Phil Keddy this season has been one of the more peculiar subplots of the season thus far; friend of the podcast Andy Hamilton put on his investigatin' hat to try and figure things out.  In other news, Tom Brands would be the most evil personal trainer ever:

"There are some things we have to do that would make a billy goat puke," Iowa coach Tom Brands said on his post-meet radio show Saturday night while his twin brother, Terry, was putting Keddy through the bike workout. "That’s what makes Keddy thrive. (But) he’s got a long way to go. He’s at about 87.5-percent capacity right now."

Long story short: Keddy had an "undisclosed injury" this off-season that cost him a lot of training time, hence the rust early this season.  He's apparently pretty much back up to full-speed health-wise; now it's just a matter of shaking off the rust and regaining the form he had the past two seasons.  He has looked better the past few matches, so hopefully he's on the right track.
In contrast, Metcalf was wearing the skin of a former opponent when he met Brands.  KJ Pilcher, Iowa City's other top wrestling writer, has a tremendous piece on Jay Borschel, who apparently is a bit of an odd duck.

Brands noted a recruiting visit to the Borschels’ home in Marion. Borschel greeted him at the door, wearing a pink blazer, light blue pants, odd shoes and a bucket hat.

"That’s the first time I pulled up to his house." Brands said. "When I pulled up he was looking out the window waiting for us. So when he answered the door, you know, it’s like ‘What in the world fire?’ "

Pilcher also notes the absence of the 'stache (we remain steadfast in our belief that it needs to return) and that JayBo's favorite movie is The Big Lebowski, which means he's definitely good people (and even makes up for the fact that he likes Dave Matthews Band).

For the 146th straight week, we remain #1 in kicking your ass.  Updated rankings ahoy!

For those wondering, Slaton remains in academic limbo.  No word on when (or if) he'll ever emerge.  On the other hand, another former All-American who's been sidelined all year is expected to return very soon -- like this weekend.  Welcome back, Danimal.

Previews?  Previews?  We talkin' bout previews?  Iowa goes on the road this weekend as BXI dual meet season gets fully underway; tonight they're headed to Ann Arbor (still a whore) to take on Michigan at 6pm CST, while Sunday they head to West Lafayette (still like so much worse than East Lafayette) to take on Purdue at 12pm CST.  Neither dual is on BTN (or even its shitty inbred cousin, live-streaming on BTN.com), so you're left with radio via Hawkeye All-Access ($14.95/mo.) or whatever results you can scrounge up on the interwebs (hopefully Hamilton and/or Pilcher will be liveblogging the meets, but I'm not positive on that).

As for what we expect... well, let's see what the Hawkeye Sports preview has to say about our illustrious opponents:

Yeah, we expect nothing but blood and thunder out of these duals.  Iowa has school-record streaks of 52 consecutive dual meet victories and 36 consecutive road dual meet victories on the line in these meets; barring a brain-melting upset, those streaks should be at 54 and 38 come Sunday evening.  We did only beat Michigan 20-16 when last we met (2008), but this LOLverine outfit is substantially worse than that team.  They'll be favored at 197 and it's probably a push at 157 (and possibly Heavyweight if Erekson doesn't go), but Iowa should be favored at every other weight -- usually heavily so.  A 30-6 victory sounds quite plausible, and that's probably being quite generous.

Purdue is a bit better, but they still only have ranked wrestlers at 174 and 197.  They got skunked 38-0 the last time they faced Iowa and I don't think they'll get shut out (197 in particular looks winnable for them with Beatty out), it still probably won't be pretty.  We'll err on the side of (relative) humility and pick something along the lines of 29-6, but something more lopsided wouldn't be shock.  On the other hand, the match-up at 174 should be the match of the weekend as it's the only one to pit two top-10 wrestlers (#2 Borschel of Iowa and #6 Luke Manuel of Purdue).