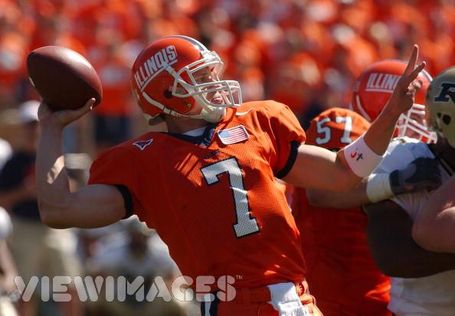 Then 2001 happened, Beutjer fell out of favor, Kyle McCann took over the #1 spot, Beutjer transferred to Illinois, the end, let's all have cupcakes and cocktails, the end.

But wait wait wait. How did Beutjer fall out of favor? Oh, what unfolded and ensued was--if not the most improbable--certainly the most Iowa City-ish of college football problems. Jon Beutjer was a roommate of offensive lineman Sam Aiello, and they--like all Iowa Citians--were dutiful Mediacom customers. Until, for whatever reason, Beutjer was no longer able to pay the cable bill. And boom goes the dynamite:

According to Beutjer, Aiello came home to the apartment they shared at around 6:30 on the night of the incident. Aiello asked for $22 that Beutjer owed him for the cable bill.

"He started pushing me in the back," Beutjer said. "That's all I remember. The next thing I know is I'm on the phone with my mom and dad.

"Fred Russell, my roommate and teammate, got on the phone and said, 'Sam just beat up Jon.'"

If you'll notice, the one common theme of these players--aside from the fact that they were all roommates--was that they were all offensive players. And that means that, just like now, they shared the same coordinator. Oh, did you think you were getting out of this story without KOK putting his mushroom stamp on it? Because you have so much to learn, youngin', about the Tao Te O'Keefe:

"I told Coach O'Keefe that I could no longer live with Sam," Beutjer said. "He looked puzzled and said, 'Brothers fight. Imagine you and your brother fighting. If you guys got in a fight, would you move out the next day?'"

"I said, 'No, but if my brother assaulted me, he wouldn't be able to walk for four weeks, because my dad would have taken care of that."

For what it's worth, Daddy Beutjer never crippled anybody regardless of what Jon threatened. THAT WE KNOW OF.

If Beutjer didn't know where the campus stood on the subject, the legion of team girlfriends who painted themselves in support of Aiello during an early season game sealed Beutjer's fate. There seems to be no evidence of this on any of the Internets, and that's a shame; we personally remember choking on a drink over it when TV cameras captured it. So it went in the dark ages of 2001.

Beutjer would run off to Illinois, where he heroically led the Illini to nine wins. And by that, we mean that in his three years of eligibility in Champaign, Illinois went 9-27. In his only start against Iowa, Beutjer went 12-25 for 129 yards, one interception, and one touchdown (with 49 seconds left) as Iowa won, 23-13. It was a truly unwatchable game in 40-mph winds, and Beutjer was outplayed by backup Brad Bower. We don't know who that is either.

The last we heard from Beutjer, he was failing to get playing time in the Arena League. No word on whether he paid Aiello back--or how many people Papa Beutjer paralyzed. Probably thousands.