Share All sharing options for: It's Not Plagiarism If You Link to It SPENDING G'S THANK YOU VERY MUCH 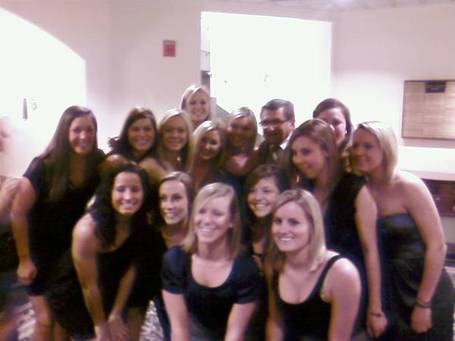 The Light at the End of the Tunnel.  Hawkeye basketball had a good week, grabbing two wins and reaffirming that Pennsylvania is a non-voting protectorate of Iowa.  While attendance numbers remain weak, a couple of well-timed blocked shots and a close finish roused a crowd usually content to wait for the cold release of death.  Perhaps most importantly, this team might have found an inside presence in a newly-healthy Aaron Fuller.  The 6'6" forward sprained his ankle in the third game of the season and is only now back to 100%, leading to back-to-back 20-point, 10-rebound efforts.  As Doc writes, a now-healed ankle and a summer in the weight room are paying dividends:

Fuller, 20, showed flashes last year, including a 16-point effort at Penn State, but he was overmatched inside by stronger, more physical players. Now Fuller can match interior players in strength, and his skill is apparent.

"If you look at him, you can see how hard he’s worked in the off-season," Lickliter said. "He was always a good offensive rebounder, but now he has the strength to add to it.

"You can’t ask a kid to get double-doubles all the time, but as long as he keeps going to the offensive glass like that, he’s going to be very productive."

With Fuller doing his best Reggie Evans impersonation inside and the perimeter offense slowly improving, there is reason for hope.  Add a dash of recruiting speculation here and a bit of Anthony Tucker resurrection talk there, and people could actually get excited about Iowa basketball again.

That is, right up until Sunday's game at Michigan State.  God damn it.

Mark Your Calendars.  Iowa has officially added I-AA also-ran Tennessee Tech as the 2011 opener, drawing the usual chorus of boos and hisses over OMG WEAK SCHEDULING MAN UP.  In the grand scheme of things, as Hlas points out, this is completely unsurprising; Ferentz has long said that his non-conference scheduling philosophy is a BCS-level opponent, Iowa State, a low-level I-A, and a I-AA cupcake.  This game fills a role, just as the Pitt game will two weeks later.  In a climate where Boise State -- for years the biggest complainers about scheduling in college football -- want both complete equality with historically significant programs (who would lose money by going to BSU) and cupcake-esque payouts for their trouble, it's as good as we can expect.

The most interesting aspect of the Tennessee Tech matchup will almost certainly be Tech quarterback Clint Brewster.  Yes, THAT Clint Brewster.  The one who followed his dad from Denver to the University of Minnesota.  The one who was seduced away from his dad's program by Ron Zook in a BHGP fever dream.  The one who is in line to take over the starting job at Tech by the time the 2011 season opens at Kinnick.  WIN FIGHT TRY, indeed.

It Was the Best of Times, It Was the Worst of Times.  National Football League, meet Shonn Greene.

In his most recent podcast, Bill Simmons said he started receiving emails from Iowa fans professing their undying adulation for the Fabulous Mr. Greene and saying how they knew all along he would be a monster halfback.  I can't imagine where we Iowa fans got that impression (all GIFs courtesy of this thread at Hawkeye Report).  It's taken all of two playoff games for Jets fans to forget about Thomas Jones; National Football Post's Matt Bowen (yes, THAT Matt Bowen) argues it's time for the Jets to put Jones out to pasture.

Unfortunately, the other story out of the Jets-Chargers game was Nate Kaeding's epic chokejob.  Even for an All-Pro, missing three field goals in a three-point loss will force the mainstream media into knee-jerk torch-and-pitchfork ranting, and Kaeding, to his credit, faced the media like a man.  With that said, I can count three times he's missed big-game kicks in San Diego, to say nothing of the line drive he hit into the USC line from 30 yards in the 2003 Orange Bowl.  He's a good kicker, and a good man (with a proper appreciation for classical music and its place in football), but this is not a new phenomenon.

The lesson, as always, is that there is no combine drill that simulates on-field performance; NFL executives can learn a lot about their future employees from actually watching college football.  Strange and incredible concept, I know.