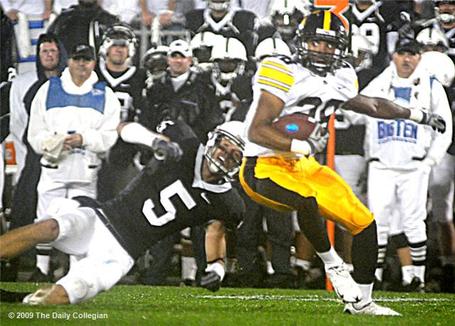 Once, when I was about 11 or 12 years old, my family took a summer vacation to Chicago.  Being typical baseball-crazy tourists, we ate dinner at Harry Caray's Restaurant and Bar our first night in town.  I ordered a cheeseburger and a Coke.  The cheeseburger was average, and the Coke tasted funny.  When I started running into walls, my parents realized their son had been accidentally given a double Captain & Coke.  So what I'm saying is, I know what it's like to be accidentally overserved.

So, too, does Iowa defensive back Shaun Prater.  In early 2009, Prater was picked up for DUI on a Friday night in Iowa City.  He blew a relatively tame (at least by Iowa football standards) .134 on the scene, and had the typical litany of telltale signs (bloodshot eyes, slurred speech, smelled like my Uncle Charlie at 3:00 on Christmas Eve).  When asked about his alcohol consumption, Prater pled ignorance:

"Prater told police his bartender "must have put alcohol in his Coca-Cola," the report said."

That's right: Prater went downtown for an exciting night of guzzling fountain soda at a local establishment, then -- obviously not knowing what it feels like to be intoxicated and thinking he'd just gotten some really good carbonated water -- he got behind the wheel and headed home.  It's not his fault he was running into walls after ignoring the fact that his Coke tasted funny; it's that damnable Harry Caray's.