Shonn Greene Is Our Kind Of Winner: Dominant, Moderately Dickish

Share All sharing options for: Shonn Greene Is Our Kind Of Winner: Dominant, Moderately Dickish 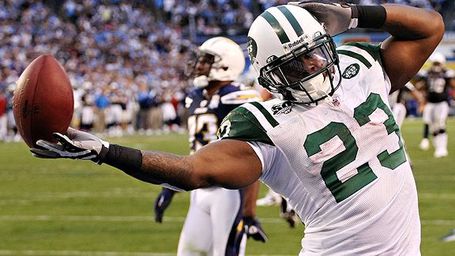 Hey, you put that celebration away! That doesn't belong to you!

That's Shonn Greene, scoring the last 7 of the Jets' points in their 17-14 victory at San Diego today. The celebration--especially as an overt F.U. to an opposing fan base, as so--isn't indicative of Greene's usual behavior when he's in the end zone. He doesn't showboat very often. But, for real, he's allowed some measure of hot doggery after ripping off a play like this:

Final line: 23 rushes, 128 yards, and that 53-yard touchdown. Oh, and--just like he learned at Iowa!--one very trucked safety. Now, if only Rex Ryan had let Greene put the game away on 4th and 1 instead of Thomas Jones. Greene earned that play more than Jones! Thomas Jones wasn't the only guy who could have converted that play. Hell, Thomas Paine could have made it, and he's white.

All in all, well done, Mr. Greene. It's safe to say he was every bit as criminally underrated as the 63rd pick as we suspected. Now do try to avoid pulling off the Marvin Harrison impression should you score at Indianapolis. Please.