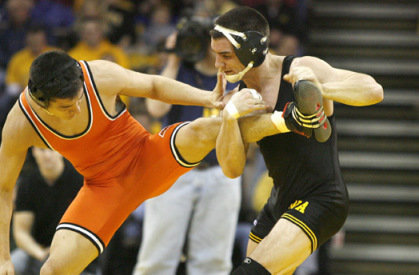 Finally -- VICTORY!  After a long, painful decade of waiting, the Iowa wrestling team has once again triumphed over the dastardly ruffians of Oklahoma State within the friendly confines of Carver-Hawkeye Arena (which housed far more people than witnessed the hoopyball triumph over Penn State earlier in the day).  Oh, and that school-record 52-meet winning streak stayed alive, too.  That's pretty cool.  The meet itself was a predictably tense affair, with some guys stepping up big and some sadly (although not surprisingly) shrinking from the moment.  Each team won five bouts, so bonus points wound up being crucial -- and in that respect, Iowa's three most consistently excellent performers this year (Matt McDonough, Brent Metcalf, and Jay Borschel) once again came through in the clutch.  Full results and some analysis after Ze Jump.

Not to toot my horn too much, but... that's the exact score I called in my preview, although I only got 8/10 winners right (I had Marion losing and Morningstar winning) and didn't get the bonus points quite right.  Still: bask in the glow of my awesomeness.  BASK, DAMMIT.

All that said, there's no way of getting around the fact that this was a great, great win.  With two starters out (Erekson and Beatty), another still not up to par (Dennis), and a presumptive favorite at yet another class unable to wrestle (Slaton), Iowa still managed to go out and pick up a strong win over their main nemesis -- and end that painfully long Okie State winning streak in CHA.  Well done, boys.  Next up is Michigan on Friday evening (no TV coverage); time to pound some LOLverine ass.