Time To Kill The White Whale

Share All sharing options for: Time To Kill The White Whale 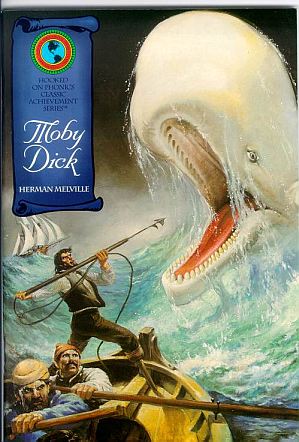 Do you really want to give Brands a spear?  That just seems like a bad POTENTIALLY AWESOME idea.

Tomorrow night, the #1-ranked Iowa Hawkeyes wrestling team will entertain the #3-ranked Oklahoma State Cowboys in front of a packed and enthusiastic Carver-Hawkeye Arena (so it will be a jarring change from the Iowa-Penn State hoopyball game earlier in the day at CHA) in a dual meet dripping with significance.  While it would be downright retarded to call Tom Brands' return to Iowa as head coach anything short of an unqualified success -- who can quibble with two straight NCAA and Big Ten Championships, three consecutive Midlands and National Duals Championships, and a 51-meet (and counting) winning streak, among other accomplishments -- there is one omission on his resume, one little box that's yet to be checked off: a win over Okie State in Carver-Hawkeye Arena. 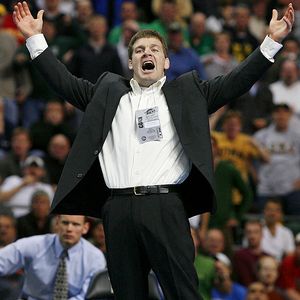 Since his triumphant return to Iowa and the subsequent resurrection of the Iowa dynasty, Brands and Iowa have terrorized the rest of the nation, including two of their biggest rivals, Minnesota and Iowa State (one more win over ISU and Brands' rent-to-pwn contract with them is finished -- hooray!), but Oklahoma State has been more elusive.  It's not that he's never beat them -- they did knock them off just last year, 20-13, down in Stillwater -- but he's never managed to accomplish the feat in front of the black-and-gold faithful in CHA.  In fact, no Iowa team has managed to do that since 2000.  It needs to happen.  Obviously, this one dual doesn't mean much in the grand scheme of things -- it isn't going to have any real impact on the Big Ten Championships or the NCAA Tournament, and those are the benchmarks by which Brands' greatness will be measured and while the 51-meet winning streak is awesome, it's already a school record so he's not chasing that or anything -- but it would be cathartic.  The rivalry with Iowa State is important because it's in-state but in terms of the things that truly matter in wrestling (championships) it's a little brother rivalry, just like football.  Iowa and Oklahoma State are by far the two most dominant programs of all-time in wrestling; Oklahoma State has 34 national championships, while Iowa has 22.  The third-best team, Iowa State, has eight.  That dominance is even more pronounced in modern history: of the past twenty national championships, only three have been won by someone other than Iowa or Oklahoma State (Minnesota in 2001, 2002, and 2007).  (Iowa State's last national championship, for the record, was 1987.  Ha HA.).  These two programs are the alpha and omega of college wrestling. 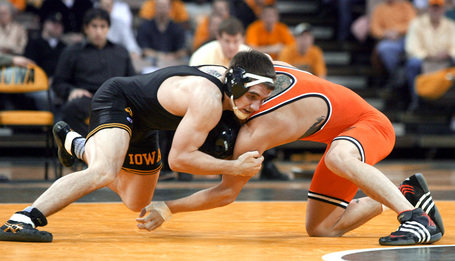 Brent Metcalf, in the midst of introducing an Okie State wrestler to the twin worlds of "pain" and "suffering."

A win would also be a tremendous mental boost for this Iowa team, potentially giving them the confidence needed to lock down another national championship.  Not only would it be a rare win over Oklahoma State in CHA, but it would be a win over one of their top rivals (this year as well as historically) -- and they'd do it with a weakened team.  In the podcast, Andy Hamilton called Iowa's triumph at the National Duals one of the most impressive feats he'd seen in the ten-odd years he'd been on the Iowa wrestling beat (a span that includes multiple national championships, no less).  To win that tournament against a loaded field (eight of the top ten teams in the rankings) and with a depleted roster (no Dennis, no Slaton, no Beatty, no Erekson) really was a tremendous feat.  It's a little staggering to contemplate the guys they were missing in that competition -- Dennis, Beatty, and Erekson have all established themselves as top five guys in their respective divisions and it's not unreasonable to assume that Slaton could do the same at 141 (he was a top guy at 133 and has had success at 141 in unofficial matches this season).  And they still won.  And they won pretty decisively, no less, beating Iowa State by a greater margin than they did at the dual in Ames a month ago and romping past the other teams they faced as well.

Unfortunately, they're going to need to dig deep and come up with another gritty performance again Saturday if they hope to finally knock off Okie State in CHA.  None of the four guys that were missing from the National Duals are expected to be back for this dual (Dennis is still hobbled by an ankle sprain, Slaton is still in academic limbo, Erekson is wrestling elsewhere to shake off the rust, and Beatty is out until March at the earliest) and Nate Moore, who has ably filled in for Dennis lately, has been suffering from the flu.  Iowa should be slight favorites at 125, 165, 174, and 184 (as well as a massive favorite at 149, naturally).  Oklahoma State will be slight favorites at 141 and 157 and potentially very big favorites at 133, 197, and Hwt, depending on who Iowa sends out at those weights.  Iowa will need to get bonus points when they can (big performances out of Metcalf and Borschel would be massive) and avoid giving up bonus points to Okie State (looking at you, Iowa heavyweights).  So dig deep, grab your (metaphorical) harpoons (real harpoons would probably get you disqualified, sadly) and get that fucking whale, boys.

I think Metcalf is going to be extra-motivated to (a) erase the bad taste of his last match (the decision win over Mueller from ISU) and (b) get bonus points because he knows we're going to need them.  And I just love the way Borschel is wrestling right now... Benefiel is no slouch, but JayBo is in the zone.

The meet itself is at 7pm CST, Saturday, January 16 at CHA; it's a "Gold Rush" promotion, so try and wear gold if you're going.