Share All sharing options for: Please Stop Implying That the Iowa State Wrestling Team Is Full of Wankers

[Scene: a sparsely-roofed, manure-littered barn in the middle of Ames, Iowa. The words "MEDIA PAVILIEN" [sic] are painted onto the side of the barn. It is the most modern building in the entire city. Inside, reporters sit on cow carcasses and bales of hay, listening as a coach speaks about his team's latest defeat.]

Hi, everyone. Mind the rats. My name is Kevin Jackson, the Iowa State head wrestling coach. The previous sentence was in no way for the expository benefit of a narrative. No sir. I just always say that.

Awesome. So coach. You lost to Iowa again this season.

Yes, we did. 19-12 was the final score. It was our most humiliating defeat of all time. I'll probably pick up a cutting habit or something.

Hey, did you guys see what Brent Metcalf did after his match?

Oh, you mean when he totally teabagged that Minnesota dude while he pinned him? Because that was awesome.

Wait, so you're just going to be passive-aggressive about it, like a child or a hostile ex-spouse or a talking head on CNN?

Say, I saw it, Coach. He gave it the ol' J/O after he won. Probably had something to do with the fact that Mueller was stalling instead of wrestling for basically all three rounds.

I actually would have preferred if we didn't go there. Oh, and then did you guys hear Terry Brands?

No, Coach, but I assume you'll have something equally passive-aggressive to say about him.

I think Terry Brands is hilarious. I’m telling you. I’m focused on my guys and coaching my guys up. I wish you guys could put a mic down sometime because it’s pretty comical some of the things that go on close to that bench. It’s entertaining to say the least … We’ve been together for a long time and I’d never seen that side really. Maybe that’s his coaching style now. I don’t know.

Wait, why would you say all that if you're focused on your guys and coaching? And if you're so focused on that, why didn't you tell Jon Reader to try to break Morningstar's hold in the last eight seconds?

Look, all I'm saying is that you guys don't even pay attention to all the rude, offensive, and juvenile things the Iowa wrestling team does. Well--well look, Metcalf and Brands are over there right now.

(pays no attention to them)

Look! They're right there!

(does the jack off thing again)

Come on! People! Just look over there!

(does the slow jerk)

Look! People! Look at them!

(farts into a megaphone)

(turns siren thing on megaphone on)

(throws sirening megaphone at a cow's head, knocking it unconscious)

Why aren't you people reporting this? This is outlandish behavior!

What? No, I'm just saying--wait, what are they doing now?

(holds up old copy of Sports Illustrated from 1967)

Put that down! That's our library's oldest, most prized possession!

(cuts a few pieces out, tapes them back together, holds magazine back up) 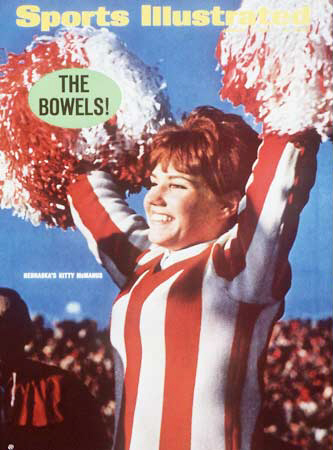 That is over the line! You are making a mockery of this press conference, this school, and this sport!

I apologize a trillion times

Ha, ha! These Hawkeye guys aren't so bad! I'm going to write a few more glowing reviews of these Iowa guys! Not like this sourpuss Mr. Jackson!

And a serial blasphemer to boot!

(start Eiffel Towering some chick dressed as the Statue of Liberty)