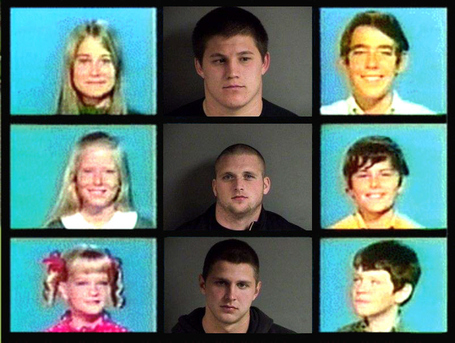 Ah, the spring of 2009.  The weather was warming, the snow was melting, the birds were returning, and the football players were getting sloppy drunk and breaking shit:

According to University of Iowa Department of Public Safety Associate Director Bill Searls and criminal complaints, Zachary Merlin Derby, 19, and Tyler Allen Christiansen, 19, both of Hillcrest Residence Hall, approached an off-duty UI police officer and attempted to pick a fight with him. The incident happened about 2 a.m. in the Old Capitol Parking Ramp.[...]After being read his Miranda rights, police said Christensen admitted breaking off the arm of a parking ramp gate at the parking ramp.Searls said while officers were speaking with Derby and Christensen, James Ferentz, 19, also of Hillcrest Residence Hall, came out of the parking lot and was "yelling and screaming," though not necessarily at anyone. According to police reports, Ferentz had watery eyes and smelled of alcohol. Police said Ferentz had a blood-alcohol level of .160.

Police said Derby had a blood-alcohol level between .207 and .211 percent.

That's wet-the-bed drunk, and the accompanying destruction -- a parking gate and, if they had their way, a cop -- was as unnecessary and scattershot as can be expected under those trying circumstances.  To take such action was ballsy; to do so in the Old Capitol ramp at 2 a.m., in the view of the highest concentration of cops per square foot of any area in the state, was the drunken rampaging equivalent of a Les Miles fourth quarter playcall.  Huzzah to you all, gentlemen, though the fact that the only one of these guys who will ever play was merely "yelling and screaming" at no one in particular is slightly disappointing.  C'mon, Ferentz, you couldn't kick out the headlight on a Prius or something?

Also, we found out Zach Derby's middle name is Merlin, which is sweet.