Share All sharing options for: Terrelle Pryor Gets Called for Jury Duty 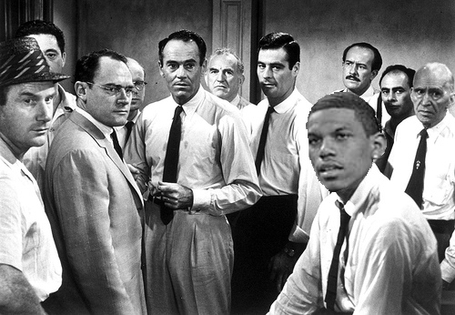 I want to thank you again for your service.  I know that jury duty is occasionally inconvenient, but your participation is crucial to our judicial system.  You have heard the prosecution.  You have heard the defense.  First degree murder is the charge.  Justice is now in your hands.  Bailiff!

Please escort the jury to the anteroom for deliberations.

-- The jury is escorted to an adjacent room, where they select a foreman.  The foreman then proposes a vote. --

We have tallied the votes

Let's not be so quick to jump to conclusions.

Well, the standard of proof is beyond a reasonable doubt.  Are you certain that standard has been met?

YOU TELL THEM JANE FONDA

HANOI JANE AND TP IN THE HIZZY!

Right, reasonable doubt.  Well, for instance, what about the blood at the crime scene?  It didn't match the victim or the defendant.

And then there was the murder weapon, a knife registered to the victim's former lover...

Yes, that struck me as strange.

And the eyewitness, who could not identify the defendant...

Yes, that is certainly a lingering doubt.

I'm just saying, when you add up the

LET ME TAKE IT FROM HERE EASY RIDER

That was Peter Fonda.

WHAT CRAZY LARRY IS TRYING TO SAY IS, NOT EVERYONE IS A PERFECT PERSON IN THE WORLD.  EVERYONE KILLS PEOPLE, MURDER PEOPLE, STEALS FROM YOU, STEALS FROM ME, WHATEVER.

--After 15 minutes of intense deliberation, the jury reconvenes in the courtroom.--

Have you reached a verdict, gentlemen?

On the count of first degree murder by carving the word "TREMENDOUS" into the victim's heart, we the jury, find the defendant...

WHAT?! You've got to be kidding me! We found him with the bloody knife! He clearly killed Banker Ted Dibiase!

LIKE I SAID IN THAT CAR THAT DONT MOVE

This man just committed a grisly murder, and now Mr. DiBiase can no longer LHAO about having money!

Sorry, Sexy Cop, but that doesn't mean "guilty" to us.

NOT GUILTY YALL GOT TO FEEL ME