Share All sharing options for: Wha Happened? Week One 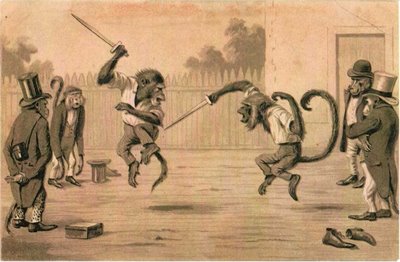 Despite what you may have been led to believe, there actually were other games going on outside of the near-apocalypse in Iowa City yesterday, so let's get started: Hey wha happened?  If you're looking for the capsule version: Big Ten, still not good.  Longer version?  Well... 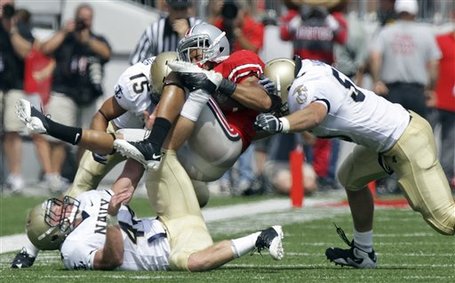 Well, that was a good way to get prepared for USC, right?  Ohio State took a 20-7 lead into halftime and seemed well on their way to salting away a comfortable win, but then the offense took a siesta and the defense decided to give up a handful of big plays to keep Navy in the game.  (How shoddy was the Ohio State defense in the second half?  Put it this way: they gave up an 85-yard TD pass to Navy.)  The mighty Midshipmen even had a chance to tie the game at 29-all with a little over two minutes to go, only to have the two-point attempt get intercepted and returned for a score (the rarely seen "pick-two").  Even the usual claim that Navy's unconventional offense is so difficult to prepare for holds a little less water this week; as a Week One opponent, OSU has had months to prep for these guys.  So USC and their gargantuan (and heavily-experienced) offensive line and their stable of uber-talented running backs head to the 'shoe next week.  I'm sure that will go well.  Offensively, Pryor had fairly respectable if pedestrian numbers (14/21, 174 yards, 1 TD, 1 INT, 6 carries, 30 yards, 1 TD), while neither "Boom" Herron or Brandon Saine emerged as complete replacements for Chris Wells. 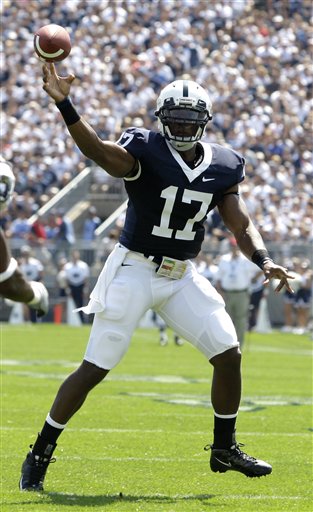 The Big Ten's other alpha dog, on the other hand, took care of business in the solid, workman-like manner of your protoyptical good Big Ten team.  They outgained the Zips by almost three hundred yards in the first half, zoomed to a 31-0 halftime lead, and simply coasted from there; presumably they spent the second half laughing at the pratfalls of two of their biggest nominal rivals in the league, Iowa and Ohio State.  Offensively, the clear story was the passing game; remember the meme about Daryl Clark having no one to throw to this year with his top three targets from a year ago departed?  Not a problem, evidently: he just went 29/40 for 353 yards and three TDs (as well as 1 INT).  If there was a chink in the PSU armor, it may have been in the running game: they carried the ball 30 times for just 136 yards, with Evan Royster carrying 14 times for 61 yards and Stephon Green carrying 7 times for 10 yards.  Something to work on as they make their way through their laughable non-conference schedule. 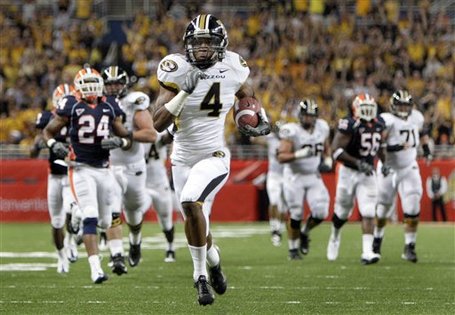 In what has become a depressingly annual tradition for Illinois, they opened the season by watching Missouri gallop up and down the field on them.  This year may have been even more demoralizing than the last two; there was no posse of future NFL draft picks or future all-conference honorees on the Missouri sideline this year (they're not there yet anyway) and the experience edge was supposed to tilt clearly in the Zooker's favor this year.  He was the one with the four-year starter at QB and the experienced and dangerous weapons in the passing game.  Rejus Benn went down with an ankle injury in the first series of the game, sending the offense into chaos while Juice proved that he is, in fact, still Juice: 18/28, 179 yards, 0 TDs, 1 INT, 13 carries, 27 yards.  As miserable as the offense was, though, the defense may have been worse; despite having heavily-touted players like Martez Wilson and Josh Brent healthy and on the field, the defense still resembled little more than turnstiles for Missouri's offense.  Blaine Gabbert did his best Chase Daniel impression and shredded the Illini secondary.  Illinois was a chic dark horse pick to contend in the Big Ten, but they still look far more like the team that was far less than the sum of its parts as it shuffled to 5-7 last year than the team that overachieved and made the Rose Bowl the year before that. 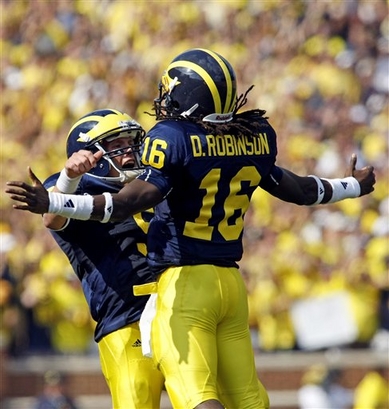 Distractions?  What distractions?  Year Two of the RichRod Era got off to a much better start than Year One, thanks in no small part to the massive improvement in play from the QB position: Tate Forcier went 13/20 for 179 yards and 3 TDs (and zero interceptions) through the air, while Denard Robinson ran the ball eleven times for 74 yards and 1 spellbinding touchdown.  Combined, they constituted a reasonable facsimile of a poor man's Pat White, although the trick will be getting one or both to be good at both running and passing: Michigan ran almost exclusively when Robinson was in at QB and while they were more balanced with Forcier, he wasn't remotely as effective as a runner (11 carries for 37 yards).  They don't get to play MAC-caliber defenses every week, after all.  Speaking of defense, the much-maligned Greg Robinson led the Wolverine defense to a shutout performance in the first half yesterday over what is touted as one of the most high-powered attacks in the MAC (Iowa fans should be all-too-familiar with QB Tim Hiller). 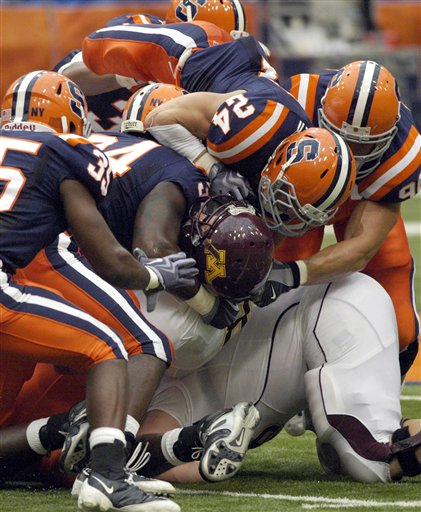 Those fucking domed stadiums.  The last time our favorite rodent-named team played in one, well, this happened.  And now they head up to the Carrier Dome and come perilously close to getting beat by a team quarterbacked by a guy who had spent the last four years playing point guard.  Clearly, Brewster and Co. long for the WIN FIGHT TRY SUCCEED!!! atmosphere that can only be found in the outdoors.  It all started out swimmingly for the Gophers; they jumped out to a 14-3 lead in the first three minutes of the game.  Then they failed to find the endzone for, oh, the rest of the game against the suddenly stout Syracuse defense.  The transition to the new offensive system looked like a struggle; QB Adam Weber went just 19/42 for 248 yards, a touchdown, and an interception, and they ran for only 112 yards on 32 carries.  And for all their chatter about getting tougher and stronger in the trenches, they seemed to be consistently getting stuffed in short yardage situations whenever I flipped over to the game.  The main bright spot of the day?  Eric Decker was a monster, getting nine catches for 183 yards.  The Gophers' next two opponents (Air Force and California) won their first games by a combined score of 124-13.  Have fun breaking in that new stadium, Minnesota. 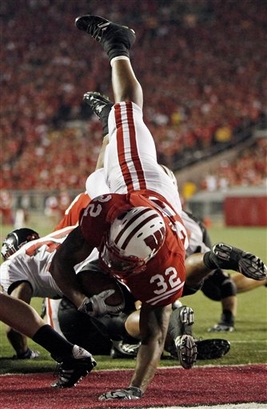 It started off all wine and roses beer and cheese curds for the Badgers with an 80-yard touchdown pass on Wisconsin's first offensive play of the game and it seemed like they would coast to a win, especially after taking a 28-6 lead after three quarters.  Instead, Northern Illinois rattled off fourteen points, recovered an onside kick, and was driving for the potential game-tying score when the Wisco defense managed to stuff them on fourth-and-3 from the Wisconsin 36.  Quite an achievement for a team whose quarterback (Chandler Harnish) sounds like he should be sipping brandy while wearing a monocle and an ascot rather than playing football.  Offensively, it was a good news/bad news day for Wisco: Scott Tolzien went 15/20 for 257 yards and a touchdown (to go with a pair of interceptions), but the running game was stuck in neutral for most of the day as Zach Brown carried 14 times for 51 yards and John Clay carried 14 times for 43 yards (and two touchdowns).  Either Northern Illinois has an unexpectedly great run defense or Wisconsin's bread-and-butter offensive attack has some major flaws. 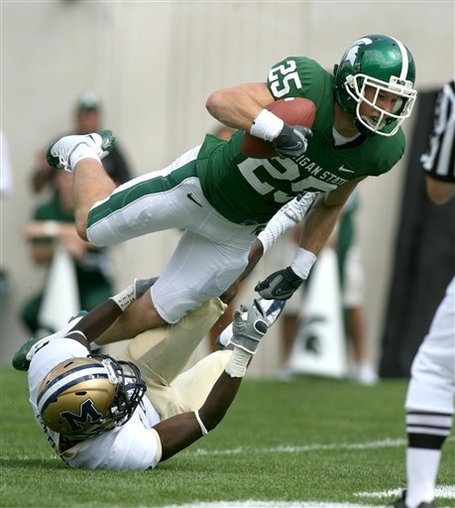 Nothing too exciting here.  Big Ten teams played lesser competition; Big Ten teams steamrolled lesser competition.  Rinse, repeat.  Sparty racked up almost 500 yards of offense and a 34-0 lead before allowing Montana State to get on the board.  The QB derby between Kirk Cousins and Keith Nichol looked pretty even: Cousins went 10/17 for 183 yards and three touchdowns; Nichol went 9/18 for 135 yards and a pair of touchdowns.  Likewise, no one emerged as a replacement for Javon Ringer, as seven running backs combined to carry the ball 36 times for 167 yards.  Northwestern had just as much success in blasting Towson: 485 yards of total offense, 30-0 lead before allowing Towson to score, 37-7 halftime lead, etc.  As expected, existentialist-cum-quarterback Mike Kafka slid into CJ Bacher's role at QB and had a respectable outing, going 15/20 for 192 yards.  A fleet of running backs combined to run for over 200 yards and five touchdowns.  Ho-hum.  Purdue was perhaps the biggest surprise of the blowout bunch; they racked up 52 points and over 500 yards of offense, led by out-of-nowhere RB Ralph Bolden, who blew up for 234 yards and two touchdowns on 21 carries.  On the downside, Joey Elliot threw three interceptions and the defense gave up almost 500 yards of offense (including 423 through the air); things probably won't go so well for the Boilermakers when they don't have a MAC defense to carve up.

Iowa State 34, North Dakota State 17
Most teams play Thursday night games to get on TV and get a little more exposure; Iowa State plays Thursday night games to allow their fanbase to head out early for a Labor Day weekend full of barn parties. Those inclined to use past performance as a predictor for future results might look at the fact that NDSU gained 200+ yards rushing and think that Iowa might be able to pound the ball (at least until they remember how anemic the Iowa running game looked yesterday).  Or look at how fat and slow the ISU offensive line appeared and dream of the Iowa defensive line wreaking havoc on them.  Then again, anyone who's actually watched an Iowa-Iowa State game in the last however many years knows how utterly meaningless the games played prior to it are in terms of figuring out how the game itself will unfold.  Will Iowa State come out fired up and looking for blood?  Will Iowa come out tighter than a drum?  You know the answers to these questions.  So who the fuck cares what they did against North Dakota State; they could have rolled around in pig shit for sixty minutes and it would have just as much bearing on the Iowa game. 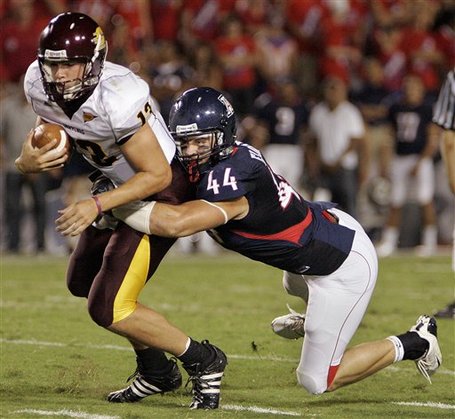 Arizona 19, Central Michigan 6
A lot of yards (448) and time of possession (37:45) for Arizona, but not a lot of points.  They didn't have much difficulty moving the ball, but they did have trouble getting points.  Matt Scott started at QB, replacing four-year starter Willie Tuitama, and put in a respectable effort: 19/30 for 202 yards (and one interception).  Mostly Arizona crushed the Chippewas' spirit with the running game: 46 carries for 246 yards and the lone Arizona touchdown of the game.  Defensively, Arizona throttled the Chippewa attack, holding them to just 182 yards of offense and eleven first downs and forcing two turnovers.  Suffice to say the Iowa offense is going to need to get a whole lot sharper in the next two weeks.
Arkansas State 61, Mississippi Valley State 0
Ground and pound: Ark State ran the ball 53 times for 358 yards and eight touchdowns, while holding MVS to a grand total of 69 yards, including 28 carries for 30 yards.  Then again, Mississippi Valley State is from the SWAC, so we should probably take these stats with a grain or two of salt.

(All photos courtesy of the AP, aside from the monkey knife fight one, of course.)