It's Not Plagiarism If You Link To It Translates Binary Code

Share All sharing options for: It's Not Plagiarism If You Link To It Translates Binary Code 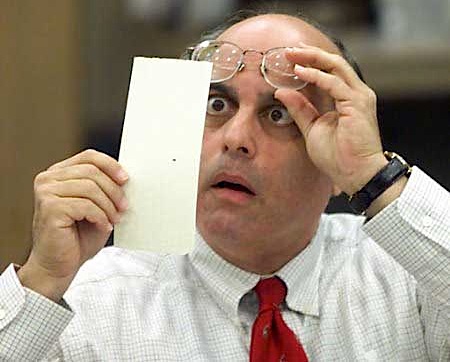 Mainstream media and coaches and old retired dudes suck and stuff.  Looks like we're not the only ones angry about this week's polls.  Doc Saturday takes the pollsters to task for the absurd contradictions in all three polls (we didn't even look at the Harris poll, assuming tapioca and shuffleboard would be #1-#2 for the 87th consecutive week).  Up for particular scrutiny is the inexplicable love for LSU:

The Tigers are not only playing mediocre football right now, going to the wire to beat Washington and Mississippi State on either end of ho-hum wins over Vanderbilt and Louisiana-Lafayette, but they don't even have that much inertia in their favor: This was an 8-5 team that had to stage a frantic comeback against Troy to fend off a full-fledged, four-game November slide last year, had a losing conference record and didn't even make it into the final top 25. This year, the Tiger offense currently ranks 105th nationally and needed an interception return, a punt return and a goal line stand to get out of Starkville unscathed.

The fact that 2-2 Kansas State, which is a 3-point underdog to Iowa Fucking State this weekend, received two votes in the Harris poll, should be enough to relegate this to the dustbin of history.  Of course, that won't happen.

So what I am supposed to gather from all of this is that Ole Miss is overrated whereas Penn State beat themselves.  Iowa is the real deal whereas South Carolina, well, isn't.  Frankly, if I were a South Carolina fan, I would be just as irked by all of this.  Iowa gets praised for defeating a top-five team whereas South Carolina gets an "oh well, yeah, good show, but really you didn't win that as much as your opponent lost it; sorry South Carolina."   Granted, I think Iowa likely wins against South Carolina in a head-to-head, but not by very much at all.

It almost seems to me as if everybody was a crouching tiger, waiting to strike the Rebels as soon as they lost, where- and whenever that was going to be.  I certainly expected the "ha LOL @ Ole Pi$$" message board backlash, namely because dipshits who post on internet message boards are incredibly predictable, and I cannot say I didn't expect some sort of flame from the mainstream media--but I certainly didn't expect it to this extent.

As with all conspiracy theories, this is mostly crap.  There is a certain perception that comes along with long-inept programs like Ole Miss and South Carolina, to be sure, but it's more than balanced by the fact that both of those teams come from the mighty SEC, constantly pimped by the two major mouthpieces of the college football mainstream media as forever superior to those of us from the upper midwest.  Iowa's ranked higher than South Carolina because its preseason expectations were higher and its resume is better (for instance, unlike USC, Iowa hasn't yet lost a game), to say nothing of the residual effects of the curbstomping Iowa gave the 'Cocks in January.  As for Ole Miss vs. Penn State, well, that's probably because they're Penn State and you're Ole Miss.  You've got me there.

Cyborg football robots, on the other hand, are cool and stuff.  The human voters (other than Doug Lesmerises, who capably defended resume ranking and made Craig James look stupid on College Gameday) are quite clearly morons.  The superfuturemachines, on the other hand, have it exactly right, as Iowa leads two of the four BCS computer polls:

Sagarin: Iowa, which barely beat Northern Iowa, but won at Penn State Saturday. Please note that Florida is atop both of the formulas that Jeff Sagarin prefers, but that Iowa is first (and Florida is seventh) in the formula that the BCS counts.

Hlas is right: It's September.  We all need to settle down just a bit.  The Sagarin ratings are interesting, though: Iowa takes fifth (first in the margin-of-victory-free ELO_CHESS ranking), but I have to take umbrage with any poll that would rank Boise State's schedule strength in the top 40.  Of note when reading the Sagarin ratings is the fact that preseason rankings are still factored in; those factors will be removed once the teams become "connected."  I have little idea of what Sagarin's talking about.  He's much smarter than me.

Fun with depth charts.  The two-deeps for Arkansas State are out.  The injury situation remains unresolved: Bryan Bulaga and Tony Moeaki, who sat out the PSU game, remain conspicuous by their absence.  Derrell Johnson-Koulianos, who was the one game-time decision to get some playing time in Happy Valley, is listed as a backup at wideout behind...Colin Sandeman?  Yes, the junior receiver may have missed the lion's share of fall camp, but back-to-back workmanlike performances against Arizona and Penn State have moved him to the top of the depth chart.

Clayborn also gets the Heisman Trophy, Pulitzer Prize, and Emmy for "Best Performance in a Reality Show."  Two Hawkeyes picked up Big Ten Player of the Week honors following the Penn State game.  Adrian Clayborn was a no-brainer for special teams player of the week, as his fourth-quarter punt block and return put the Hawkeyes on top, drew the praise of his teammates and coaches, and gave him the national lead in punt return average.  Pat Angerer's 14 tackles, interception, and forced fumble were more than enough to garner defensive player of the week.

Caring is creepy.  While knee-deep in the hoopla of last week's game, we neglected the most recent Iowa commit, Miami halfback De'Andre "The Apostrophe" Johnson.  De'Andre receives three stars from Rivals, two stars from Scout, and offers from programs like Minnesota, Duke, and a bunch of the Sun Belt teams (he did have interest from Florida and LSU).  Johnson's commitment was initially announced following the Arizona game, though he sounded less-than-enthused with his decision and still planned on taking a visit to Minnesota.  After the Penn State game, though, he confirmed he is "120 percent committed" to playing for Iowa, which is impossible but whatever.  Johnson is already 5'8", 210 pounds, effectively making him a Jewel Hampton clone from day one.