What do you want? I'm on the phone like always.

WHERE IS THE NEWSPAPER, I HAVE TO DO READING

Can't you just go online? All the newspapers' stories are online anymore.

JESUS PIPE-SMOKING CHRIST, DON'T YOU EVER SNEAK UP ON ME LIKE THAT AGAIN, JUNIOR

You told me to sit here five minutes ago, and then when I asked you why, you just wandered off.

DID YOU BRING ME A NEWSPAPER

Well, I didn't really bring it for you, per se, I kinda wanted to read

What's with your obsession with newspapers, anyway?

I GET THE PAPER. I GO TO THE BATHROOM. I TAKE THE PAPER IN THERE AND I SCAN IT. I LOOK AT IT. THE FIRST THING I DO IS LOOK AT WHO DIED. ALL RIGHT

What? You go to the bathroom to look at obituaries? That's like the grossest thing I've ever heard of!

THE GROSSEST THING YOU'VE EVER HEARD OF IS IF I WENT TO THE BATHROOM, THEN DIAGRAMMED PLAYS ON THE WALL BY SMEARING MY OWN DEFECATE

NO, BUT I HAVE USED MY OWN EJACULATE 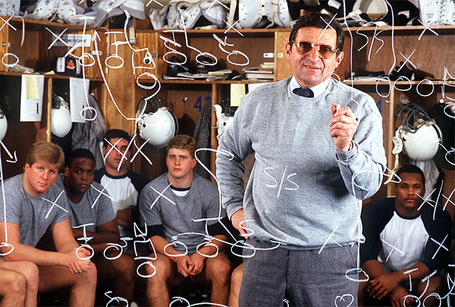 THOSE PLAYS COULD HAVE BEEN YOUR BROTHERS, JUNIOR

Why am I even here, anyway?

I'M TOLD WE ARE MISSING LINEBACKERS

How do you not know about that, Dad?

WHAT DO YOU MEAN

According to this police report, you tried to shoot his genitals off with a blunderbuss for overpursuing on a draw play.

And then there's Sean Lee.

HE STILL LOVES THE PROSTITUTES LIKE YOU WOULD NOT BELIEVE

Right, it's his other knee, not the one that Secretary kicked out. As for that, we're calling it a "sprain" so the authorities don't come sniffing around here, but that aside, could you please remind me again why we do that one drill?

AH YES, THE "BEAT THE STARTERS' LEGS WITH BASEBALL BATS UNTIL THEY CRY FOR MERCY" DRILL

THAT'S A HOLD OVER FROM MY DAYS AT OKLAHOMA STATE

Wait, you were nev

WE TRAINED OUR BOYS WITH THAT FOR HOURS ON END, BATTERING EACH OTHER'S LEGS TO BLOODY PULPS, FORGING OUR FIBULAE AND TIBIAE INTO BATTLE-HARDENED WAR MACHINES, ALL TO STAVE OFF THE LOOMING NAZI THREAT

This doesn't even sound like something he saw on television and thinks happened to him, I think he's actually hallucinating.

Okay. And then what happened, Dad?

MY GOD, THE WOLVES

STUPAR? I BARELY KNOW HER

BUT I WAS NOT JOKING, WHO IN THE HELL IS STUPAR

Nathan Stupar is our top backup. He might not play either.

THIS IS CLEARLY THE WORK OF THOSE GREASY KRAUTS.

THESE BOWELS ARE NOT GOING TO EVACUATE THEMSELVES