It's Not Plagiarism If You Link To It Knows The Truth

Share All sharing options for: It's Not Plagiarism If You Link To It Knows The Truth

Au Contraire, MR. PATERNO.  According to the Altoona Mirror, JoePa is trying to downplay the revenge factor in Saturday's game.

"I don't know what revenge has got to do with it in football," he said. "It's not like they sneaked up on us and stuck us in the back with a knife or something. They played a good football game, and they beat us."

Lies!  BHGP has uncovered the truth: 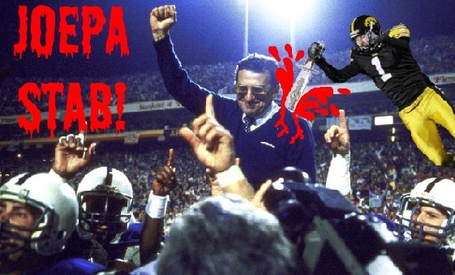 Credit to Hayden Fry's Mustache Ride for his hard-hitting efforts to uncover that photo.

We got your whiteout right here.  Iowa assistant basketball coach Joel Cornette unveiled the new third jersey for the Iowa basketball team via Twitter.  As an avowed hater of yellow jerseys, I approve of the new look. 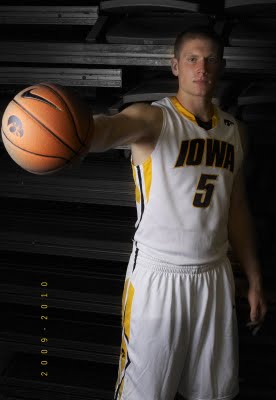 The game is when?  Shiiit.  Per Ferentz's radio show last night, Bryan Bulaga is out for Saturday's game, but DJK and Moeaki "have a chance."  Speaking of which... caring may be creepy, but Facebook-stalking is A-OK.

"The only thing on my mind is who gone run that town saturday night? WE ARE, YA I SAID IT, WE ARE! HAWKNATION STAND UP!!!"

So if we are to believe that DJK's Facebook status is a credible source, then it sounds like he's either in top cheerleading form or ready for action on Saturday.  Much as his cheerleading efforts might be appreciated, let's hope it's the latter case and he's out there abusing the PSU secondary.

Profilin'.  ESPN's Adam Rittenberg points out that Stanzi has developed a trend of slow starts.  You don't say.  Meanwhile, the Press-Citizen checks in with a nice profile on Ryan Donahue, who's arguably been Iowa's most consistently strong performer this year.

"It obviously depends on where we are on the field," Donahue said. "If we're backed up, I'm going to try and change our field position. If it's a pooch punt, I'm going to kick it as high as I can, and hopefully our coverage team can get down there."

So, yeah, Zoltan Mesko can suck it.

I'm unaware of anything that happened in that game after halftime and before overtime, but the parts of the game I do remember were awesome.