Share All sharing options for: It's Not Plagiarism If You Link To It Is Ready for Primetime

Whiteout?  That's OK... all the white will just hide their tears; in totally related news, just five days until this: 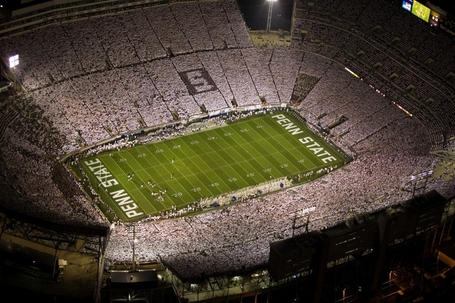 That doesn't look so intimidating, eh?  Just 100,000 ghosts Klan members Penn State fans, under the lights, on ABC (7pm CST, in case you've been living under a rock), with a full day's worth of tailgating fueling their rage (well, that and the 323 days they've had to think about this) ... no big deal.  I mean, the last time Iowa played a game after nightfall, this happened ... and of course there's no difference whatsoever in the circumstances of those two games.  55-0 here we come!

Unlike Poor Guy, At Least Tony Still Has His Foot.  Monday came and went and brought to light this week's depth chart, which is every bit as insightful as the usual Ferentz depth chart.  The major news is that there's still no sign of Bulaga, DJK, or the Flyin' Hawaiian (Tongan?) in the depth chart.  Considering this depth chart comes less than 48 hours since that trio was declared unable to play in the Arizona game, it's perhaps not surprising that there has been no miraculous improvement in their conditions.  There's obviously still plenty of time for them to improve before gametime.  In their absence, Riley Reiff, Colin Sandeman, and Allen Reisner are the named starters on the depth chart; all three filled in admirably last Saturday, but a night game in Happy Valley against a pissed-off top ten team is an entirely different challenge.  We'd particularly like to see Bulaga and DJK make it back for this game; DJK had the best game of his career (to that point) against Penn State last year and no offense to the Naked Panchero's Bandit, but we'd much rather have Bulaga defending Stanzi's blindside.  In other depth chart news:

And then JoePa called the apothecary.  You mean Iowa's not the only team dealing with injuries to key personnel?  Per ESPN, LB Sean Lee is day-to-day with a sprained left knee and LB Navarro Bowman is still questionable after missing the past two games with a groin injury (although our friends at BSD think he'll play).  Losing both guys would be a definite blow to PSU's front seven.  But given what happened last year and that both men are seniors, we expect to see both guys out there even if they have to attach their legs with duct tape.  Wide receiver Graham Zug is also questionable after being concussed in the game against Temple, although we all know that's total bullshit and he's just petrified of being on the same field as the Adrian Clayborn Pain Train.

He may be a ginger and an Irishman, but he's got a fucking Howitzer for a leg.   Ryan Donahue was named Co-Big Ten Special Teams Player of the Week, which makes three weeks in a row in which an Iowa player has been awarded a Player of the Week award by the Big Ten (Jeremiha Hunter also won the Special Teams Player of the Week award after his game-saving field goal block in Week 1, while Tyler Sash was recognized as Co-Big Ten Defensive Player of the Week for his three-interception effort against Iowa State in Week 2.)  On Saturday, Donahue had four punts over fifty yards (including one 62-yard moonshot), two were downed inside the Arizona 20, and only one was returned (for a measly four yards).  He's, um, good.  Really, really fucking good.  (For the record, Donahue shared the honor with Wisconsin's Chris Borland, who blocked one punt and forced a fumble on another punt in the Badgers' game against Wofford.)

What the fucking fuck?  Yes, bowl projections at this stage of the game are pretty much inherently retarded and barely worth paying attention to... but they should still make a little bit of sense, right?  Try telling that to Bruce Feldman, ESPN Insider blogger cuntbag extraordinaire.  For the second week in a row, he has Iowa MIA from his bowl projections on ESPN. This despite picking eight Big Ten teams to go bowling, including 2-1 justNorthwestern (who just lost to Syracuse) and Minnesota (who has looked fairly middling in all of their games thus far) and 1-2 Michigan State and 1-1 Illinois, two teams whose only wins have come against I-AA opposition.  Other college football luminaries picked to go bowling by Feldman?  Florida International, Arkansas State, and SMU.  Feldman can go get fucked by a roomful of syphilitic cocks.  (For the record, Feldman's cohort in bowl-based prognostication, noted SEC homer Mark Schlabach, picked Iowa to play Georgia in the BHGP-approved Outback Bowl.)

Poll watchin': like bird-watching, only with less chance of contracting avian flu.  Like early season bowl prognostication, early season polling is pretty much intrinsically idiotic, but every year we get sucked into caring about it anyway.  This week, despite being ranked 19th in the only poll we officially give a shit about, Iowa is ranked 31st in the AP poll and 30th in the Coaches poll, up slightly from last week.