Sure, Iowa just beat up on Arizona, 27-17. But how much do we really know? What was really important about beating Arizona? What does it all mean, Basil? The Takeaway has the answer.

Okay, time for the real Iowa to face a real quarterback: As we mentioned Saturday, Iowa's defense has absolutely obliterated the last two starting quarterbacks it faced; Austen Arnaud and Matt Scott, in their two appearances against Iowa, combined for 14-36, 129 yards, 0 TDs, 5 INT, and 2 benchings. That's goddamn brutal. Scott, especially, suffered Iowa's wrath; he was 4-8 for 50 yards. Then the second half started, and he completed precisely 1 pass: a perfectly thrown can of corn to Tyler Sash, who announcers said "almost called for a fair catch" on the play. Lucky for Iowa, he didn't; Sash ended up returning the pass 43 yards, and Iowa would soon thereafter kick a field goal that put the game out of reach for Arizona.

But the one nagging issue is that Matt Scott sucks, and Arnaud's credentials are little better. Pat Grace--the one good QB Iowa has faced--antagonized Greg Castillo for a whole game, but Castillo was never supposed to be starting; that's basically Shaun Prater's job, and Prater looked pretty damned good in his first game back. Darryl Clark, meanwhile, is generally accepted as one of the two best QBs in the conference, depending on your opinion of Terrelle Pryor and--if you're clinically insane--Juice Williams. 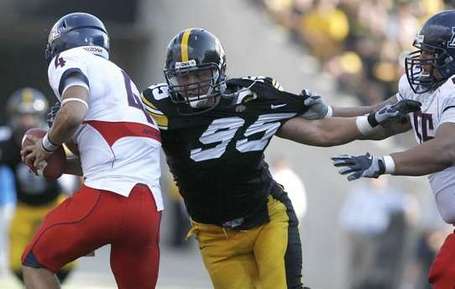 No holding was called on this play. Not that Karl Klug cares, of course; not here, not ever.

It'll be good. No, really, it will be. Nobody thinks Iowa's going to hold Clark to the median of the last two starters' performances (7-18, 64 yards, and a statistically curious 2.5 INT), but what he can accomplish with a meh receiving corps against a legitimate pass defense does remain to be seen. We're still looking quizzically at the linebackers and their pass coverage, but does anybody really think Clark's going to victimize anybody in the Iowa secondary? Prater, maybe. Greenwood, maybe (By the way, CLICK HERE for awesome footage of the Iowa secondary in action). The real hay's going to be made over the middle for PSU, though, not over the top or outside the hashes, and it's going to be interesting to see if the Nits have the patience to stick with that. Arnaud didn't, and hell followed.

Speaking of which, holy crap Tyler Sash: Obviously, this trend of Tyler Sash and his separations of offense and possession cannot keep its pace. Sash, who we might remind you is just a sophomore, picked off his fourth pass on Saturday, and it might have been his easiest takeaway of his Iowa career. That makes 7 interceptions in his last 5 games, and it says nothing of Sash's missile-like pursuit to the sidelines.

This dominance has its costs, though, and the primary unbeneficiary of them is David Cato. Cato made his presence known by knocking Grigsby for a big loss after the Cats got to Iowa's 1. Ah, but the third down that failed on that play? Effected by Sash pressuring Scott into an impossible pass after Scott rolled out. So you see the problem here. 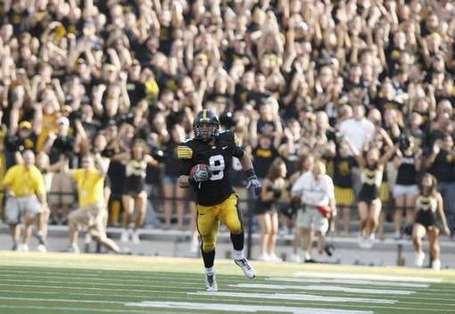 Making things tougher is the fact that both players are sophomores; Cato burned his redshirt out of necessity last season. But Cato is necessarily a strong safety. It seems like Ferentz is trying to get him on the field more often, usually on special teams, but someone's going to have to switch positions to get both guys playing. That someone isn't going to be Sash, who's probably the best strong safety Iowa's had since Bob Sanders (yeah, I said it). Fortunately, Cato's frame looks like it might be big enough for a move to LB; we'll see what the team decides after the season. It's a shame, because Cato looks legit in his own right; that legitimacy may necessitate a transfer for his own sake, though, and that would suck.

But we digress. If Sash keeps up this kind of production, he's going to go down as one of the best safeties in Iowa history. We're three games into his sophomore season, so it's obviously not quite the time to start deciding his place in the list of the greats; that pace has to actually, y'know, keep up first. But man, he's good.

The Paul Chaney Jr. end around: We think the novelty's worn off, guys. Yes, the defenses need to respect Chaney or he'll bust one, but... they've tried it, what, four times now? Five? And he hasn't come close to taking one to the house. Unless this is some first step in a grand scheme to pull off an epic quadruple reverse, Iowa has probably shot its "end around" load. 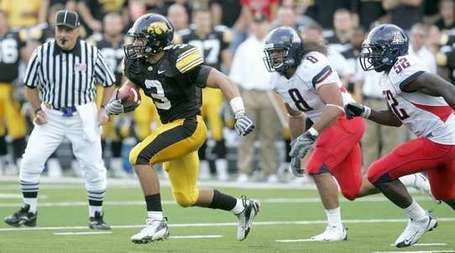 Two tailbacks? And neither of them are Jeff Brinson or Jewel Hampton? Um, we did not expect this: First of all, everybody who thought three months ago that Adam Robinson would rush for a C-note on Arizona, please raise your hand. Okay, thank you, Robinson family and Lincoln alumni; the rest of you are fucking liars.

On one hand, Robinson registered 101 yards on the ground and you cannot take that away from him. That said... 43 of those yards came on a busted draw on 3rd and 23, a play where the Arizona DBs would have faced sodomy from a Mag-Lite if they'd bit on any sort of play fake. That's important because the prevailing narrative about Iowa's uncaring treatment of Nic Grigsby included a caveat about 58 of Grigsby's 75 yards coming on one carry, and we cannot have it both ways. Yes, A-Rob was better per carry even with the big run taken away, but if we say Arizona's run game was taken away, we have to admit Iowa's fared little better on median; excepting the big run, between A-Rob and Brandon Wegher, Iowa rushed 34 times for 104 yards. That's about 3.1 yards a pop, and if Arizona can do that to Iowa, Penn State should expect something similar. That does not bode well.

All of this is to be expected, though. After all, we're talking about a backfield tandem of a redshirt freshman who was generally thought of as the 4th best returning tailback six months ago, and a true freshman from Sioux City. Yes, they've outproduced those bona fides thus far, but not by that much, and here comes a real Big Ten defense just wishing a motherfucker would try to go between the tackles on them.

So what to take away from the rushing game? Well, Robinson ran hard, Wegher did things nobody else on the team can do (A cannonball from the 4 on a goal line dive that scores with ease? Come. on.), and together, they're in for the fight of their young lives against a PSU defense that's going to be amped as fuck when Iowa comes to town. 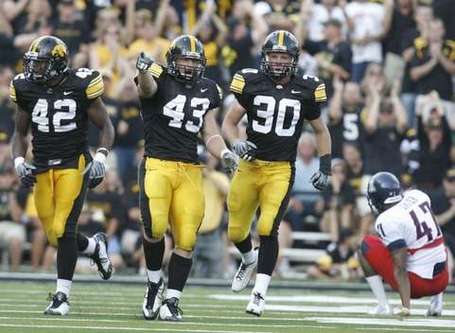 And finally, this team is pretty close to legit. We're not about to say Iowa was underrated when they were at #21/22 coming into the season. Based on the way the AP votes, that designation is just about all a random Team X could ask for after these first three games.

At the same time, Iowa's missed 6 of its top 7 players on offense for at least a full game this season. Don't believe us? Bryan Bulaga, DJK, Tony Moeaki, Kyle Calloway, Jewel Hampton, Julian Vandervelde. Of those six, only two are healthy now, and we're not sure how many more will be ready to rock by the time the Happy Valley date rolls around. Every one of those players Iowa gets back is one step closer to a win at Penn State. We don't think Iowa's got the victory in hand by any stretch, especially in its current form.

But Bulaga's better than Riley Reiff. Moeaki's better--especially for the run game--than Allen Reisner. DJK's better than Colin Sandeman. Even if improvements are incremental, they're still improvements, and Iowa could use all the help it can get towards getting closer to full strength for the PSU game.

And yet, Iowa's still already 3-0, and the defense is rounding into mid-season form already. Granted, this could still all end in a 40-point victory for the Nittany Lions, but we'll see how much good news Iowa gets in the lead-up to the game. Plus, if there's anything Ferentz has proven himself to be up for, it's BEATING PENN SCHTAAAATE.