So what else happened while you were watching Adrian Clayborn enter Beast Mode and Tyler Sash do his INT thing?  Patsies went down, Sparty got smited, and the LOLcats proved their LOLfulness. 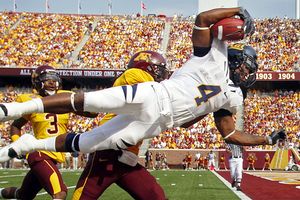 With Tim Tebow and Colt McCoy having middling games Saturday (and Sam Bradford continuing to sit out with a shoulder injury), Jahvid "the Jet" Best decided to use the ESPN showcase to emphatically state his case for the Heisman: 26 carries, 131 yards, 3 catches, 17 yards, FIVE TOUCHDOWNS.  Yeah, that's making a statement.  Kevin Riley was solid (16/25, 252 yards), but Saturday was The Jahvid Best Show and what a show it was.  As far as Minnesota goes... another dreadful uniform combination, another day getting gashed on the ground, and further proof that if something happens to Eric Decker, their offense is completely and utterly FUBAR.  Decker's day Saturday? 8 catches, 119 yds, 2 TDs... and he threw a TD pass, too.  He's good.  The rest of their offense is not. 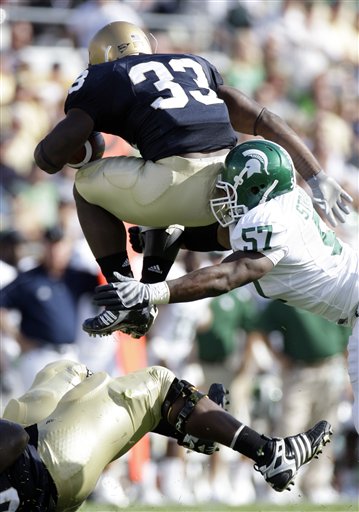 A week ago, Notre Dame was undone by the clutch play of an inexperienced QB; this week, they were saved by a very un-clutch dropped TD pass with seconds left and a bad INT thrown by an inexperienced QB.  Luck of the Irish indeed.  Much like last week, Sparty got carved up through the air (The Emu went 22/31 for 300 yds and 2 TDs), and even strong play (aside from that last ill-advised pass) from QB Kirk Cousins (23/35, 302 yds, and 1 TD) couldn't save the day.  For once the offense didn't look anemic, but those stats may deserve a caveat: the Notre Dame defense hasn't looked particularly stout against anyone besides Nevada, a middle-of-the-road WAC team.  More troubling is the weakness of the defense, which was supposed to be the backbone of this Sparty team.  Granted, Dan LeFevour and Jimmy Clausen may be the two best quarterbacks that Michigan State plays all season... but thus far their presumed strength is looking fairly unimpressive. 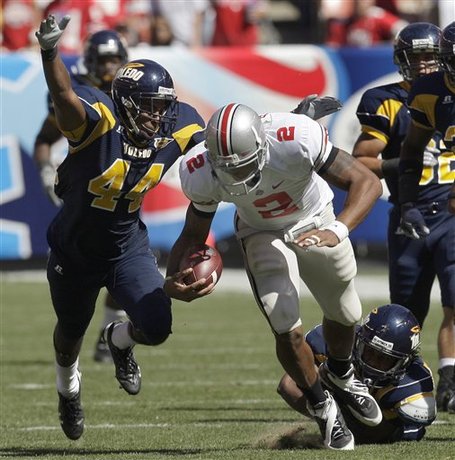 Upon discovering that Terrelle Pryor can, in fact, run the ball, Jim Tressel's brain leaked out his ears.

The jury's still out on Terrelle Pryor's credentials in big games, but he sure can whip the fuck out of lesser teams.  Pryor was the alpha (17/28, 262 yds, 3 TDs) and the omega (12 carries, 110 yds, 1 TD) of the Buckeye offense and for once looked like the budding superstar he's supposed to be. Of course, it was Toledo -- wake us when he does it against a contender.  The defense again proved to be the strongest part of the Ohio State team, utterly stifling a Toledo attack that had been among the nation's most potent heading into the game. 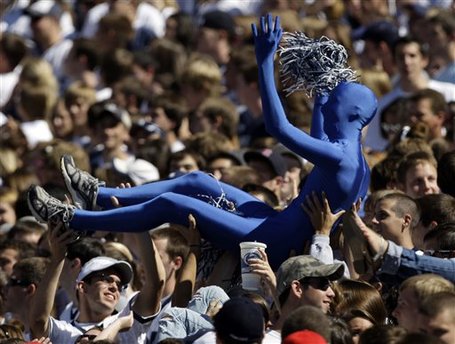 Pretty sure this was more exciting than anything in the game itself.

Another week, another ho-hum dominating performance by Penn State.  They ran their record against Temple to 35-3-1, controlled the line of scrimmage, and cruised to a comfortable win behind a workmanlike performance by Darryl Clark (16/26, 174 yds, 2 TDs, 1 INT) and a breakout performance by Evan Royster (19 carries, 134 yds, 1 TD).  To date, the Nittany Lions have yet to really be challenged at any point this season - but they haven't put up any gaudy, blowaway performances that makes us sit up and take notice of them, either.  Considering the lackluster opposition they've faced thus far, that might qualify as a slight indictment of them.  But, really, we won't know what Penn State really has until they're tested by someone... which should hopefully happen next weekend. 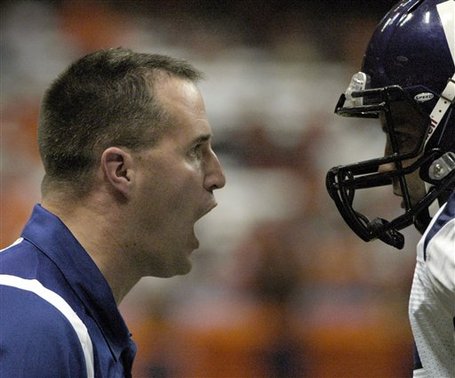 Bitchgerald doing what he does best: bitching.

It's right up there near the front of the Not a Good Idea File: don't spot the home team a 17-0 lead when going on the road, even if said home team is Syracuse.  As if there was any doubt after the LOLcats' narrow escape against Eastern Michigan a week ago, this loss should firmly remove them from the "Contender" column and place them squarely in the "Pretender" column.  The LOLcats wasted a massive game from Mike Kafka (35/42, 390 yds, 5 total TDs -- he threw three, ran for one, and caught one), although he did behave more like a cockroach than a man (don't hate; literary jokes are mandatory when writing about justNorthwestern this year) when he threw a key interception in the fourth quarter.  But the real goat for the LOLcats was the defense: 471 yards of total offense to Syracuse?  Letting Greg Paulus go 24/35 for 346 yards and 2 TDs?  Giving up 11 catches for 202 yards and 2 TDs to Mike Williams?  That's a heaping stack of FAIL right there, jNWU.  They might want to learn to cover this week, too: the Big Ten's best receiver (Eric Decker) is headed to town on Saturday. 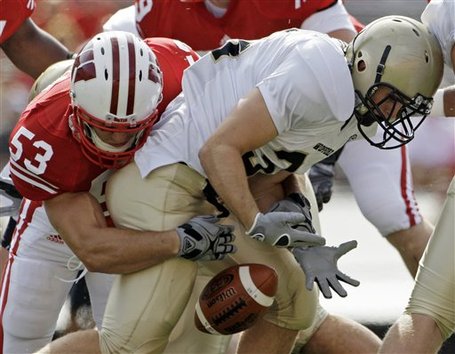 Bucky likes balls.  Not that there's anything wrong with that.

Wisconsin smashed a bad FCS team; Scott Tolzien (15/20, 159 yards, 2 TDs) continued his solid start to the season, and the Badgers' cro-mag offense did its thing beautifully: 42 carries, 258 yards, 3 TDs.  Not much else to say about it, really, although the three fumbles they lost are not exactly ideal.  Meanwhile, Purdue's blowout win over Toledo and close loss to Oregon may have been a mirage; upcoming weeks will tell the entire story, but this was an ugly, not-as-close-as-it-looked loss (Purdue was down 28-7 at one point, got outgained by over 100 total yards, and lost the time of possession battle badly -- 41:40 to 18:20).  Based on this result alone, Purdue confirmed all those preseason picks that had them slated to finish in the bottom of two of the Big Ten.  Michigan unsurprisingly suffered a slight case of letdown-itis against Eastern Michigan: the game was close for a half, Tate Forcier for once looked like a freshman (7/13, 68 yards, 6 carries, 5 yards, 0 TDs), and the Falcons bizarrely dominated time of possession (40:02 to 19:58), but Michigan still pulled away behind a monster running game: 39 carries, 380 yards, 6 TDs.  As for Indiana... for once they dominated a team this year, but we'll be impressed when they do it to someone besides Akron.

Arkansas State was inactive this week.  They probably spent the whole weekend being terrified of Adrian motherfucking Clayborn.

(All photos courtesy of the Associated Press, aside from the Jahvid Best photo, which is courtesy U.S. Presswire.)