Share All sharing options for: It's Not Plagiarism If You Link To It Is Taking It Easy on the Livestock Today

When it's news that you're not sexually abusing the livestock, that's probably a bad sign: When it comes to schools whose fanbases and students take liberties with farm animals, okay, your first instinct isn't always Michigan. Michigan probably isn't even in the top 10. The top 10, of course, is all Iowa State--except for #7, which is "Nebraska haha just kidding it's Iowa State." But lo and behold, there's Rittenberg claiming exactly that in the screencap I grabbed last night.

So you go to the article in question... and it has nothing to do with sheep wearing ball gags and gimp masks. What the hell, Worldwide Leader?

Ah; turns out it's Google Reader, automatically translating the word "Mouton" in the headline, since "mouton" is French for "sheep." Why does Google Reader do this? For bestiality jokes, that's why.

We probably could have used this before yesterday's podcast: Morehouse has a comprehensive breakdown of Arizona. It's full of facts and noted notables, which is probably his way of making us look bad. Petty, that man. Just petty. A quick rundown:

If you've been waiting for your JoePa fix, thank you for your patience: Our new feature, FauxPa's Fireside Chat, went up today at our bill-payin' gig at SbB. It's not quite the same as the Chronicles, which will still probably make an errant appearnace every now and then here, but it's still worth reading anyway.

Mike Leach wants you to spend your money wisely: And by that, he means burying a trunk of gold on an uninhabited island, yes?

The very definition of Football Affluenza: The Daily Trojan, complaining that their true freshman who just won in Columbus isn't good enough yet. Sir, please try slumming it with a significantly worse program for a while. If you need help finding one, please look at 95% OF THE REST OF I-A. Observe:

Come on: He completed 15 of 31 of his passes in the game — 48 percent, which would’ve been good for ninth in the Pac-10 last season — and some of the misses were glaring.

HOLY SHIT. MATT BARKLEY WON AT OSU IN HIS SECOND GAME OUT OF HIGH SCHOOL AND YOU'RE BITCHING. GET FUCKED BY A FIRE HYDRANT, YOU SPOILED BRAT.

Telling you all not to break the law would be foolish and naive, of course, because this is college and college is for drunken anarchy: The UI held their annual "here's how to avoid being arrested" event yesterday. While the DI did us the disservice of not publishing the really obvious tips ("Don't steal a cop car; not even as a joke!"), our general observations have been that you have to try to get arrested in Iowa City. Oh, you'll get a PAULA if you even say the word "alcohol" and you're under 40, but the handcuffs don't come out until you start losing your shit. 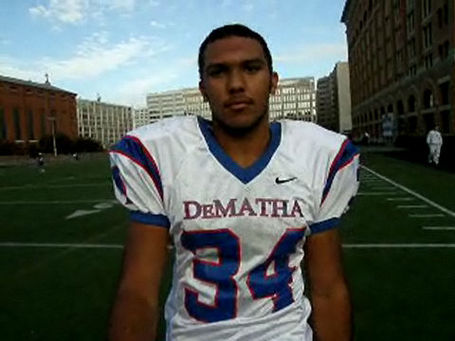 He plays on a field surrounded by buildings. I. Want. That.

And finally, this, and the rest of the album, is the shit.

There's A Game On Saturday rolls through tomorrow, people. Get some sleep.