Share All sharing options for: It's Not Plagiarism If You Link To It Is Living in the Past

EPIC COMCAST.  From the digital cable information on Saturday's game in Ames: 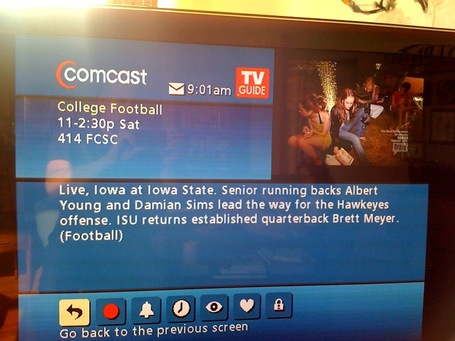 Young, Sims, and Meyer graduated two years ago.  So, yeah, you might want to update that.  (T/F/J: Stein)

Fun With Depth Charts.  The all-new Arizona two deep is out.  No huge surprises, but a few interesting developments:

"That's not just an alma mater. That's the root system of a California redwood."  The Arizona Daily Star (registration required, and it's probably worth it) gives the definitive summary of the Stoops brothers at Iowa and coaches who return to face their alma maters.  For the uninitiated:

Mike Stoops is returning to his home turf this week, Iowa's Kinnick Stadium, and at some point Saturday he will surely look across the field to check out jersey No. 41, worn for 11 consecutive years by him or his brothers.

Life goes on. Freshman safety Jacob Reisen now dons No. 41, a jersey worn consecutively from 1979 to '89 by Bob, Mike and Mark Stoops.

No. 41 is also worn for eternity by the Stoops' father, Ron, who was buried in the gold and black jersey at his 1988 funeral in Youngstown, Ohio. The family's ties to the Hawkeyes were so great that the esteemed Hayden Fry, coach of the Stoops brothers, was told that Ron Stoops was about to buried in a traditional coat and tie. With the help of Mike's mother, Dee, the former Iowa coach helped change Ron's coffin outfit, removing coat and tie, and replacing it with jersey No. 41.

Be true to your school, indeed.

If you wonder why some people insist Bob Stoops would consider returning to Iowa if Ferentz left, this is usually Exhibit A.  Of course, it was also Exhibit A in 1999, when Stoops shunned Iowa for Oklahoma.  Cue StoopsMyAss rant in three, two, one...