Share All sharing options for: The Takeaway: Iowa State

Sure, Iowa just rolled through Ames, 35-3. But how much do we really know? What was really important about beating Iowa State? What does it all mean, Basil? The Takeaway has the answer. 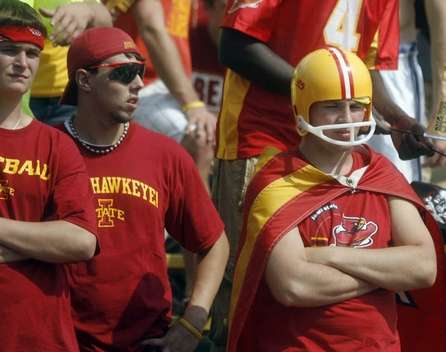 Like this fan, Austen Arnaud may need a hug: First of all, what do you tell Arnaud after that performance? He's a returning starter at quarterback, at home, leading his team against a wounded rival they routinely outplay. The end result? 10-22, 79 yards, 0 TD, 4 INT, 1 benching, and a quarterback rating of EYES SHOOTING BLOOD AND LAVA AND PISSED-OFF SUPERHORNETS*. Not even the most optimistic Hawkeye partisan could have seen that performance coming, but obviously, here we are.

As those of you with Cyclone partisans in your close circle probably already know, gloating in the aftermath of such an ass-kicking seemed somewhat hollow and mean-spirited. The best smack talk comes when your team beats someone who played well and still wasn't good enough (Penn State, remind us, how did that game go last November?). That clearly didn't happen this weekend.

All of this is not to say that we weren't ecstatic this weekend or won't be happily reminiscing about 35-3 for the next ~360 days or so. That beating was a long, long time coming. It made life taste better than it had in months. But when the poor ISU fans can only say "what the FUCK" over and over... well, there's no joy to be had in trying to pile onto that.

Not right away, anyway. 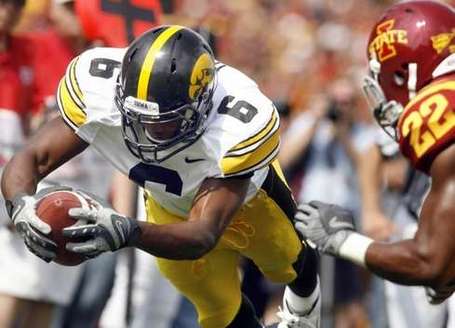 Gaze upon our strength and tremble!: On the offensive side of the ball, there were plenty of guys playing the first road game of their college careers... and yet not playing like it at all. We worried about Bryan Bulaga's absence; Riley Reiff was more than competent in relief. Brandon Wegher may have played his way into a starting role with over 100 yards on the ground, 1 score, and a positively sick 1-handed screen pass that he converted into a first down. If the Cyclone spirits weren't broken beyond repair before that play, they were afterwards. Wegher's dive into the end zone from a yard out later in the drive only sealed a fate long since determined. Keenan Davis already looks like a weapon at wideout, and even Brad Herman looked like a talent on the end.

UPDATE: Mr. storminspank was way ahead of us and posted the catch online, which we are embedding here. If you missed it on Saturday, prepare to cream your jeans.

If Iowa does run with Wegher next week, he'll be the third starting tailback in as many weeks for the Hawkeyes; that hasn't happened since 19Imnotlookingitup. What's wilder is that none of the three were the presumptive starter by the start of summer practice. Ordinarily, that would spell Disaster Party in My Backfield and Everybody's Invited, but now it looks as if the running game's stable for the first time since, well, the Outback Bowl.

Also, it should not be lost on observers that Wegher, Reiff, and Davis are all highly touted prospects. Though Ferentz has a long track record of turning unheralded recruits into stars, this usually takes 2-4 years of experience in the system. And while that's fine and good on a deep team, the presence of a highly rated prospect or five means instant productivity when needed. We're sure Ferentz would rather start a 22-year-old "2-star" than an 18- or 19-year-old "4 star"--often, this is the wise choice--but when depth isn't an available luxury, the talented youngster is a welcome relief. It's also a message to the Cyclones that we're going to keep bringing this pain for years and years. Your move, Rhoads. 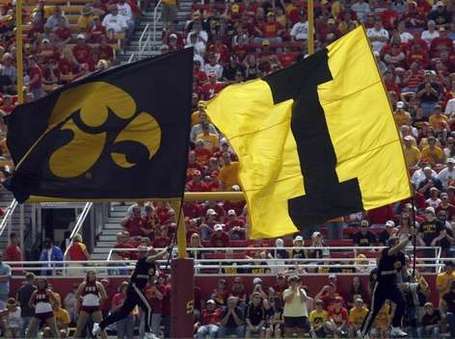 We're so sorry we had to do this, but we're actually not sorry at all: As we mentioned before, Austen Arnaud had an absolutely horrific day under center, and the Iowa defense was all too eager to pile on. All four of the interceptions were legit; though two came off tips, the tips were by Iowa defenders, not stonehanded receivers. And when Arnaud stepped aside for Jerome Tiller to try to make a dent in the Iowa secondary, Tyler Sash dutifully collected his third pick of the day; the other two went to Brett Greenwood, who played the best centerfield of his career. Even Adrian Clayborn nearly got into the act, as he read a play perfectly and nearly snagged a slant out of the air. We'd say that meant Iowa should have had six picks on the day, but odds are that the ISU drive ended in a different interception anyway, so the only variable there would have been the timing.

As Don Doxsie points out, EPIC TYLER and EPIC GREENWOOD combined for EPIC WEEKEND, registering 16 tackles, two for loss, and five picks. Doxsie goes on to say they "are emerging as one of the better safety tandems in the Midwest, maybe in the country," and if anything similar to this keeps up, we can't really disagree. Sash is the stronger of the two in most facets of the game, but together they don't leave the Iowa defense lacking in anything you want from your safeties.

This is all a deep departure from our expectations of the day, which were basically ohmygod after seeing what Pat Grace did to the defense. And while the rush defense clearly needs help, Norm Parker knew that ISU offensive coordinator Tom Herman, fresh from productive-but-gimmickwacky Rice, needed to let his smarts out more than was necessary. A few disguised coverages later, Austen Arnaud is the least welcome man in Ames since Randy Brown. 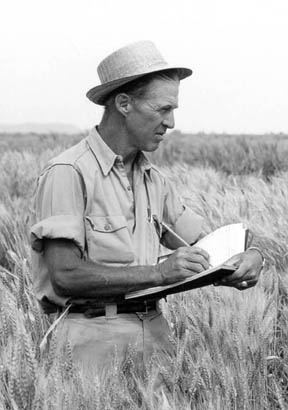 Last, but not least: Though the note isn't sports-related, it is Iowa-related: Norman Borlaug, whom history will judge as the single most important Iowan in history, passed away on Saturday at the age of 95. Though world starvation may never cease, Borlaug's contributions to solving it may never be equalled. From the Register:

A self-described "corn-fed, country-bred Iowa boy," Borlaug was called "the Father of the Green Revolution" for his work developing high-yielding strains of wheat that were credited with staving off the starvation of millions of people in Pakistan and India in the 1960s.

It has been said that Borlaug saved more lives than any other person in history, said Kenneth Quinn, president of the World Food Prize Foundation, which Borlaug founded in 1986.

Borlaug, hailed by U.S. and world leaders over the past four decades, was one of five people to have won the Nobel Peace Prize, the Presidential Medal of Freedom and the Congressional Gold Medal. The others: the Rev. Martin Luther King Jr., Mother Teresa, Elie Wiesel and Nelson Mandela.

"Thanks to Dr. Borlaug’s pioneering work to develop varieties of high-yielding wheat, countless millions of men, women and children, who will never know his name, will never go to bed hungry," former U.S. Secretary of State Colin Powell said in 2007 when Borlaug received the Congressional Gold Medal.

"Dr. Borlaug’s scientific breakthroughs have eased needless suffering and saved countless lives (and) have been an inspiration to new generations across the globe who have taken up the fight against hunger."

It's trite to say that this "puts everything in perspective," because nobody's foolish enough to believe football matters nearly as much as world hunger, but it's still more than appropriate to tip the cap to Borlaug's memory and legacy all the same. Rest in peace.

*By which we mean 15.3. Arnaud's QB rating was 15.3. While not as specific as the statistic listed here, our initial assessment of Arnaud's rating remains accurate.