Share All sharing options for: Bryan Bulaga Officially Out For Iowa State 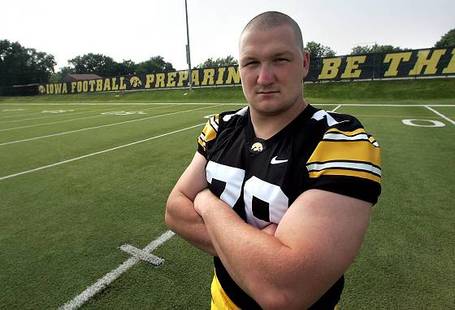 Okay, you brought the gallons of gasoline and the matches, right? Okay, great. Let's get everyone here in a pile, pour the gasoline on ourselves, then just light this sumbitch on fire, because Bryan Bulaga, despite suffering no injury, is out for Iowa State.

From Ferentz, via On Iowa:

"Bryan Bulaga was hospitalized with an illness this past week and will not be available to play tomorrow," said Ferentz. "Bryan is doing much better, has been released and will accompany the team this weekend.  We expect Bryan to return to his normal activities soon."

Rumors were all over the place up until Ferentz's announcement, so while the specifics still aren't known, at least we've got some idea of the situation. Not dying, traveling with the team, improving: all positive. Out for ISU: very, very negative.

A gent on the Hawks Nest who's been reliable in the past said this about the situation:

Today I watched Kyle Calloway, Dace Richardson, and even Dan Doering work at LT, along with a freshman named McMillan*. If it's true that he won't play....so much for o-line developing any continuity or cohesiveness yet. They did not look good today, but Binns and Clayborn were making things tough for everyone.

There were other nuggets, but there are so many practice-to-practice fluctuations in play that it's hard to read too much into "Wegher looked good today."

Either way, though, this is horrific news for Iowa. ISU doesn't exactly have a dominant rush end, but that only means that what was once a comical mismatch in terms of talent in Iowa's favor is now more of a wash. Considering the fact that Iowa's rushing game could use all the advantages it can get, "a wash at LT" won't suffice. ISU +6.5 is looking pretty enticing, isn't it?

*We really hope he means Casey McMillan, but it's far more likely he means Nolan MacMillan, who came in far more game-ready and suited for LT than Casey Mac, who is a volcano of a man who is best suited to playing all three interior line positions at once since he has four arms like Goro. We edited in the first names of the other linemen, so that way our blog engine can make it so you can click on them and it's fun.