The first Blogpoll roundtable of the season comes courtesy of our friends over at Hey Jenny Slater, the excellent Georgia blog.  Just remember: sweet, glorious meaningful football returns to us in just two days (four days for football of the Hawkeye variety).

Keep reading... it will all make sense.  Or just enjoy the video - your call.

1. Without naming names, a few teams seem to have popped up frequently on everyone's "overrated" lists in the preseason, so let's forget about them for the moment and concentrate on a different group: sleepers. Which currently unheralded team are you currently putting at least a few of your chips behind in the hopes that you'll be able to say "totally called that" once they've accomplished big things by the end of the season?
The mighty Scarlet Knights of Rutgers won me over back in the fall of 2006, when they rode the fearsome legs of Ray  "Badass Motherfucker" Rice and Jeremy "The Judge" Ito to a startling transformation: from perennial doormat and national laughingstock (even the worst programs in the other BCS conferences - Iowa State, Indiana, Stanford, frigging Duke - had more moments of glory over the preceding 30 years than Rutgers) to a 10-win season, ESPN Thursday night glory, and, wonder of wonders, even a goddamn bowl win - even if it was the Texas Bowl.  And if you think bowl wins don't matter - well, just ask jNWU how they feel about their sixty-year donut in bowl games.  Plus, the Scarlet Knights have a bitchin' mascot.  (Sadly, their other mascot is not so bitchin' and looks like Sparty's lame little brother.)  This year's Scarlet Knights outfit lacks any player as awesomely badass as Rice, as clutch as Ito, or even as battle-tested as last year's senior signal-caller, Mike Teel.  But it does have a tremendously experienced offensive line, a solid defense, a very favorable schedule (two I-AA punching bags and five conference home games, including all of the prospective "heavyweights" in Pitt, USF, and Cincinnati), the wood-choppingest coach around, and a conference that no one has a clue about - anyone but Syracuse or the Fightin' Kragthorpes could win that league and no one would really bat an eye.  Rutgers might lack any sexy, headline-grabbing, highlight-featuring players, but I won't be shocked if they're sitting there in December having racked up ten wins and planning a trip to the Orange Bowl. 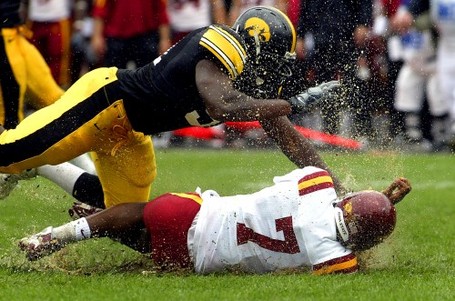 2. In a similar vein, pick a sleeper player on your team whom nobody's talking about right now and tell us why we will be talking about them by December.
Broderick Binns.  Iowa fans have been quietly giddy about him ever since he made some cameo appearances last season and displayed his tremendous pass-rushing skills and freakishly long arms.  He made the expected move into the starting DE spot on the depth chart this month, displacing another pretty talented DE in Christian Ballard (who moved inside to DT).  In limited action, Binns had 20 tackles, including a pair of sacks as well as a couple pass break-ups, and looks set to terrorize QBs in a way that no Iowa DE has done since Matt Roth roamed the field.  Binns has a great first step, an unstoppable motor, and those Stretch Armstrong arms that enable him to shuck offensive linemen and yank down quarterbacks.  The Iowa coaches, usually pretty modest when it comes to compliments about their own players, have been raving about him and calling him virtually unblockable.  He hasn't exactly been going up against slouches in practice, either - offensive tackles Bryan Bulaga and Kyle Calloway figure to feature prominently in All-Big Ten lists come December.  If Binns brings that same level of ability from the practice field to the game field this year, there's a good chance that he'll be joining his offensive teammates on All-Big Ten lists when December rolls around - and he'll leave a trail of QB carcasses in his wake.
3. Florida is about as big a consensus favorite as we've seen in recent years, but remember, USC got 62 out of 65 first-place votes in the AP's 2007 preseason poll and still managed to lose to Stanford. Given how difficult it is to go undefeated period these days, where do you think the Gators are most likely to stumble in the regular season?
I know the consensus opinion is that Florida's toughest game will be against LSU in Baton Rouge or maybe against one of their top rivals, like Georgia or Florida State.  And that very well may be true, but that's not very interesting.  So I'm going to take a 180 from those choices and go with… Mississippi State.  Yes, the same Bulldog outfit that went 4-8 last year and lost a 3-2 shitfest to Auburn (a game that managed to be topped - bottomed? - by the Pitt-Oregon State Sun Bowl only a scant few months later… and, trust me, Iowa fans know a thing or two about low-scoring shitfests).  Well, not quite the same Bulldog team… they sent lovable old Sly Croom packing and brought in hot shit assistant Dan Mullen… who just so happened to mentor The Tebow in the ways of the quarterback while at Florida.  So he might have a little inside info about the Gators.  Plus, history is on his side - the Gators haven't beaten the Bulldogs in Starkville since 1985.  Starkville was the site of  Zook's Waterloo five years ago and even the Visored One couldn't master those surroundings (although there was a curiously large gap in games between Mississippi State and Florida in the '90s - I guess that gets chalked up to the oddities of the SEC's conference scheduling?).  And the third strike against Florida could be the fact that it's set up to be a classic trap game - it's the week before the big Cocktail Party showdown with Georgia, so it's not implausible that the Gators' attention may be a bit divided.  So if Mississippi State pulls the upset of the millennium on Halloween, don't forget who called it. And if Mississippi State happens to get rolled by 50 points… um, let's just pretend this converation never happened. 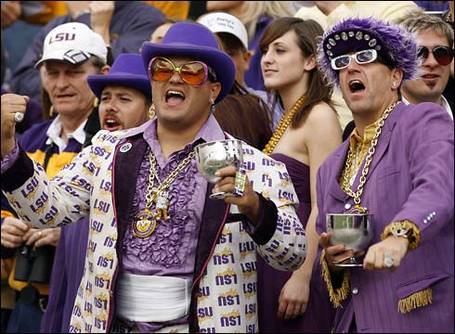 4. Which regular-season game not involving your team or conference are you most looking forward to this year?
The Red River Shootout (fuck that PC "Red River Rivalry" noise) should be an tremendously exciting game with a incredibly intense atmosphere and points a-plenty… but everyone's going to say that game, right?  And, shit, we saw in the bowl games last year that those absurd, video game numbers that the Big 12 offenses put up were a bit of a mirage: match them up against a credible defense (Ole Miss, Florida, Ohio State) and, shockingly, the points don't flow quite so freely.  So give me a game where the atmosphere will be just as intense, where the fans are every bit as crazed (if not a little bit more crazed), where the national importance will be almost as great… and, fuck, where they'll probably even play a little bit of defense.  So give me LSU-Florida in the cauldron that is Death Valley in Baton Rouge.  Two years ago Tebow went down there and did some un-Jesuslike taunting to the fans who'd gotten ahold of his phone number and jammed up his voicemail; will LSU fans dare challenge The Tebow this year?  (I vote that they go all "Christians vs. Lions" (see above or here) and slip Mike the Tiger into his hotel room and make them wrestle.)
5. In honor of Georgia's opening-weekend opponent and their most prolific booster, let's say you somehow come into T. Boone Pickens money and can buy anything you want for your program -- facilities upgrades, an airplane for recruiting, buy out the contract of that coach you hate, you name it. Where does your first check go?
I'd paint a big damn tiger hawk on that fucking water tower.