It's Not Plagiarism If You Link to It Makes a List, Checks it Twice

Share All sharing options for: It's Not Plagiarism If You Link to It Makes a List, Checks it Twice

It Begins.  Fall practice opens today, with the return of Iowa Media Day.  If you thought Big Ten Media Days were pointless, you ain't seen nothing yet.  Reporters show up looking for news and walk out with pictures of spaceblocking. 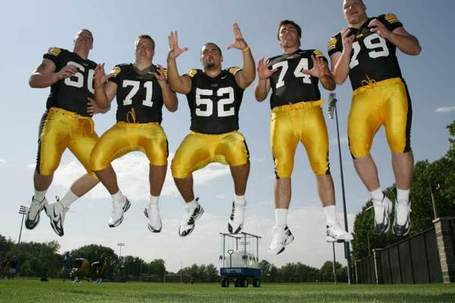 There is the inevitable Kirk Ferentz press conference at 1:30, followed by player interviews/fawning that would make Chris Berman jealous.  If anything happens, we'll let you know.  Short of Norm Parker having a flashback to his days in Korea and stabbing Pat Harty through the neck with a steak knife, it doesn't look promising.

The MANCOTT Pays Off.  After seeing what happened to the Davey O'Brien Award and all things tangentially related to it, the various college football award committees are tripping over themselves to include Hawkeyes on their watch lists.  Amari Spievey was named to the Jim Thorpe Award watch list, for the award given to the top player in the defensive secondary.  Ryan Donahue made the Ray Guy Award list for the best punter, as well.  It's a good thing, too; had they not made their respective lists, OPS was threatening to MANCOTT Macho Man Randy Savage, Gil Thorp, Everybody Loves Raymond, and being a dude (thereby making it a WOMANCOTT or, as he put it, a EUNUCOTT).

Six-Shooter, Riding Into the Night.  This is where the summer ends: Former Iowa signal-caller and gifted impressionist Jake Christensen has finally landed at Eastern Illinois University, where he will be eligible to play on day one.  Morehouse says he "was as polarizing a figure in Iowa sports as Steve Alford."  I wouldn't go that far; fans didn't hold the same level of unadulterated outrage for JC6 and weren't openly happy at his failures as they did for Alford, mostly because he (1) is a kid, and (2) always played hard.  But there's no denying the schism in the fan base, split into pro-Christensen and pro-anyone else camps during his one season as a starter.  By the time last season opened, the relationship was irreconcilable, and the coaches had no choice but to look elsewhere.  And JC6 took the demotion with class, supporting his understudy and never even hinting at how he felt about what I'm certain he saw as a raw deal.  It was that maturity that won him respect with the fans, and that maturity is why he's receiving the well wishes of Hawkeye fans today.