Living in Minnesota and being married to a Gopher fan, I have the annual chore of accompanying her and her family to the Minnesota State Fair. Which isn't so bad, given the plethora of Big Fat Bacons, deep fried cheese curds, and anything on a stick hat you could imagine.

I visited the U of M building where in past years they proudly displayed the various trophies they possess from the previous year's victories. This year it was pretty freaking empty, though they did have a constant loop of highlights from the Florida Atlantic and Indiana games playing.

They were also giving out these magnets: 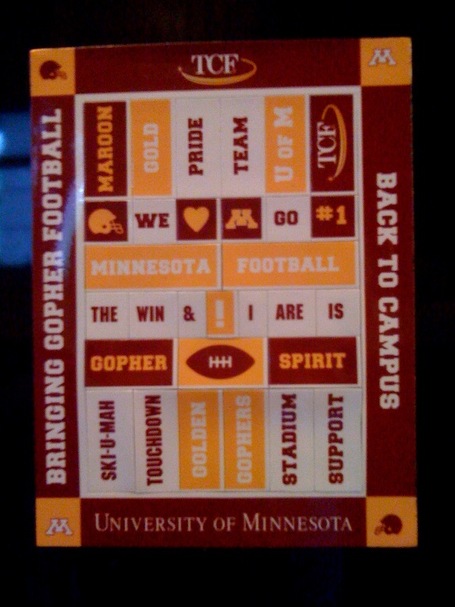 See that in the middle? It's an exclamation point, dead center of a gibberish Brewster GO FIGHT WIN sentence.

I'm guessing they asked Brew to come up with the word selections for the magnet. Or maybe the person who Twitters for him is responsible?