It's Not Plagiarism If You Link to It Breaks the Youtubes

Share All sharing options for: It's Not Plagiarism If You Link to It Breaks the Youtubes 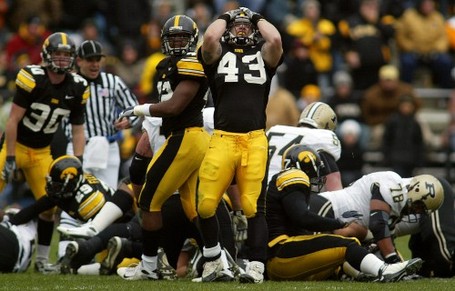 Pat Angerer is getting Angererier

Like a Comforter Made of Rainbows and Dreams.  The inevitable upshot of sending your three best seniors to talk to the media:  Fluff the likes of which we won't see again this season.  How bad is it?  Don Doxie of the Quad City Times (whaddup, 563?) wrote not one, not two, but THREE stories on Pat Angerer this weekend, all of which reiterate the widely-held consensus that Angerer has gone through a lot in his time at Iowa and is very good at football.  Angerer might also be a little insane:

"I think I’m the guy who has to reel Pat in when he gets a little carried away," Edds said. "On defense you need to have a fire and brimstone guy. Mitch played that role in the past and Pat’s going to be that guy this year … He’s definitely the emotional leader of our defense."

Edds recalls many times in the past few years when King would get angry and get in the face of teammates to get them fired up at a crucial point in the game.

"It’s healthy to have that sometimes, but you couldn’t have 11 Mitch Kings out there," Edds said. "You’d have a personal foul on every play."

Angerer was hardly the only object of affection last week; Jewel Hampton gets the television treatment from John Campbell, Tony Moeaki goes home (but just for a couple of days), and A.J. Edds channels Coach Ferentz and talks about Dick Stanzi's "laid-back" demeanor.  There is nothing to take away from any of these stories, other than that warm feeling you get in the cockles of your heart when you realize that fall camp opens Friday, and the long national nightmare that some call the offseason is nearing its end.

Revel in the Monochromatic Majesty.  The Athletics Department has announced the (insert color here)-out dates for this season.  Their selections are less than stellar:

Fans of the nationally ranked University of Iowa football team are once again being encouraged to be colorful in their support of the Hawkeyes.

The annual "Be Bold, Wear Gold" game has been set for Saturday, Sept. 5, when Iowa opens the 2009 season against Northern Iowa in a game that is scheduled to kick off shortly after 11 a.m. Iowa time and will be televised live by the Big Ten Network.

That game will be the final event of the first FRYfest celebration and, appropriately, the official t-shirt for this year's Gold game features an image of Hayden Fry, Iowa's Hall of Fame head coach....

Iowa's date with Pac-10 powerhouse Arizona coached by former Hawkeye Mike Stoops has been designated this year's "Blackout Saturday." That game is scheduled for Sept. 19 at 2:30 p.m.

I have no real issue with using the Blackout on Arizona; the Wildcats (despite the prognosticators' predictions) are the highest profile non-conference home opponent since the rival Sun Devils came to Kinnick in 2003, the 2:30 kick coincides with national television coverage, and the game is early enough in the season that Public Safety doesn't get nervous about 70,000 people clad in black running through the streets in the dark.

No, the travesty is using the Goldout (I hate the "Be Bold" thing) on Northern Iowa, a throwaway game against a sacrificial lamb scheduled for 11:00 that will be watched by nobody outside the state.  In a year when night football finally makes its triumphant return to Iowa City, to throw that game away on anything other than Michigan is to waste a golden (sorry, can't help myself) opportunity to turn Kinnick Stadium into a seething, throbbing, whiskey-fueled, Technicolor hornet's nest which can only be stopped by the Troy Smith/Antonio Pittman/Ted Ginn Mighty Morphin Power Decoder Rings.

Face it: Michigan doesn't have an answer for that.  To give it away so that the AD can sell a couple of t-shirts to a contrived pseudo-event created solely to sell tickets to a game nobody would otherwise attend is the height of idiocy, and is the latest in a long list of signs that Gary Barta simply doesn't get it.

Of course, Iowa will play one monochromatic night game this season:

Fore the Win!  When I played golf in the hallway of Currier North 100's back in 1999, I was just the golf-playing guy.  I wasn't getting weekend coverage from The Sporting Blog.  Of course, I also wasn't producing the most mind-blowing video to come out of the University of Iowa in years (soundtrack aside), like the gentlemen of Slater Seven:

I'll go ahead and say it: These guys should be on scholarship.  If we can give a full ride to baton twirlers, we should be able to find some money for the kid who can putt a golf ball out of his dorm room, off the wall, down eight steps, and into a plastic CHA collectors' cup.  Someone start a petition for this.