Share All sharing options for: It's Friday And I'm Allowed To Veer Wildly Off-Topic On Friday 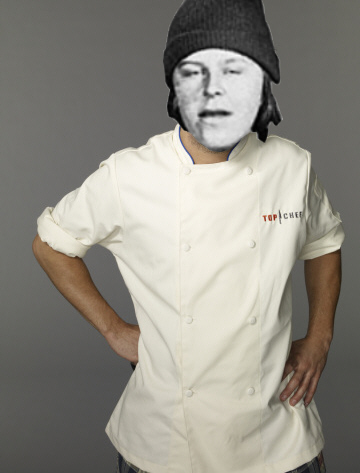 This is my sexy chef pose.

Okay, so on this Top Chef show, they started some new season in Las Vegas this week,and one of the first challenges was to create a dish around a certain vice you had. Most people chose drinking. Big shocker.

But if I were on that show, when they did the vice thing, I would have made up some vice about like being too neat and having my dish in four separate parts and I'd tell them that each was like this different delicious aspect of a dish that the judges would have to mix together themselves. So then the judges would eat them and they'd be horribly made and possibly urined in, and then they'd recoil in horror when they ate it, and I would tell them, just kidding, my vice is lying.

BALLINEST EJECTION FROM TOP CHEF EVER.

(It was either post this or talk about the depth chart, and we're not there yet, emotionally.)