Share All sharing options for: Assume The Position 2009: Defensive Tackle

It's about that time again.  For the next three weeks, BHGP will be previewing this year's Iowa Hawkeyes, position-by-position.  Naturally, as the earth revolves around the sun, things will change.  Therefore, we're starting with the position where we are most certain, and ending with the position of which we are least certain.  To date: 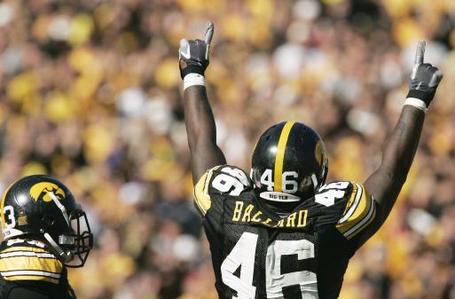 Well, that's that, isn't it? With the moderately unsurprising shift of Christian Ballard to defensive tackle--and really, it was either him or Clayborn, we just weren't sure who it'd be--the 2-deep on the interior defensive line shifted into place quite nicely. Let's do this.

Christian Ballard (#46, 6'5", 290, Junior) - Ballard appears to be the best suited to move to the inside, so that's where the man goes. We have a few concerns with how high he tends to play, but that's based on his body of work at DE, where it's more beneficial to play upright. No doubt, the coaches will be working on him getting lower when he's got A Gap responsibilities.

Karl Klug (#95, 6'4", 258, Junior) - If Klug's at or near 260 pounds, that's a positive development, because he's going to need all the size he can get against the road graders of the Big Ten. Still, in his limited play last season, he was a terrorforce, earning BXI DPOTW honors against FIU and making a couple big red-zone tackles against Penn State. Yes, fully half of his 18 tackles came against FIU, but registering 5 TFLs in 18 total tackles speaks volumes about Klug's disruptive abilities.

The Ballard move should benefit Klug the most. Teams will probably be much less likely to single-up on Ballard than Daniels, even if for no other reason than respect for Ballard's superior size. Three blockers can run right over Daniels and Klug. With Ballard and Klug, it's probably a fairer fight. So if Klug can keep from being buried on the interior and log about 60 snaps per game, Iowa's in good shape.

Mike Daniels (#93, 6'1", 267, Sophomore) - Was atop the depth chart before Ballard made the shift, even though we all sort of knew that he wasn't actually going to get the lion's share of snaps at DT when the Hawks got down to business. Granted, the people in front of him on the depth chart in 2008 commanded the vast majority of the snaps, but it didn't seem like they put him on the field in a grooming role as much as you'd expect for a player who was bound to start the next season.

As a matter of fact, the only time we really heard about Daniels was when he momentarily collapsed on the Kinnick field after the Indiana game, but the chatter's a lot better now (not hard to do better than "scared us into thinking that he was dying," of course). Morehouse mentioned that Daniels had "the pad level of an armadillo" and there were other reports that Daniels was making the OL look silly in practice. Got to think he's the first man in for Klug on rotation duty, right?

Cody Hundertmark (#64, 6'4", 280, Sophomore) - Even if Hundertmark's healthy these days, he missed so much time with a shoulder injury that his development has to have been stunted quite a bit, and that's probably going to cost him a substantial amount of snaps this season. It's a shame, really, since if he'd kept bulking up and getting stronger (the latter's a little hard to do with a bum shoulder), he'd have been able to step up into the Kroul-esque role of a big gap-stuffer who keeps blockers off the LBs. Well, he's still only a sophomore.

Steve Bigach (#54, 6'3", 270, Freshman (RS)) - He's probably a year away from really making an impact, but he's already on the 2-deeps, so perhaps he's pushing the issue in his favor already. Bigach played basketball, track, and lacrosse in high school, so he's probably got good enough footwork for the trenches.

His highlight reel, which might not even be on GoHawks.com anymore (and we just can't be bothered to check, you see), indicated some of that athleticism - though he was hardly fluid, he moved efficiently--and hit harder than the death of a childhood pet. He's probably a 4-letter winner in the making.

Travis Meade (#61, 6'0", 285, Junior) - Oh yeah, this guy. Was entrusted with the starting LG job in 2007 for some reason, a disappointment that may very well scare Ferentz off from ever letting Meade on the field in a halfway-meaningful situation ever again.

But perhaps "Mop-Up Duty" is a bit harsh; Meade is stout enough that if Iowa needs a bowling ball in the middle to plug up a gap inside the 10 yard line, he might get a look. He's not on the 2-deeps and probably won't be making an appearance there barring disastrous circumstances, but of the mop-up crew, he's probably first in line.

Joe Forgy (#97, 6'4", 250, Sophomore) - A preferred walk-on from Ellsworth CC, and a native of Dows, IA. Dows is a horrible town that should be razed. Still, he was an honorable mention All-American for Ellsworth and he's got a big frame. Maybe he can put some pounds on and win a Next Man In award a couple years from now. Needs a damn haircut.

Luke Halstad (#90, 6'3", 265, Sophomore) - Slightly undersized kid from nearby. Iowa was only BCS school to offer, but coaches seemed high on him a couple years ago. Recruited as a LB/TE, but moved inside during redshirt year. Probably a year or two (and 20 pounds) away, but could see some goal-line duty. Classically trained cellist.