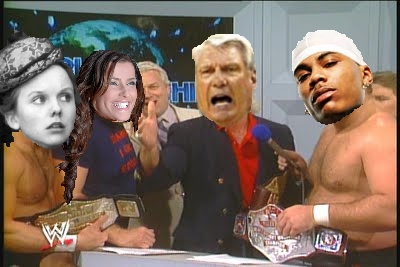 No, it's Fornelli.  That's four Nellys.  On World Championship Wrestling.

After a couple of technical difficulties, we present the long-awaited second episode of Black Heart Gold Podcast, in which your intrepid hosts crack wise with blogger nonparaleil Tom Fornelli.  Tom is the founder and editor of Foul Balls, a Chicago-centric site, and contributing writer at AOL Fanhouse and Sports by Brooks (where he works with Oops Pow Surprise). When not writing half the sports content on the Interwebs, Tom is covering Big Ten sports at his newest creation, Blog Ten.  We start with Twitter, end with Charlie Weis making a meal out of Disney World, and discuss Rick Stanzi's Heisman hopes in between.

Note: Part of the technical difficulties were issues with cleaning up and amplifying the sound from Tom and Oops Pow, who were calling in. We know it's far from perfect, and we're working on the problem for future episodes. I'm not saying it's inaudible, but you may want some headphones.