Preseason BlogpLOL: True Knowledge Exists in Knowing That You Know Nothing

Share All sharing options for: Preseason BlogpLOL: True Knowledge Exists in Knowing That You Know Nothing 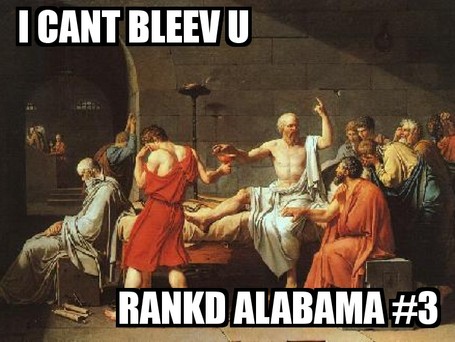 Why do we even bother?

No, I don't mean why do we bother with playing this season, given that Florida returns all eleven defensive starters and Tim Tebow from last year's national championship team; not since the Leinart/Bush/Williams uberteam from 2005 has a squad received such universal preseason acclaim.  I can't complain with that, as you can see below.


No, I'm asking why we bother with preseason polls, which essentially boil down to reading Phil Steele, looking at the number of returning starters, and throwing a dart at a board.  That 2005 USC team that was being annointed as the greatest of all time in August ran into Vince Young in January.  Over the last seven years, the eventual Mythical National Champion was ranked, on average, sixth in the preseason coaches poll. (Do yourself a favor and don't check who is sixth in this year's preseason poll.  I'm warning you, don't do it.  You did it, didn't you?  Fucking Ohio State.)  Only once, in 2004 with Southern Cal, did they get it right (and the undefeated Auburn squad which had a legitimate claim to half that championship was preseason #18).

I'll be the first one to admit it, and I hope we can all agree: We know nothing.  We have a vague idea of which players will be important to each team's chances, where the important games fall on the schedule, and which teams are full of experienced starters.  What we don't know, though, is what kills us.  We don't know which quarterback is going to morph into an offense-killing interception machine (we know Juice Williams will remain an offense-killing interception machine, though).  We don't know which halfback or linebacker will blow out his knee in week 3.  We can't predict how this is going to play out, but that never stopped us from trying because there are column inches to fill and meaningless debates to be entered and hours to kill before the start of the season.  The AP had it right when they banished the preseason poll a few years back, then caved and reintroduced the poll last year.

So yeah, I have Alabama at #3, ahead of OU and USC, because 8 returning starters on a Nick Saban defense from a team that nearly went undefeated in the SEC last year despite not having a discernable offense looks a little scarier than the Sooners' decimated offensive line and USC's quarterback shuffle.  I have Georgia Tech at #9 because they're nearly impossible to gameplan for and bring back virtually all of an offense that was freakishly good last season despite learning a complicated, foreign offensive system on the fly.  I have Iowa at #11 and Penn State at #13 because I have more faith in a team that returns16 starters, including a borderline-excellent defensive secondary and a quarterback that looks to be on the verge of making "the leap," than a team whose entire 2008 offense revolved around a bevy of 4-star running back/receiver combo types showing up in random spots, getting the ball in space, and making defenders miss, and which is replacing those 4-star receivers with Graham Zug.  I have LSU and Georgia lower than most (and yet, I think too high) because they have quarterback issues and play in the SEC, and yet I have Vandy at #24 even though they too have both of those problems.  I have Central Michigan at #23 because Dan LeFevour is back and he's really fun to watch and deserves all the Tebow praise just as much as the chosen one but will instead finish his college career - if he's lucky - playing Minnesota in Detroit in December, and they have a defensive end named Frank Zombo, and I'll be damned if a semi-legitimate football conference like the MAC is shut out of the poll so I can include the latest travesty from the Big East.

Can we kick this damn thing off already?