Share All sharing options for: It's Not Plagiarism If You Link To It Can Feel The Hate 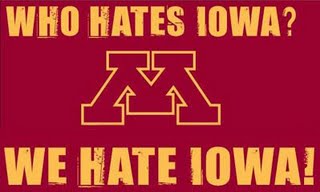 HATE HATE ANGER GRR RAGE HATE Hate has been in the air of the blogosphere lately - you can find it in the strata under the countdown lists and above the coaching hot seat rankings.  ESPN kicked things off with (what else?) a  Top 40 list of college football's greatest villains (notably missing: 2005 Outback Bowl officials).  The ESPN college football bloggers got in the act after that, contributing team-by-team lists and lists of the top modern villains in college football.  So who does Iowa hate the most, according to Adam Rittenberg?

Current villain: Bret Bielema. The former Iowa defensive lineman now coaches at rival Wisconsin, despite still having a Hawkeye logo tattooed on his leg. Bielema has won two of his first three games against his alma mater.

All-time villain: Eric Ball. The UCLA freshman rushed for 227 yards and four touchdowns against Iowa in the 1986 Rose Bowl, leading the Bruins to a 45-28 victory and preventing Iowa from a No. 2 finish behind Oklahoma.

What the fuck?  What kind of half-assed research did Rittenberg do to come up with those choices?  There's certainly hatred out there for Bielema, but to say that he's the biggest current villain?  When his own fanbase has almost as many detractors (for that pesky tigerhawk tattoo and the diminishing on-field returns they've had over in Mad-town over the last few years) and when he's probably not even the most hated coach in the Big Ten (I might go with guys whose names rhyme with "crook," "vessel," and "bitchgerald") among Iowa fans?  But that pick looks positively visionary compared to his choice for All-Time Villain.  Eric Ball?  Eric fucking Ball?  Yeah, he had a big game there, but there's one man who played in that Rose Bowl who inspired the most anger/hatred/disgust among Iowa fans -- and it's not Eric Ball.

Even his suggestion for Minnesota was a little off:

All-time villain: The Metrodome. A former national powerhouse, Minnesota became largely irrelevant after moving inside the dome in 1982. The Gophers won more than eight games just once in 27 years indoors, endured 15 losing seasons, never beat Michigan at the dome and ended things with a 55-0 loss to archrival Iowa. (emphasis mine)

I mean, that implies that they were relevant prior to the Metrodome move - a hard point to prove when they didn't make a bowl game in the twenty years prior to the move into the HumpDump and had only a single Big Ten co-championship to show for their efforts in that time.  All the Metrodome move did was give them a nice climate-controlled environment to continue their trend toward mediocrity.  Besides, we all know who Minnesota fans really hate.  (H/T to commenter RonnieGotPaid)

To his credit, Rittenberg did recognize his error and offer some better suggestions (Iowa State, jNW) after some other Iowa fans pointed out the idiocy of his former choices.

Goodbye, farewell, au revoir... wait - he said WHAT?  Continuing our "Thursday is Hate Day" theme, we move onto a story featuring the most polarizing - oh, who are we kidding... he was just flat-out hated - figures in recent Iowa football history.  No, not Adam Shada -- the one, the only Jake Christiansen.  He got his waiver to resume his playing career at Eastern Illinois, but he apparently couldn't resist leaving Iowa without a few... curious comments about his days in Iowa City.  He had a few nice things to say in an ESPN  interview, but there's one comment there that sticks out (and it's not the one about KOK not teaching QB mechanics):

"As far as having a fair shot, in my heart I can't really say that I believe that," he said. "But that being said, I don't have any negative energy toward them. They did what they did and it worked out for them. They are where they want to be."

Um, what?  It's hard to think of another player who's gotten more opportunities to start and prove himself than Christiansen.  In 2007, he got every snap (sans a few garbage time snaps in the Syracuse game that went to Stanzi and Arvell Nelson) and he got multiple opportunities to strut his stuff in 2008 (including, most controversially, the second half of the Pitt game).  Yeah, he didn't exactly walk into a very friendly situation in 2007, what with an offense ravaged by injuries and suspensions, but how many chances does a guy need to get?  Good luck at EIU, Jake, but if you really think you were that wronged at Iowa... maybe all those sacks you took in 2007 rattled your brain more than we thought.

To be fair, the ICPD has yet to begin caning criminals.  Fellow SB Nation blog and all-around big kahuna in the blogosphere, Everyday Should be Saturday checks in with their Iowa season preview with the Hawks checking in at #21.  It's an entertaining and rather fair preview, highlighted by this glowing praise for Pat Angerer:

You know you’ve sprung from a long line of badasses when your initial, nameless ancestor came before the Saxon naming committee, and their consensus was "One who pisses you off to the point of murderous rage." You’re an even bigger badass when your ancestor hears that, beats everyone in the room senseless with the arm that wasn’t ripped off in a fight to the death with a swamp monster, and then happily accepts the name before taking to the marital pallet to pound out an endless stream of equally fierce man-pups, one of whom was second in the Big Ten in interceptions last year.

Angerer actually shared the conference lead in interceptions, but why quibble?