We're not huge fans of the countdown stuff, mainly because it involves consistency and commitment--the fact that none of us are married should tell you how good we are at those things. But there's 16 days until Iowa football starts up, and when you talk about #16 and Iowa football, we've got no choice but to run this: 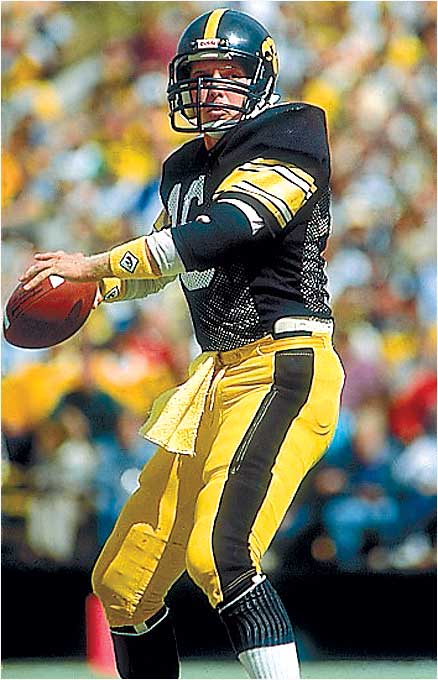 This is literally the best picture of Chuck we could find, and boy howdy did we try.

It's a shame that Long's post-Iowa career has been marked with such abject failure. First, he was tossed into the quarterback-chewing food processor that is the Detroit Lions franchise, where his career quickly petered out (think he wouldn't have done anything under, say, Don Coryell instead?). Then after working his way up through the assistant ranks and excelling at Oklahoma (which, as it turns out, is as meaningful as Tim Brewster and Gene Chizik excelling at Texas), Long got a job at San Diego State, which was a school that was only successful when some guy named "Marshall Faulk" was in their backfield. That failed so spectacularly that Long made headlines for not leaving SDSU after being fired, as his contract said that he could be reassigned instead, which is exactly what he made happen. Not good when your career has devolved into pulling a Costanza. Not good.

It's all a shame because it obscures the brilliance of Long's career at Iowa.While Kirk Ferentz's career was certainly secured by Bob Sanders, Hayden Fry's legacy was cemented by Long. Fry first made the Rose Bowl in the 1980 season without Long--well, unless you count Long's garbage duty in that game--the 1985 season in which Long nearly won the Heisman was the iconic season of success for the Hawkeyes. Say what you will about 1958 or 2002, but one is left to the memories of grandfathers and the other--and keep in mind, I'm talking about the best season by far that I can personally remember--had nothing that shook the world like this: 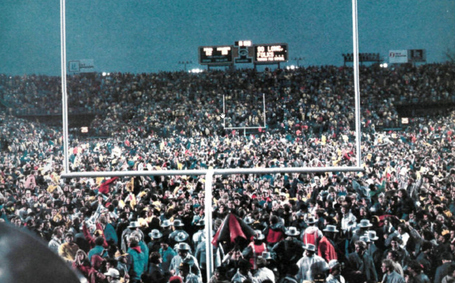 We probably don't need to tell you which game this is. (Definitely click for the large version anyway, though)

So it's with a modicum of disappointment that we acknowledge that the UI has not, in fact, retired #16; as a matter of fact, it's in use right now, worn by backup QB James Vandenberg.  While Long satisfied neither aspect of the "tragic hero" label to the extent that Calvin Jones (#62) and Nile Kinnick (#24) did, he certainly shares some similarities. Perhaps reserving the #16 for special QBs, not unlike Michigan's #1, would be fitting.

We're not going to be upset, of course, if Iowa has #16 in the regular rotation of numbers. It's a footnote of history that has little to any bearing on the day-to-day business of running a football team. It ain't raise-a-stink-worthy. But it would be a cool way to recognize the best Iowa football player of the last 50 years.