Share All sharing options for: It's Not Plagiarism If You Link To It Got Punked by Rick Kaczenski 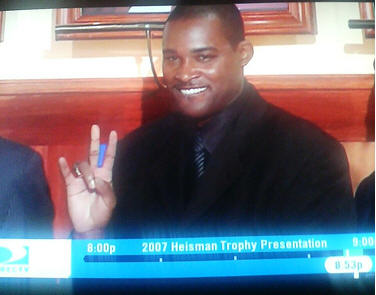 Andre Ware, down with the CBE Classic

Save the Date.  Iowa released the men's basketball and wrestling schedules yesterday.  On the basketball side, Iowa is part of the field for the CBE Classic, a "tournament" in only the most liberal sense of the word.  12 teams are technically included; Iowa hosts a "regional" with Illinois-Chicago and Duquense (dates TBD, November 15-19), but automatically qualifies for the semifinals regardless of its performance.  On November 23, Iowa gets Texas in Kansas City, and the "championship" and "consolation" games against the winner/loser of Pitt-Wichita State will be played the next day.  I'm not saying it's a foregone conclusion, but you have 3 months to work on Shocker jokes.

Elsewhere in basketball scheduling, the in-state gauntlet starts at Northern Iowa December 8, with a trip to Hilton on December 11.  After a break for finals, Drake comes to CHA on December 19.  Big Ten play opens with Purdue December 29.  On the revenue front, Iowa scores three Saturday home games in January (Bloodpunch's threats worked, apparently), but doesn't play another weekend home game until February 28 against Indiana (so maybe not).

On the wrestling front, the most intriguing matchup is clearly Cael Sanderson's return to Iowa on January 29.  ISU hosts the Two-Time Defending National Champions on December 6.  Iowa gets virtually all the true Big Ten contenders to the throne at home; the only road threat looks to be @ Minnesota on February 14.  All in all, a favorable draw for the champs.

CONSUME, MINIONS!  CONSUME!  We've received a couple of emails asking what happened to the "Stanzi is the Manzi" shirts from last year.  It's a long story, but suffice it to say a letter from the Athletic Department stating that we were violating NCAA rules and demanding we cease and desist production of those shirts for fear of jeopardizing Slick Rick's eligibility got us to stop.  Turns out you can't use a player's name on merchandise!  Silly us! 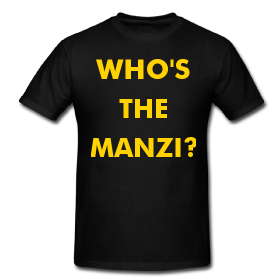 Now available at Black Heart Gold Shirts for just $20.  Also available are the NCAA '10 version of the Manzi shirt (completely legal; just ask EA Sports) and our ISU shirt, guaranteed to get you slapped by a Cyclone offensive lineman and her sorority sisters.

The MANCOTT Is Working.  The word is out: Things named Davey and/or O'Brien are suffering so much from the MANCOTT that other watch lists are falling over themselves to include Hawkeyes.  The Manning Award, given to the nation's best quarterback, included Dick Stanzi on its watch list, thereby ensuring a Giants-Colts Super Bowl.  Bryan Bulaga is a Lombardi Award watch list member, and Pat Angerer is up for the Chuck Bednarik Award for best college defensive player.  In other words, if and when Vince Vaughn guest stars on NBC's "Chuck" it will be THE BEST TELEVISION PROGRAM EVER.