Share All sharing options for: Assume the Position 2009: Cornerback

It's about that time again.  For the next three weeks, BHGP will be previewing this year's Iowa Hawkeyes, position-by-position.  Naturally, as the earth revolves around the sun, things will change.  Therefore, we're starting with the position where we are most certain, and ending with the position of which we are least certain.  To date: 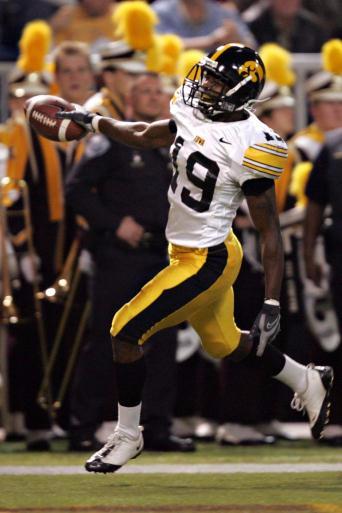 There's a reason we hold off on the convoluted depth chart battles until the end of August.  Sometimes, like when Austin Signor transferred out before last season, an otherwise toss-up spot resolves itself in fall camp.  For better or worse (and, let's not kid ourselves, it's worse), left cornerback this year is one of those positions.

Amari Spievey (#19, 6'0", 190, Junior) - Iowa has a far greater reputation for safeties than cornerbacks.  Of the corners to play at Iowa under Kirk Ferentz, the most successful at the professional level is arguably Benny Sapp, who was kicked off the team before his junior year, finished his career at Northern Iowa, and has built a nice life as a nickel back.  So it says a lot for Bradley Fletcher that he started for one season, performed admirably, and was drafted with the second pick in the third round of the draft.

It says even more for Amari Spievey that, despite those facts, Fletcher was probably the second-best cornerback on last year's team.  Spievey didn't come from nowhere, but Fort Dodge is as close to nowhere as one can get.  After being named Connecticut high school player of the year (and getting a baffling 2-star rating from both Rivals and Scout), Spievey earned an All-American JUCO selection in one season at Iowa Central.  He hit campus last fall and locked down the starting position almost immediately, showing speed, agility, and the ability to hit like a truck.  He recorded 68 tackles, intercepted 4 passes, returned one for a touchdown, broke up six passes, forced a fumble, cured malaria, invented the longer-lasting lightbulb, and performed the surgery on Norm Parker's toe.  In response, Norm says he might be the best corner he's coached at Iowa.  Rittenberg ranked him the #15 player - and best corner - in the conference. There's talk of him jumping to the NFL early.  In other words, the secret's out.

The Other Starter, Eventually

Shaun Prater (#28, 5'11", 175, Sophomore) - Right cornerback is a lock. Left cornerback was a cage match between Shaun Prater and Jordan Bernstine; Bernstine had the top line on the depth chart, but inside word was his hold was tenuous at best.  Bernstine's broken ankle finished the battle before it started.

Prater entered the program last season as a universal 3-star recruit, coming off a tremendous senior season at Omaha Central High where he recorded 83 tackles, intercepted 5 passes, and forced a pair of fumbles.  Almost immediately after he entered fall camp, the coaching staff began praising his skills.  He shrugged off a redshirt and played in every game last year as a true freshman, recording 11 tackles and 2 pass breakups. He then went out to celebrate those 11 tackles, had a run-in with a rogue whiskey-dispensing bartender, and was picked up for DUI.  Prater will serve a two-game suspension, opening the door for one of the other candidates to take the job.  With that said, after yesterday's open practice, it's readily apparent that he will be the eventual starter, likely in week 3 against Arizona.

Willie Lowe (#10, 5'10", 170, Sophomore) - Lowe was the second true freshman to see action last season at corner, though his playing time was much more limited.  He is a product of Glenville High (Cleveland, OH), and came to Iowa after receiving 2 all-Ohio mentions, a 2-star rating from the stalkers, and offers from North Carolina, N.C. State, West Virginia, Indiana, and most of the MAC.  After recording 2 tackles in limited action last season (Lowe played against Maine, Minnesota, and South Carolina), he finished spring practice as the co-backup left cornerback.  Recently, Phil Parker has praised his development over the spring and summer.  Lowe's size - or lack thereof - will always be a concern, even though Lowe has shown solid tackling technique.

Bernstine's injury and Prater's suspension translate to 2 likely Lowe starts against UNI and ISU.  Solid performances in those games against pass-first offenses who will undoubtedly be targeting the sophomore could give him an outside shot at starting full-time.  More than likely, however, he'll remain a backup to Prater and potential nickelback.

Greg Castillo (#2, 5'11", 180, Freshman (RS)) - Castillo was one of the final additions to the 2008 recruiting class.  Completely ignored by Scout, given 2 stars by Rivals, berift of non-MAC offers, and verbally committed to Villanova, Castillo received an offer from Iowa on the eve of Signing Day and committed on the spot.  Castillo might well be one of the diamonds in the rough unearthed through Ferentz's NFL connections; Greg's dad is the offensive line coach with the Philadelphia Eagles, and one of KF's selling points to Castillo was the Iowa program's pro-style organization.  He enters fall camp as Spievey's backup, but could see some early-season action with the lack of depth at corner.

Chris Rowell (#34, 6'0", 195, Senior) - Which brings us to the sordid saga of Chris Rowell, a special teams superstar who has never been able to break through.  Rowell is another native of Ohio, receiving 3-star rankings from the recruiting services (as a safety) and a host of offers from big names (Ohio State, Michigan, Wisconsin, West Virginia, Pitt, etc.)  He initially looked to be an OSU lock, then committed to WVU, then changed to Iowa in the final month.  Next there were questions of his eligibility.  We've barely heard from him since; he didn't see the field until last season, and even then he recorded just six tackles, primarily in special teams action.  Now, as he enters his final season, he's still missing from the depth chart.  It looks like another year of special teams for Rowell, but the injuries and suspensions could give him a chance.

Micah Hyde (#18, 6'1", 170, Freshman) - It's not out of the question that a freshman corner sees the field this year, and Micah Hyde looks to be the most likely.  Hyde comes to Iowa with a universal 2-star rating as a high school quarterback in Fostoria, OH, with the typical MAC-heavy offer sheet (Michigan showed interest, but never made an offer).  Much like Castillo, he was offered in the last week of recruiting and signed on soon after.  There's no doubting his athletic ability; he posted a 4.45 fake 40 time.  Still, making the transition from high school quarterback to college corner isn't easy, and he'd almost certainly redshirt if it weren't for the lack of numbers in the defensive backfield.