It's Not Plagiarism If You Link To It Is Going Bowling

Share All sharing options for: It's Not Plagiarism If You Link To It Is Going Bowling 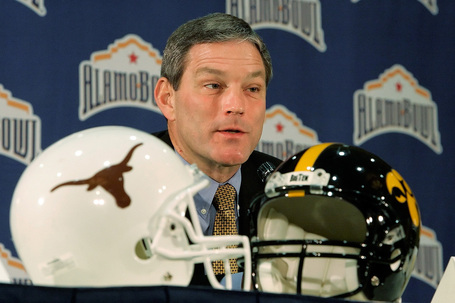 Forget the Alamo.  Throughout the summer, we've heard a slow, steady drumbeat for changing the Big Ten's bowl tie-ins, particularly with the middle-tier bowls.  Still, this one escalated quickly.  In the past week, the Alamo Bowl-Big Ten divorce went from "possible" to "somewhat likely" to "metaphysical certitude," as the Alamo offered $3 million to the Pac-10 for its second-rated bowl squad and left the Big Ten out in the cold.  I, for one, am not sad to see the Alamo Bowl leave.  While San Antonio is a nice city and a game against the Big XII is always welcome, the facilities were lacking, and the television broadcasts looked like Middle Eastern hostage videos (in case you were wondering, Iowa has played in 4 Alamo Bowls - more than any other team - holding a 2-2 record; both wins were against Texas Tech, so GUNS UP WOOOO).

Reports indicate the BXI is also completing its long-awaited separation from the Champs Sports Bowl, which is played in the same stadium as the Capital One Bowl and always felt like the little league game from The Bad News Bears in Breaking Training.

It didn't take long for plans to fall into place for replacements.  Jim Delaney, ignoring the historical significance of, and my personal preference for, the Holiday Bowl (in California!) is apparently THISCLOSE to striking a deal with the Gator Bowl in Jacksonville to take the Alamo's spot in the pecking order.  The Big Ten would shake out as follows:

Only Jon Miller is reporting this as a done deal, though.  The big hang-up is television; the Cap One, which is played at the same time as the Gator, has a clause in its contract requiring its second half be the only Big Ten game on television at that time.  That means someone has to move and, given the relatively early January 1 start time of the Rose Bowl, there are not many open time slots before the nation shifts its gaze to Pasadena.

FTW!  Week one lines are out.  Initial reactions:

WTF?  Big Ten baseball expert/MGoBlog contributor formerlyanonymous breaks down the Big Ten Network's television schedule of the truly non-revenue sports (soccer, field hockey, volleyball).  Guess who comes in last place for appearances?  Iowa's basement finish (tied with Indiana and Purdue) is attributable in no small part to the lack of a varsity-level men's soccer program; the Hawkeyes' appearances in the other sports is more-or-less in line with past performance in those sports.

No, I point formerlyanonymous' post out for this quote:

[UM] Volleyball is also going to be on CBS College Sports for the Runza/AVCA Tournament to start the year.  The tournament is being held in Omaha, NE and is more or less hosted by volleyball juggernaut Nebraska.  We face the Huskers in the first game and Kansas State, another team that is consistently ranked, in the second game.

Ah, Runza, how I miss you so.  The Runza sandwich, for the uninitiated, is a small loaf of bread hollowed out and filled with a heart-stopping mixture of ground beef, onions, and cheese, served with a side of crinkle-cut Freedom Fries.  It might well be the only reason to go into Nebraska that doesn't involve college baseball.  My guess is Runza signed on to be the corporate sponsor of this volleyball tournament as a scientific experiment: Spectators will be filled full of Runza, and we can all watch to see if the inevitable coronary gets them before they die of boredom.  It will be like The Running Man, only without any actual running.