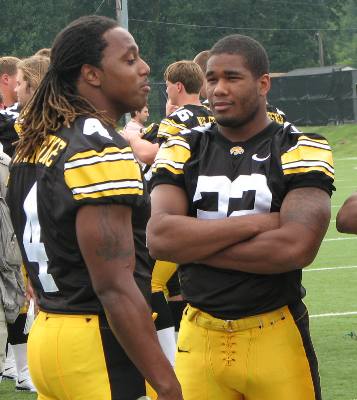 What started as a rumor has been more or less confirmed: Jordan Bernstine, the prohibitive pre-camp favorite at the non-Spievey cornerback spot, broke his ankle in practice this week and will miss some time, quite possibly the entire season.  The initial reports are not good:

"He was one of the gunners going down in [kickoff] coverage," Mihalovich [Bernstine's high school head coach at Des Moines Lincoln] said of what he learned from Bernstine’s mother. "I guess he was shuffling and rolled it over, snapped it pretty good."

The loss of Bernstine, who is an annual nominee for the OMG SHIRTLESS award but has had some injury trouble in the past, is not quite fatal.  Bernstine has a redshirt season to burn, and as BHGPodcast listeners know, many were convinced he wasn't going to win the cornerback job from Shaun Prater and would likely shift to safety before the end of September.  With that said, Bernstine's injury combined with Prater's 2-game suspension leave Iowa precariously thin at corner for the in-state openers.  Not exactly what you want when you're facing a top-notch I-AA pass-first spread offense and the guy who used to coordinate Rice's attack in the first two weeks.  Where have you gone, Willie Lowe?  Our nation turns its lonely eyes to you...

UPDATE:  Bernstine is done for the season, and will almost certainly redshirt.