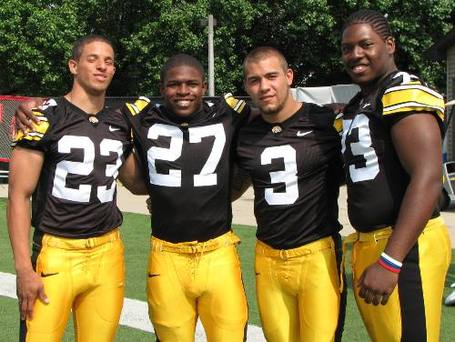 Friends Forever...Always Will Be Friends...

Tom McEvoy once said the World Series of Poker was, "hours of boredom interspersed with moments of sheer terror."  The same sentiment, slightly altered, could be applied to Iowa Media Day:  Hours of boredom interspersed with moments of actual news.  Media Day is a Don Doxie content wet dream, a neverending string of human interest angles on college kids who are ready to prove the critics wrong and achieve greatness, all of which go out the window the moment the ball is kicked.

There were moments, though, where the media cut through the glossy Nerf bullshit and got some information on this team, nearly all from the Ferentz press conference (which included such hard-hitting questions as, "How good is Amary Spievey?"  I'm not kidding.):

The Walking Wounded:  Jewel Hampton is 100%.  Jayme Murphy is not: the fourth-year junior "will be limited" this season due to a number of concussions.  Given how the staff handled Alex Kanellis two years ago, that's essentially the end.  Chad Geary's situation (torn ACL) does not look promising, nor does that of Joe Gaglione (the always-dangerous Italian shoulder).  Julian Vandervelde (bicep) will likely miss a couple of weeks as he recovers from surgery.

Fun With Depth Charts:  The big questions are no surprise: Running back, interior offensive line, defensive tackle, wide receiver, and backup quarterback.  Running back is Hampton's to lose, though nobody seems too sure he can sustain 25+ carries per game.  The rest of the depth chart is up for grabs.

Ferentz mentioned Adam Gettis and Markus Zusevics when talking about potential interior offensive linemen, though Zusevics is being groomed as a tackle and buried behind Kyle Calloway on the two-deep.  Gettis also gets some fluff from the SID.  Vanderverde acquitted himself well, disarming the press with wit and charm; there's clearly a graduate assistant job on this staff waiting at the end of his rainbow.  As for center, it's Raf Eubanks' spot to lose.  James Ferentz gets the obligatory "I'm working past my stupid mistakes of years gone by" column.

The defensive line rotation could be the most interesting part of the week one Hayden Fry lovefest/Northern Iowa game.  Ferentz mentioned, in order, Klug, Hundertmark, Daniels (who "can lift a house"), and Meade at defensive tackle.  There was no mention of Clayborn or Ballard moving inside (in fact, Rick Kaczenski said they aren't even discussing it), though there was plenty of discussion of the unblockability of Broderick Binns.  I still can't believe he won't start.

Wide receiver, as you can imagine, is all about DJK.  He's smiling, he's motivated, he's working hard, he's playing well, he's answering the questions the way he's supposed to answer the questions.  We've believed his demotion was a motivational ploy all along, at least right up to the point where Stanzi praised Marvin McNutt's pass-catching ability.  Given DJK's recurring fight with dropped passes, it could be that McNutt is actually that good.  In other wideout news, Stephane N'Goumou did not qualify and will attend prep school, and there's still no sign of whether Keenan Davis will redshirt.

The backup quarterback spot is still up for grabs between redshirt freshmen James Vandenberg and John Wienke.  With that said, Vandenberg got a lot of press.  As little as that might matter, when it is combined with persistent rumors of his slight lead in the race, it's difficult to envision a scenario where Wienke is first off the bench.  Barring THE HORROR in week one, we should have a far better picture by about 1:30 on September 5.

The Fluff.  Oh God, the Fluff:  The special teams are...special, according to UI sports information.  Nobody cares about that #21 ranking in the coaches' poll.  Nobody cares at all.  Everyone is focused and avoiding the distractions (this is classic Doxie).  The field turf looks great (that Hlas post also includes the quote of the day from KF: "It's really conceivable that we have a better team than last year, and a record that doesn't indicate that.")  KOK likes the way Morehouse asks a question.  Norm loses a toe "but wins big" (no, wait, THIS is classic Doxie).  The coaching staff talks about how long they've been a coaching staff.