Share All sharing options for: If College Football Programs Were Pro Wrestlers 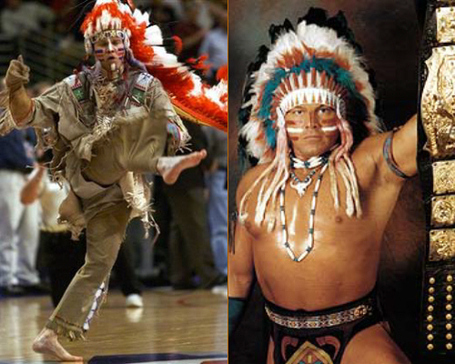 Best known for two or three years of relevance and absurd caricatures of American Indians. Sure, they like to dance around and everything, but we're kind of thinking that's not an actual Indian under all that inauthentic makeup and clothing. That's their only gimmick of note, seeing as how they suck pretty hard. 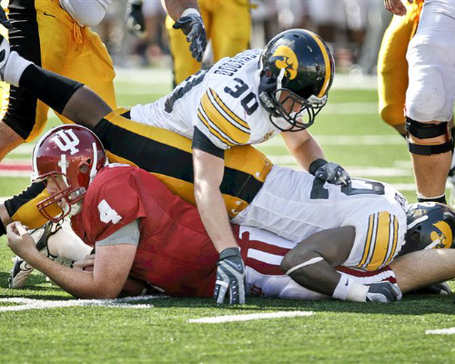 Sorry, but whenever we watch Indiana try to play football, all we see is a bunch of ankle-biters finding new and inventive ways to injuriously FAIL. Enjoy going 0-8 in the conference and being laughed at, little guys. 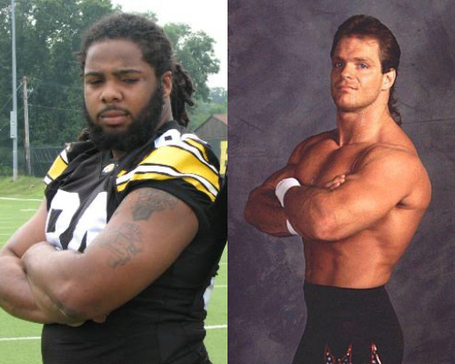 Widely praised for their technique and tenacity, which is enough to go far but not enough to completely overcome their athletic shortcomings. But if things go wrong? These guys tend to, um, "snap." And if they snap, things go horribly wrong. Some family troubles. 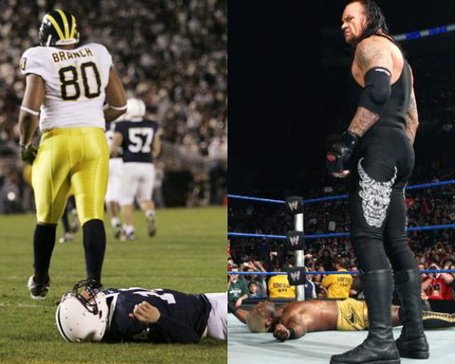 These guys have a look that's as distinctive as it is fearsome. But they feel right at home in a morgue, and that's not always a good thing. That's because for as good as they're supposed to perform, watching them go at it is pure agony, and fans rarely leave satisfied these days. Don't get us wrong, they earned their legendary reputation, but they did so long ago; now it all seems a little, well, 20th century. 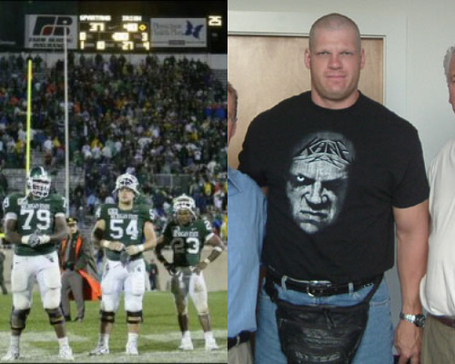 But for as much as we bag on the last guys, at least they've, y'know, made it; their little brothers, on the other hand, are nothing without their sibling rivalry. You keep thinking that by all rights, they should be better than they are. But they're just never going to get out of that shadow or otherwise compel a casual fan to cheer for them, which is as classic a case of Little Brother Syndrome as you'll ever find. 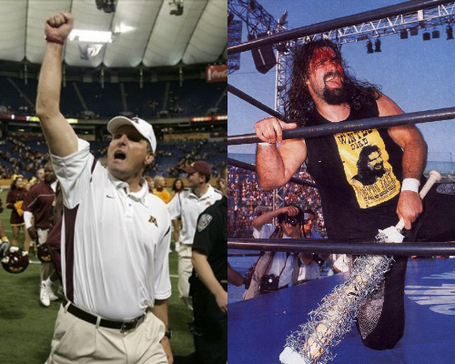 Yeah, they were good... a few decades ago. Now they just dress terribly. And they lose a lot, usually in bloody, gruesome fashion (whether they actively choose to be so brutalized is up for debate). To top it all off, they're probably clinically insane. For example, if it came out that Tim Brewster uses a sock puppet in his recruiting process, on a scale of 1-10, how surprised would you be? We rest our case. 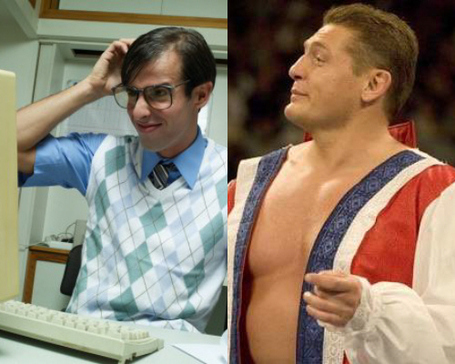 Let's see, swimming in money, not-so-secretly wish they were in England, can quote Shakespeare from memory, and an absolutely abysmal record of success? Too easy. 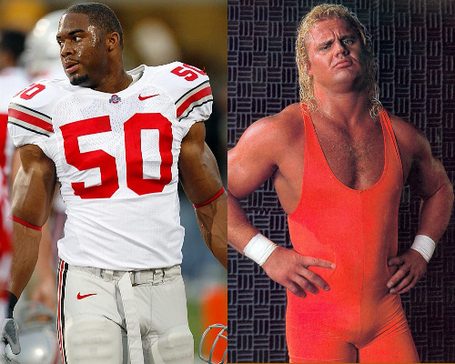 Fuck, they're good – just ask them! Won't tolerate any talk of failure, and usually—usually--their performance lives up to that end of the bargain. But that only makes it so much funnier when they lose, and fans of the sport are actively aware of this fact. 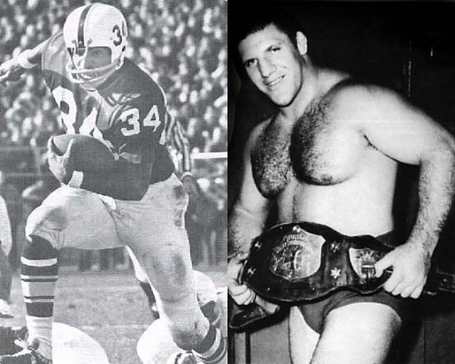 A longtime heavyweight of the sport who

THIS SAMMARTINO, WHAT ETHNICITY PLEASE

JUMPING JACK HAM IN A TUTU, THAT IS THE WORST KIND

I hate to be presumptuous, but I'm pretty sure "Paterno" is Italian too.

YOU PROBABLY SHOULDN'T TRUST ME AROUND YOUR VALUABLES AND CHILDREN THEN, THERE'S NO TELLING WHAT MY PEOPLE HAVE RAISED ME TO DO 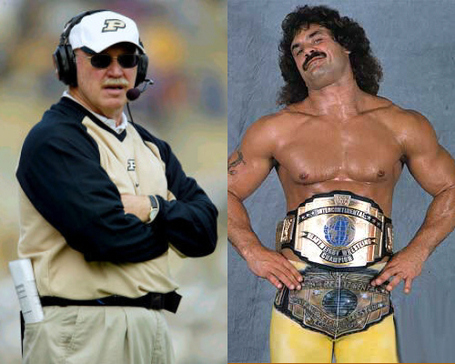 Committed to making the moustache their own, for better or for worse. Often worse. All things considered, a unique but still pretty bad nickname. Rather successful in their heyday, but they've been dead for years. 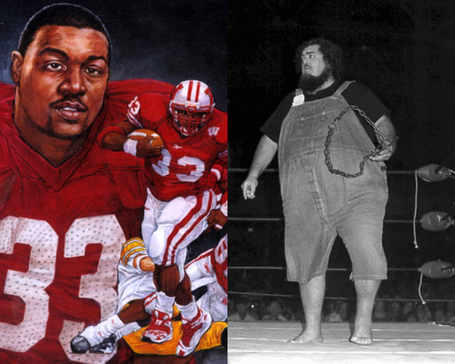 Home of the 390-pound left tackle, the numerous 250-pound tailbacks, and the rapidly swelling head coaches. If you're going to do it, do it fat, and let your surgeon sort your arteries out. 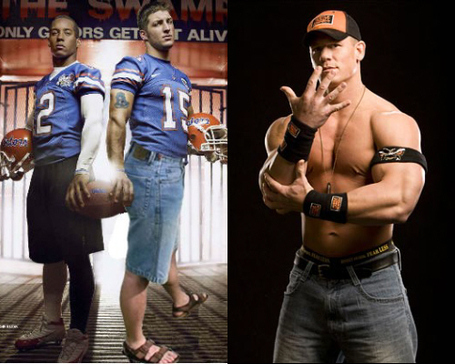 We know. We know. JORTS ARP ARP ARP. Stick with us.

Let's see. Only "cool" to people with an extremely limited frame of reference. Quite OMG SHIRTLESS. And this HLR (Honor, Loyalty, Respect, for the non-WWE heathens among us) business is functionally no different than Tebow and his "Ricardo 50:32" or whatever eyeblacks.

But wait a second. Doesn't Floricena need a powerless foil whose sole mission is to make obvious jokes and get waxed every time they compete? Oh yes, here we go. 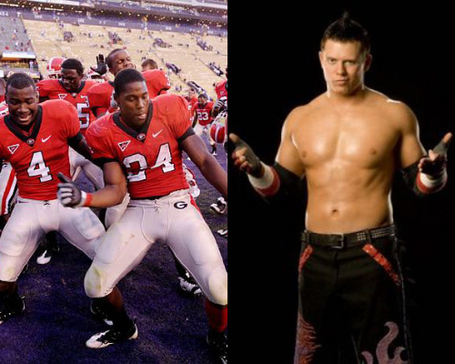 Soulja Boy? Dancing in the end zone? Weird, sounds like that silly posturing The Miz does before his matches. Usually, it does no good. Sorry, but mouths don't win titles—not like that'll stop you. ARP ARP ARP. 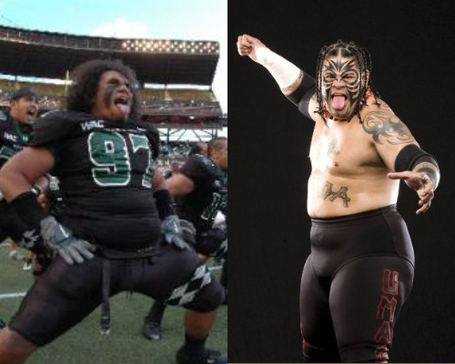 Distinc    tive, to say the least. We get the feeling that they're playing up their Polynesian heritage just a bit too much. Moreover, fans are usually asleep when they're going at it, though at least Hawaii has the excuse of kicking off at 2 a.m. ET. Got one shot at the big time and got rocked straight back into oblivion. 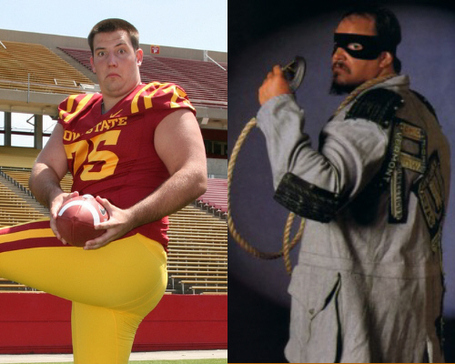 God fucking damn it, do they ever suck. 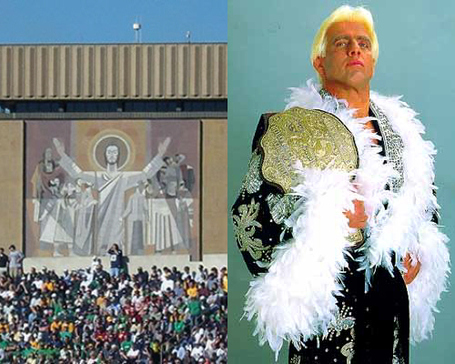 The golden boys are best known for dominating the 1970s and engaging in casual, excessive self-adornment. But the glory days are long since gone, unlikely to return even as they make careers of beating up on the dregs of competition. Do they belong in the discussion for "best ever"? Absolutely, and there's no denying their decades of history at or near the top. But it's not 1983, it's 2009, and their reign is effectively over. 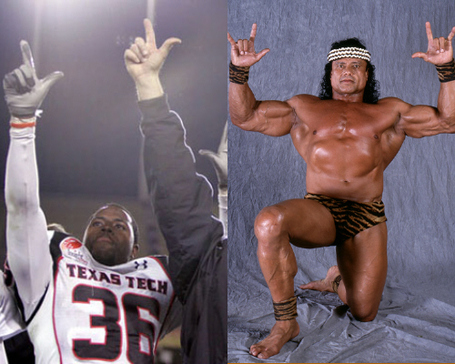 Some of the best crowd-pleasers in the game; if somebody's trying to get into the sport, pop in a tape of their highlights and let the magic happen. Novices will enjoy the unconventional nature and the simple, familiar hand signals. Still, you may want to stop cheering for them once you hit your 13th birthday, since the gimmick gets old and they've never won a goddamn thing when it mattered. 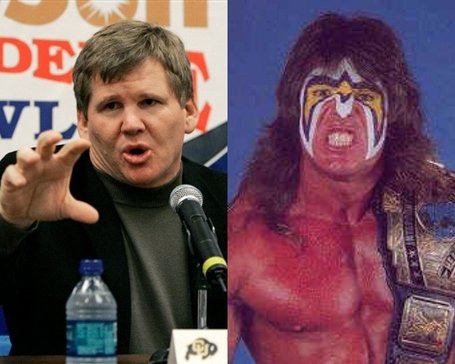 Okay, between Hawkins and Warrior, which person said what?

PERSON A: "Do the unthinkable, everything's possible, reinvent yourself by getting better."
PERSON B: "What we must do is beyond us."

Yep. If you can't figure it out, we're not telling you. Other than that, they won a title in the early '90s with the help of a missed call and they're pretty much a running punchline these days. 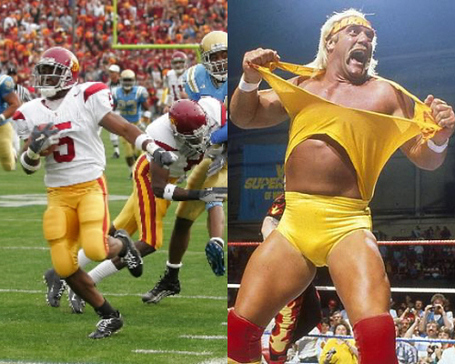 Owners of the most recognizable theme songs in the game, and really, really committed to those McDonalds colors. Still, you can't argue with results, and they've spent years in near-perpetual untouchability. Perhaps it's the irrepressible personalities and dogmatic adherence to a way of life. Yes, it's vastly and grossly unfair to compare A Better L.A. to Hulkamania, but we're not about fairness here at BHGP, and you should know that by now.

This means, of course, that the next comparison is inevitable: 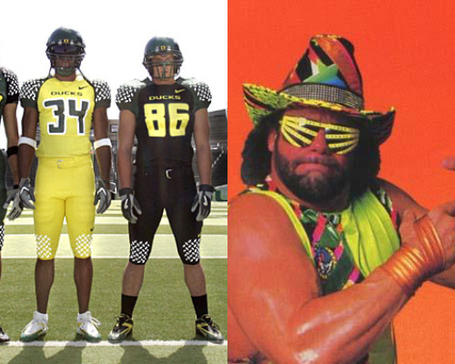 Self-caricatures with someone very attractive in their corner. Look, they weren't bad—far from it, actually, with more time spent successful than most of their peers. But it always seemed like though each side always had more immediate rivals elsewhere, at the end of the day, their nemesis was Hulk/USC, one to whom they were destined to lose over and over. And while fashion was always at the forefront for these guys, it seems like they're trying a little too hard to be "futuristic," while history will look back on it more as a diarrheic excess of flash and modern sensibilities than anything approaching avant-garde (or even progressive). Shame, really, considering their prodigious talent, but they've nobody but themselves to blame for the dominant theme of their legacy. 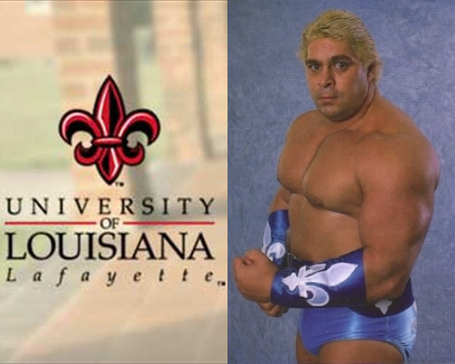 Fond of the Fleur de Lis for some reason, never amounted to anything at all, known mainly for their proximity to someone of considerably higher stature, and you wouldn't be one damn bit surprised to find out they'd been shot to death by a cigarette-smuggling mafia operation.

And that "someone of considerably higher stature"? 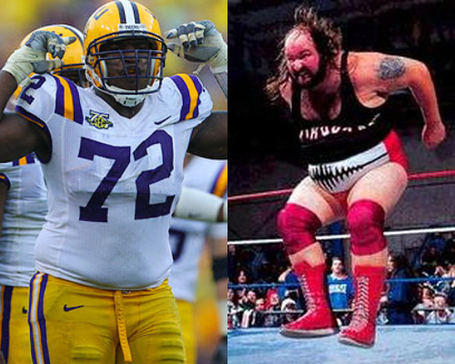 Oh, no earthquakes in Louisiana, you say? No, not unless you count 1988, when Death Valley shook so loudly after a late, game-winning touchdown pass that it set off a seismograph 1,000 feet from the stadium. Also, believe it or not, Earthquake (ne John Tenta) actually wrestled at LSU.

We probably don't need to explain the Typhoon half of this team, of course.

All that aside, these guys were on the top of the game for a few years. Can probably drink you straight under the table without cracking a buzz. Definitely not somebody you want to go face-to-face with under any circumstances; you'll regret it for one reason or another. 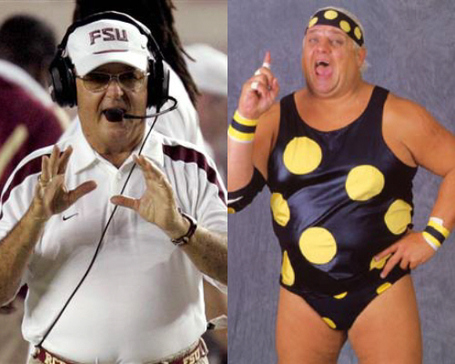 Okay, we're pretty much sticking to Bobby Bowden on this one, but come on. Former titan of the game who devolved into a Southern-gibberish-talking blob of a human being. Put two kids in the industry, neither of whom proved to be very good. Stuck around at least five years past his last moment of usefulness. 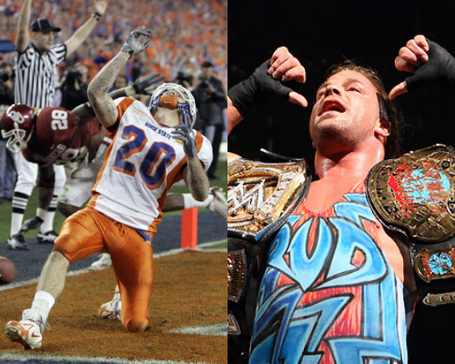 Underrated? Maybe by the powers that be, but not by enthusiasts of the sport. Either way, once you get past the kinda dated, unconventional appearance, you realize what a show they put on. Never a superpower, but they're always up for a shot at the big boys – especially because they know they'll have the fans at their back. 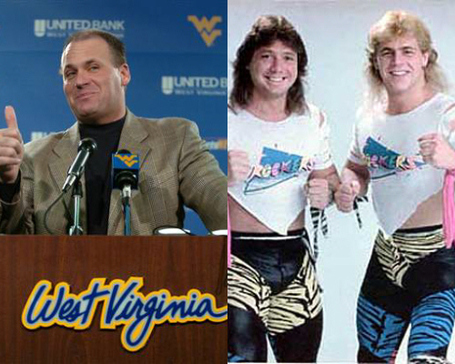 Best known for coming out of nowhere and being one of the most exciting, decorated  teams of their time. Still, it got pretty obvious that someone was bumping up against the ceiling of their potential. So, one acrimonious departure later, the team was split up. And yes, that makes Bill Stewart Marty Jannetty; we didn't make Michigan Shawn Michaels, though, because Shawn Michaels has actually done something since 2006. 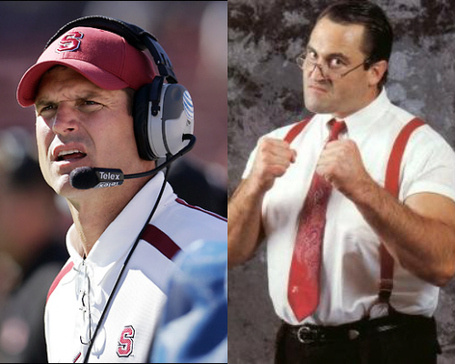 Reportedly experts with money, and they've got one of the most entertaining characters in the game. but that doesn't change the fact that they're pretty bad. No, check that, very very bad. Only real geeks even know what the hell their theme song even sounds like. 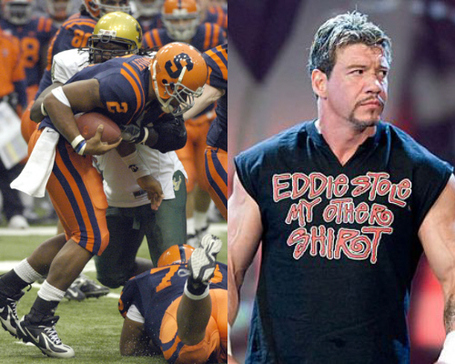 They were orange and strong – strong to quite strong. Then they died.

You'll notice there's a ton of programs and wrestlers we didn't address. If you've got one we missed, by all means, leave it in the comments. If it doesn't suck, we'll add it to the collective. But please, make it accurate; if we're going to compare our own team to Chris Benoit, don't try to convince us Bret Hart and his "best there is, best there was, best there ever will be" properly applies to, like, Missouri. Bring it, kids.