Share All sharing options for: Assume the Position 2009: Linebacker 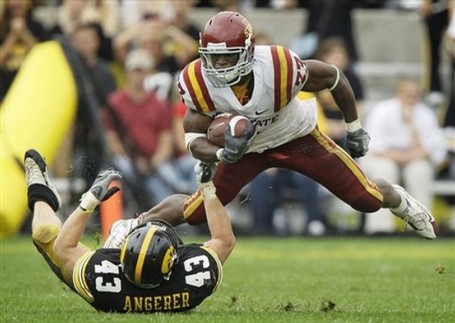 The three positions covered so far were all quite different than linebacker.  Quarterback, the tackles, and the safeties are manned by returning starters with no serious competition from below.  While all three starting linebackers return from last year, two have legitimate, somewhat-proven players beneath them (it was three, of course, before this happened).  We even have our first serious position battle to discuss.  While those other positions have entrenched starters, they do not have nearly the depth of the linebacking corps.  What I'm saying is, we have a lot to discuss.

MLB: Pat Angerer (#43, 6'1", 235, Senior) -  When it's finally written, The Epic Saga of Pat Angerer will be positively Dickensian:  It was the best of times, it was the worst of times.  It was the season of Light, it was the season of Darkness.  It's fairly safe to say that no player on the current Hawkeyes has faced more adversity over the course of his time in Iowa City, and it's painfully obvious that nobody has overcome adversity more effectively.

It was virtually unreported at the time, but Angerer was THISCLOSE to quitting football and leaving Iowa after the 2007 season.  He had just faced a neverending string of injuries, illnesses, and bad luck.  He moved from the weakside to the middle, then sat on the sideline and fought mono while Jacody Coleman, a true freshman, fought for playing time with Mike Klinkenborg.  Any reasonable human would have looked at the depth chart, seen that they were stuck behind a younger player, cut their losses, and went home.

Pat Angerer, it turns out, is not a reasonable human being.

Despite recording just one tackle in his sophomore season (and that being on special teams), Angerer chipped away at Coleman's lead during the spring.  Even though he was still officially listed as the backup, Angerer started the spring game and did not go unnoticed.  By week 2 of the regular season, he was the starter and never let up.  He finished with 107 tackles, 6 TFLs, 1 sack, and 5 interceptions.  Angerer is even more important this season, without Kroul and Unusual Punishment anchoring the middle of the line.  I would expect a slight uptick solely for that fact, and another all-Big Ten campaign for arguably the best middle linebacker in the conference.  Not bad for a guy who just about gave it up.

OLB:  A.J. Edds (#49, 6'4", 245, Senior) -  Something funny happened in 2008 to the best coverage linebacker in Iowa history: Everybody avoided him.  His tackle totals fell 25%, from 80 to 59, while his other statistics remained steady (though he did record the first two sacks of his career).  In a list of possible reasons for this slight downtick in production (better play from the front four against the run; opposing offenses focusing on attacking the safeties rather than the linebackers; Angerer sucking the wind out of the room), any actual diminution in effort or ability should be at the very end.  The fact is that - especially early - teams avoided Edds like the plague, and for good reason.  He is the only linebacker on the team (and the most effective I saw in the conference last season) who can successfully cover most slot receivers in man-to-man (not that it's really necessary in Iowa's defense, but it's there nonetheless) and still shirk blocks from tight ends like they weren't there.  A linebacker with Edds' size, agility, and technique should be playing on Sundays.  If his production returns to 2007 levels, he just might.

WLB:  Jeremiha Hunter (#42, 6'2", 235, Junior) and Jeff Tarpinian (#33, 6'3", 235, Junior) - One year later, it's the same position battle, only in reverse.  Tarpinian, a former high school option quarterback who added about 50 pounds (mostly in hair), entered last fall as the prohibitive favorite to start on the weakside.  He then suffered a hamstring injury in August camp and didn't see the field until Northwestern in week 5.  By that point, Hunter had established himself as the starter, and the competition was effectively over.

Jeremiha Hunter, a highly-sought recruit from Pennsylvania when he graduated high school in 2006, finished the campaign second on the team in tackles (80), including 5 tackles for loss, and threw in an interception and fumble recovery for good measure.  He showed good instincts for a first-time starter (effectively a first-time weakside linebacker; Hunter entered the year with only 10 tackles, all on special teams or as Edds' backup at OLB), and improved as the season progressed.  If it weren't for Angerer's miracle season, Hunter would have gotten a lot more publicity.

Instead, he gets to fight for his place on the team.  The oft-injured Jeff Tarpinian is back to 100% and is probably sick of playing special teams.  Tarp recorded only 17 tackles last year, mostly in garbage time or on kick/punt return defense.  If he doesn't win the WLB spot, he might be the prime candidate for a move to middle linebacker, especially given the fact that Angerer is a senior and Hunter will block Tarpinian from the top line unti the day he graduates.  He has the love of the coaching staff, who routinely talk up his ability and heart.  If they can find him a place to play - a big if - they won't think twice about using him.

Tyler Nielsen (#45, 6'4", 232, Sophomore) - Nielsen won the job backing up A.J. Edds as a redshirt freshman; given his size and agility, he'll be the heir apparent to the OLB crown, and should be ready to take the throne in 2010.  Nielsen spent last year primarily on special teams, recording 12 tackles and impressing the masses at times.  There's no denying his ability; one more year of seasoning and we should have a peaceful transition on the strong side.

Troy Johnson (#48, 6'2", 235, Junior) - On the other hand we have Johnson, a redshirt junior without a home.  He's technically the co-second string OLB, but has almost certainly been left behind Nielsen's steady rise.  He has the build to play in the middle, but he might not have the staff support to supplant Tarpinian, should he make the move over.  It's not to say he's a bad linebacker; that pass breakup against Iowa State was crucial, and there were some flashes of brilliance in his limited playing time last year.  It's just that he's a victim of depth, the sixth wheel on a depth chart that really only needs five.  We nicknamed him Montressor last year; looks like he's still in the wine cellar.