It's Not Plagiarism If You Link To It Holds Its Breath

Share All sharing options for: It's Not Plagiarism If You Link To It Holds Its Breath 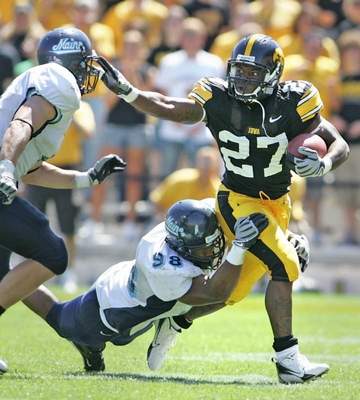 No Comment.  Yeah, we know about this.  There's no confirmation from the coaching staff, so we're holding out on the story, but the internet sources aren't ones with a history of playing loose with the truth.  Morehouse is also getting prepared; that's usually a sign to buy canned goods and head to the basement.  Of course, we blame Hinton.

Wherefore art thou, Jacody?  Remember the Jacody Coleman redshirt saga?  As a refresher, about 2 months ago, backup MLB Jacody Coleman was stuck behind Pat Angerer and prepared to transfer, but instead decided to burn a redshirt season this year and compete for the position after Angerer's graduation in 2010.  It was apparently resolved, only, no, it wasn't.  Coleman is again transferring to a school closer to his home in Texas.

Losing a player is almost always bad for a program (Thanks, Captain Obvious! -- Ed.), but the Coleman transfer is especially damaging.  Angerer hasn't exactly been a picture of perfect health, and there is no ready-made backup at middle linebacker.  Our guess would be Troy Johnson moves over from the strong-side (we'd like to see Tyler Nielsen get a look, but he's too perfectly-sized at OLB), or Tarpinian becomes the all-purpose backup at both WLB and MLB.

We were working on two Assume the Position posts over the weekend: running back and linebacker.  Needless to say, they are both in embargo for the moment.

Iowa Basketball: Catch The Fever!  While UCLA demands its basketball ticket holders donate $500,000 to the university for the right to sit courtside, Iowa is thinking about running a blue light special:

Barta faces sort of a Catch-22 dilemma in that the team needs more fans inside Carver-Hawkeye Arena on a regular basis in order to help it get better under coach Todd Lickliter.

But the problem is that many fans won't come to the games on a regular basis until the team gets better.

Unfortunately for Barta, Iowa has combined to lose more games (36) in the past two seasons than during any other two-year stretch in school history....

Barta has to give fans a reason to endure the bad weather and everything else that goes with attending an Iowa basketball game in the winter.

He has to make it cheap enough that many fans won't be able to resist not going, because after all, it's still the Iowa men's basketball team and it's still the Big Ten Conference.

Harty goes on to propose one of the dumbest things I've ever heard:  Set a base price of $10 per ticket, only raise the price $1 for every win over 10.  The Harty Party, who has apparently never paid money to see a game, doesn't realize that most fans purchase tickets long in advance of the day of the game.  You want even more empty seats than last year?  Tell people they can buy tickets now for $10, but could pay $15-20 for them in February.  Fans (especially out-of-town fans) will buy their tickets now for games they might attend, and if the season goes south, stay home.  Prices that low would also kill the market for low-level scalping; the typical single-game ticket holder might stand outside CHA in mid-January to get the $54 face value for his unused seats back, but is unlikely to do the same for $20.  Combine the two, and you could see more empty seats than last season.

That's not to say a bargain-basement price doesn't make sense in one context: Ticket packages.  Not only would lower ticket package prices increase attendance (package purchasers are local, and are more likely to attend even when the team stinks), but it could alleviate the unintened side effect of last season's decision to lower late-season prices.  I know a number of long-time ticket holders who paid $27 per seat, only to watch the seat next to them go for $10 in February.  Most of them have looked at the off-season carnage, expect more of the same, and are declining to pick up tickets for next season.  Tell them they can buy those seats for $10 and I guarantee they'll change their minds.

Footnotes   Iowa State WR Wallace Franklin hit with his third arrest in 15 months and kicked off the team.  Cyclone Fanatic (which you may remember from breathlessly-worded punctuation-free posts about every Iowa arrest) doesn't mention it on the front football page and is more preoccupied with who will play running back for us.  Tomahawk Nation posts the Vegas over/under season win totals; Iowa is at 8, which is exactly right.  We missed this when it happened, but J Leman apparently signed with Carolina.  Rock M Nation lampoons the Illini.  And readers of my old blog will recognize this topic:  The effect of the 2006 internet poker law on the field sizes at the WSOP.