Arrelious (which somehow gets inexplicably shortened to "Rejus") Benn has a problem.  And that problem wears black and gold.  Remember this choice quote from nearly a year ago?

Q:  How about your least favorite moment?
A: Losing to Iowa. I hate Iowa.

At the time, it made a bit of sense.  A middling Iowa team had knocked off a much higher-ranked Illinois team and handed them a loss that ultimately kept them from sharing the Big 10 Championship with Ohio State.  Then again, it's not like that loss really did that much damage - Illinois still made the Rose Bowl and got to be USC's designated Big 10 Sacrificial Lamb.  And Benn actually had one of his best statistical games of the season (4 catches, 87 yards).

But you might think that a year later, after having avenged that defeat in Iowa City, and with no more games against Iowa on the slate while Benn is at Illinois, he might have gotten over his hatred of all things tigerhawk.  According to the Harty Party, nope.

"For some reason, I've just always hated Iowa," Benn said at the annual Big Ten Kickoff Luncheon on Tuesday. "I do not like Iowa."

Benn not only hates the Iowa football team, but almost everything associated with the program, from the school colors to the pink visitor's locker room at Kinnick Stadium.

He says it stems mostly from the fact that the Iowa fans charged on to the field at Kinnick Stadium after the Hawkeyes upset Illinois 10-6 in 2007 when Benn was a freshman.

"We probably would have charged the field if we were in the situation they were in at that time," Benn said. "But I think a lot of it is they charged the field in Iowa City. And the locker room was pink and hot. I just didn't like it.

"And that game we should have won."

Man, if the fans rushing the field after that Illinois game in 2007 (and I was there - that was a pretty tame rushing the field experience, as those things go) ticked him off that much, it's a good thing he doesn't play for Penn State.  Or, worse yet, Minnesota:

But overexcited Hawkeye fans?  Pink locker rooms?  "Stealing" wins?  These aren't the true sources of Benn's rage.  But I know the truth.  He's still bitter that he and the Illini got shown up one man: 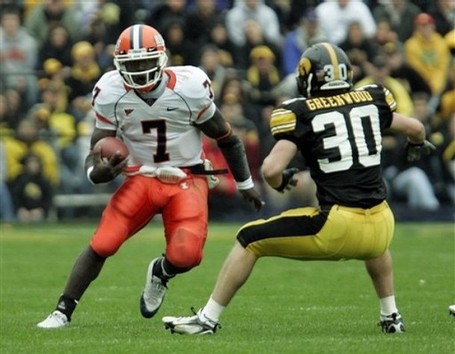 EPIC GREENWOOD.  He'll be waiting for you on Sundays, Rejus.

(Yeah, I know that's Juice in the picture, and not Benn.  And that McGee actually threw the INT to Greenwood.  The interwebs failed me in my attempts to find a more technically accurate picture or video.)