Share All sharing options for: It's Not Plagiarism If You Link to It Doodles on a Tablecloth

Loose, non-Media Day ends from the past couple of days: 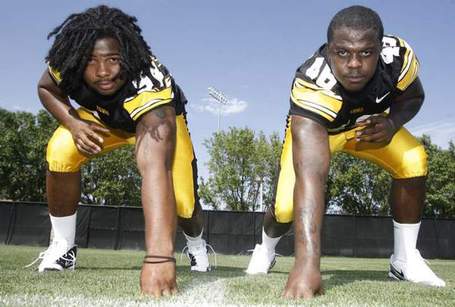 No surprises at defensive end.

Still no decision on backup quarterback or the full rotation at defensive tackle, though a decision on either at this point would be a shock.  Rafael Eubanks has the top line at center and Jordan Bernstine at left cornerback, though it remains to be seen how concrete those two positions are.

ROOSEVELT RAN THE SPREAD ON THE DIRTY SPANISH.  Hail to the Orange's Toki Wartooth scores the story of Big Ten Media days: JoePa diagramming the 1942 Brown offense on a tablecloth:

Then I noticed that in front of Paterno, right next to his cup of coffee there was something written on the table cloth So I took a picture with my camera phone.

Can you tell what it is? Thats right its a play diagram.

Apparently Paterno wanted to demonstrate some of the intricacies of the spread offense to the reporters. The story was related as follows by one the photographers who heard the whole thing. (Note: All of this is paraphrase, not direct quote)

Joe wanted to show the reporters that the spread offense was nothing new, in fact according to Joe, "we were running it back in the '40s!"

Joe then proceeded to draw up an example of how he would run the backfield at Brown, drawing it up on the table cloth next to his coffee with a pen.

Paterno went on to describe how the single wing went out of fashion when those damn flappers took over the country and, much like the buzz fade and the Lord our Savior, only came back with the ascention of Tim Tebow.

They go X-Ray When Hayo Carpenter is on Campus.  "Big Ten Snark of the Week" is not a sanctioned conference award, but it should be, and it should be given to Storminspank this week and throughout the month of August for this little bit of brilliance:  Brewster Goggles!  Not only do they make Eric Decker look like Jerry Rice, but they make all chili look hot and all sportswriters look morbidly obese.